The MAVEN launch is perfectly timed for me, coming from Canada. We just got our first downpour of snow a few days ago, so a drive to Florida was a great escape...or so I thought. It started raining as soon as I crossed the Florida border.

I am attending the MAVEN launch at Kennedy Space Center (KSC) as part of a "NASA Social" event. NASA Socials are geared towards space enthusiasts of all backgrounds who are active on social media to increase public awareness and excitement about NASA. Seventy-two NASA Social events have been held over the past four years, with today being the 4th anniversary of their first event. More than 100 people attended the MAVEN NASA Social, ranging from accountants to computer scientists to teachers to former space shuttle employees (but no one else representing Canada except me). It was really exciting to have such a diverse group brought together over their mutual love of space exploration! 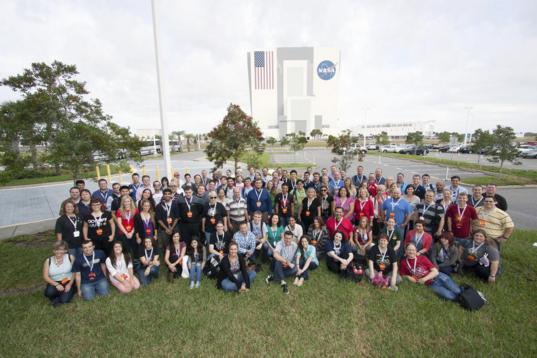 In the morning we toured the sprawling KSC complex. We visited the Vertical Assembly Building, or VAB, the 40-story-tall tower in which launch vehicles are assembled. At one point, it was the largest building in the world by volume. Then we piled onto buses to rush over and catch MAVEN rolling out to the launch pad. Along the way we passed Pad 39A, KSC's last remaining shuttle launch pad. As the shuttle has been retired, the pad is no longer in use and is slowly being cannibalized for parts for other systems. It was a bittersweet sight to see. 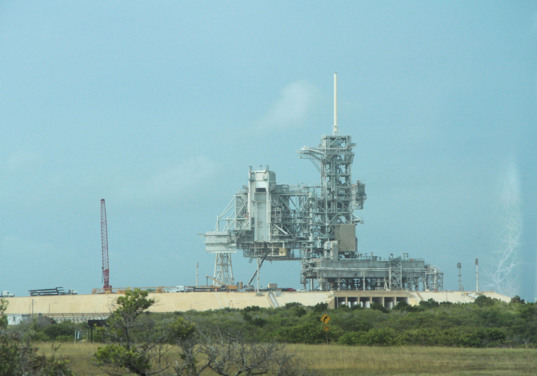 The MAVEN rollout was surprisingly fast, relatively speaking. I had expected the slow crawling speed of a shuttle being towed. As the launch vehicle suddenly appeared in our view, the crowd uttered gasps and "wows". We all stood there in awe, collectively snapping hundreds of photos. 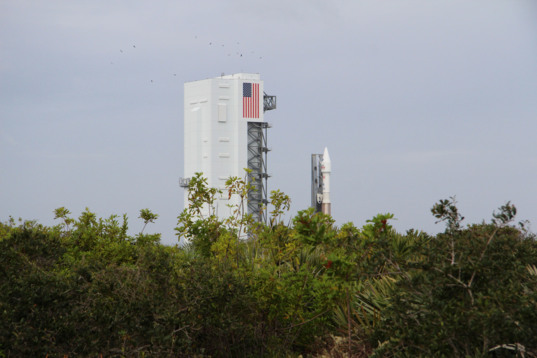 MAVEN rolling out to the launch pad

Our guides herded us back onto our buses to continue the tour. We stopped at the United Launch Alliance mission control center, where folks were "babysitting" MAVEN (alas, no photos were allowed). We stopped again at the Orion/SLS assembly building, where photos were also not allowed. Inside the Orion building, where engineers were welding the capsule, nearly the entire floor of the high bay is essentially a giant air hockey table, allowing a single person to move pieces of equipment weighing over 20,000 pounds!

After a few more stops and a lunch break, we reconvened in the Operations Support Building for an afternoon of talks and Q&A sessions from a variety of folks. The entire session is available to stream on YouTube here.

First to speak was Jim Green, NASA's Planetary Science Chief. He gave a broad overview of the current direction of the Mars program, touching on the upcoming NASA and ESA missions such as InSight, ExoMars, and, of course, MAVEN. He referred to most of the folks in the room as the "Mars Generation," and said that he expected to see humans on Mars because "that is our destiny."

I asked Green a question about why MAVEN does not have a camera on board (around 19:52 in the video if you care to watch me embarrassingly mess up my own Twitter handle on live television). He replied that MAVEN does possess an ultraviolet imager to take images the likes of which have never been seen of the Martian atmosphere, but it does indeed have no surface imager, which is what I was referring to. From a public engagement standpoint, it seems to me that it would be more difficult to get the general public excited about a mission that doesn't take surface photos. 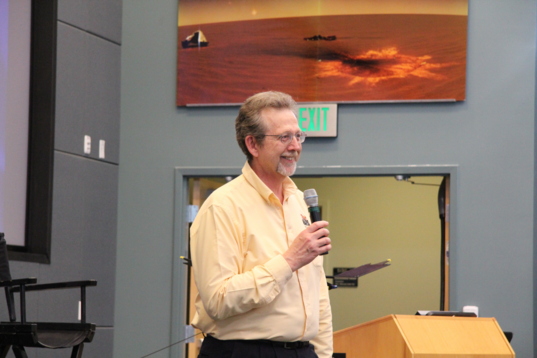 A panel of MAVEN mission scientists followed Green: Lisa May (program executive), Kelly Fast (program scientist), Sandra Cauffman (deputy project manager), and Chris Waters (system design lead with Lockheed Martin). It was a fantastically engaging panel, and it was refreshing to me to see so many women. May and Fast are both excellent role models for women in science and technology fields. May was engaging, funny, and personable, and a super genius. Fast took a semi-hiatus to have a family but kept working part-time, "even if it was just 10 hours a week" according to her, and came back into the workforce and is now the program scientist for MAVEN. It was wonderful to see a woman who managed to balance work and home life, and was able to return to the workforce and become highly successful after her hiatus. Cauffman also had an inspiring story. She grew up in Costa Rica and moved to the U.S. in her early 20s; she said she never could have dreamed that she would end up working for NASA.

Since MAVEN focuses on Mars' atmosphere, the question of the elusive Martian methane came up. Kelly Fast answered that MAVEN does not have a methane detector and will therefore not be able to answer the question of whether or not methane is indeed present in the Martian atmosphere. India's recently launched Mars Orbiter Mission (MOM), which arrives at Mars within days of MAVEN next year, does possess a methane detector. It might be able to shed some light on this mystery. 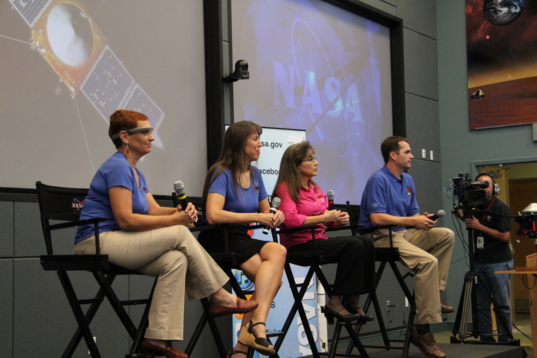 A couple of United Launch Alliance folks spoke about the technical details of the MAVEN launch. Next up was John Grunsfeld, former NASA astronaut and current Associate Administrator for the Science Mission Directorate. He talked about NASA's future at Mars and beyond, expressing his desire for missions to Europa and the other icy satellites. A few of the NASA Social folks in the audience are Mars One applicants, and one of them asked Grunsfeld about that program. He replied that there should not be a rush to get humans to Mars, noting that it's easy to get to Mars quickly and die—the tricky part is surviving to be able to explore. 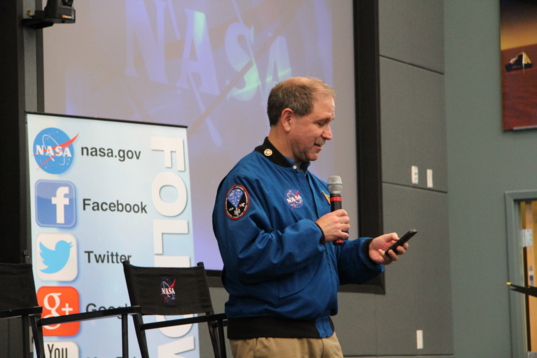 John Grunsfeld tweets a photo of the audience

After Grunsfeld, the afternoon was peppered with talks by engineers about Orion/SLS, NASA Chief Scientist Ellen Stofan on communicating with the public and congress, a NASA astrobiology on seasons throughout the solar system. But the most  popular talk was on PhoneSats. These satellites were built entirely with off-the-shelf components, can be controlled by amateurs via radio, and can be made within a budget of thousands of dollars (launching them of course is a different story). The antennae on the sats that were shown to us were made of stiff measuring tape. MacGuyver would be proud.

That wraps up day one of the MAVEN NASA Social! If you want to keep up with what's happening live, follow me on Twitter (@tanyaofmars) and/or watch for the hashtags over the weekend #MAVEN, #NASASocial, and #AtlasV. Check back tomorrow for a recap of day 2's events!