It was announced this morning that The Planetary Society’s very own Bill Nye will be trading in his trademark blue lab coat and bow tie for something with a few more... no, make that a whole lot more... sequins. That’s right folks, Bill will be appearing as a contestant on the American hit show, “Dancing with the Stars”.  OMG, I am so excited.

For those unfamiliar, the format of this reality competition is fairly straightforward: each star (e.g. Bill Nye) is paired up with a professional dancer (Bill’s partner is the beautiful and talented Tyne Stecklein) and given specific ballroom dances to learn. Every week the star and their pro-dancer partner perform a new dance and are judged by a panel of experts, and every week the star with the lowest judge’s score combined with an audience telephone-based vote gets the boot. Eventually a winner is declared and handed a very shiny “Mirror Ball Trophy” that looks a little bit like an iron meteorite and lot like a disco ball glued to a stick.

"How will Bill fare?" you may ask. Consider the following: Bill is an avid swing dancer who is a frequent fixture on the Los Angeles dancing scene. He’s also had some experience in recent years staying remarkably balanced when negotiating bumpy political ground, and he’ll really know how to use Newton’s laws of motion to his advantage. I have no doubt he will be a formidable contestant, and I will be enthusiastically tuning in to vote for him. (If you'd like to vote for Bill too, here's how.) For those of you who’re more likely to spend your evenings watching the cosmic dances of celestial stars than Dancing with the Stars, I’ll be providing occasional short recaps here so that you can still keep track of Bill’s progress on the show.

We wish him the best of luck!

The 17th season of Dancing with the Stars premieres Monday, September 16 on ABC. 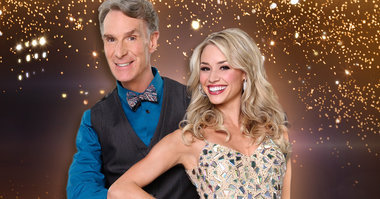