NASA's "crown jewel" probe to explore the Sun and its complex interior mechanisms in unprecedented detail, the Solar Dynamics Observatory or SDO, roared into space on February 11 atop a powerful Atlas V rocket at 10:23 AM EST from Cape Canaveral Air Force Station in Florida. The blast off from Space Launch Complex 41 occurred precisely on schedule, following a 1 day delay due to gusty winds at the launch site, which moderated just barely enough to permit liftoff. 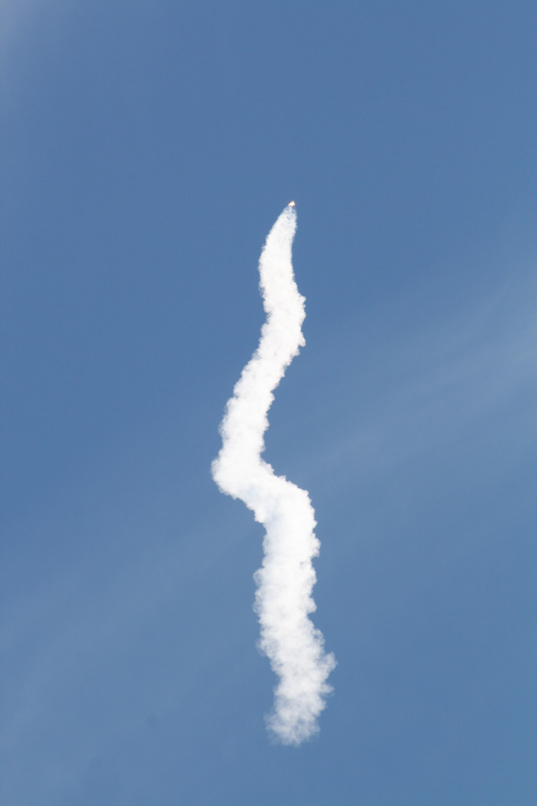 SDO soars to space from KSC atop Atlas V rocket. This was the 100th launch of a commercial Atlas/Centaur.

I witnessed the blast off of the pencil like rocket into beautiful blue skies and scattered wispy clouds from the Press Center at NASA's Kennedy Space Center which lies adjacent to the iconic Vehicle Assembly Building and about 4 miles from the launch pad. Top SDO science team members were on hand to view the culmination of their work which began over a decade ago.

The full fury and reverberation of the blast off of the 191-foot tall rocket reached us at the press site a few seconds after ignition of the mighty Russian made first stage engines, as the booster cleared the launch tower and soared straight upwards to space destined for geosynchronous orbit more than 21,000 miles high. The crucial deployment of the solar arrays required to generate power took place as scheduled two hours later.

I was quite excited to be with the SDO science team as they watched NASA television monitors streaming live updates and jubilantly received word of a successful completion of the second Centaur upper stage firing and spacecraft separation.

SDO had been rolled out to its seaside Florida launch pad on Tuesday, February 9, in anticipation of a Wednesday morning liftoff. I watched the rocket rollout under gloomy skies and observed the erected Atlas V rocket and SDO directly at the pad in the midst of a rainstorm. It was absolutely thrilling to see this nearly $1 Billion spacecraft hardware up close in its final hours left on Earth before the planned launch. 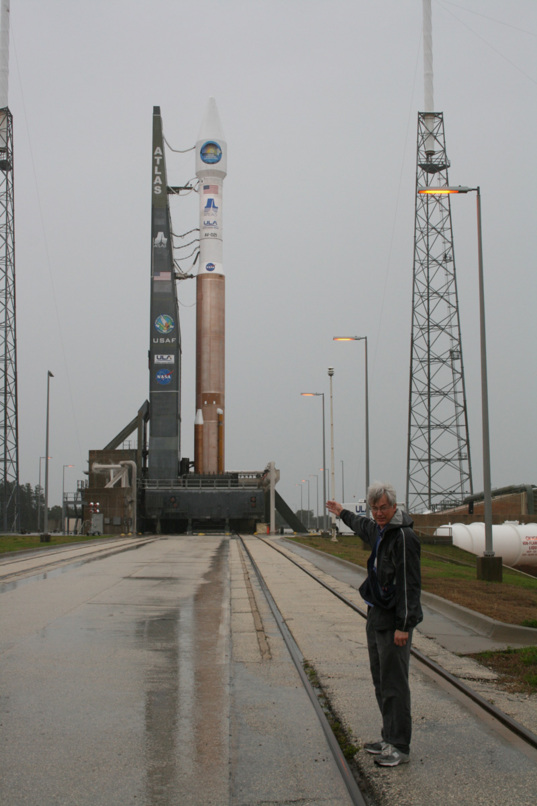 SDO and Atlas V rocket were rolled out to Launch Pad 41 along railroad tracks where I am standing during rainstorm two days before launch.

SDO is a cornerstone science mission that will truly revolutionize our basic understanding of the dynamic behavior of how the Sun functions from its deep interior, how storms propagate to the surface and are then ejected violently outwards towards the entire solar system. The resulting "space weather" impacts every aspect of life here on Earth.

Following liftoff, SDO project scientist Dean Pesnell from NASA Goddard told me at the press site that "SDO will acquire movies of the entire surface of the Sun on a 24/7 basis with 10 times greater resolution than High Definition". The three science instruments (HMI, AIA, and EVE) will collect a staggering 1.5 terabytes of data per day, equivalent to 500,000 song downloads or 380 full length movies per day. "The data will be continuously beamed back to newly built receivers on Earth. We have no onboard recorders since nothing is available to handle such a huge data volume."

"It will take about 3 weeks to circularize SDO's orbit and another month to test the spacecraft and check out the science instruments. We will see first light in about 60 days", Pesnell explained.

Tom Woods, the Principal Investigator for EVE from the University of Colorado at Boulder told me, "I want to thank NASA for this great opportunity. EVE will measure all solar UV wavelengths on a 24/7 basis. It will measure the Sun's heartbeat every 10 seconds. Spectral measurements will provide details of what causes solar storms. NORAD and NOAA will receive the data in real time to allow for better forecasts of space weather".