Here it is. We knew hours ago that Philae separation happened, but there's nothing like seeing a photo, seeing Philae's mothership receding into the distance. 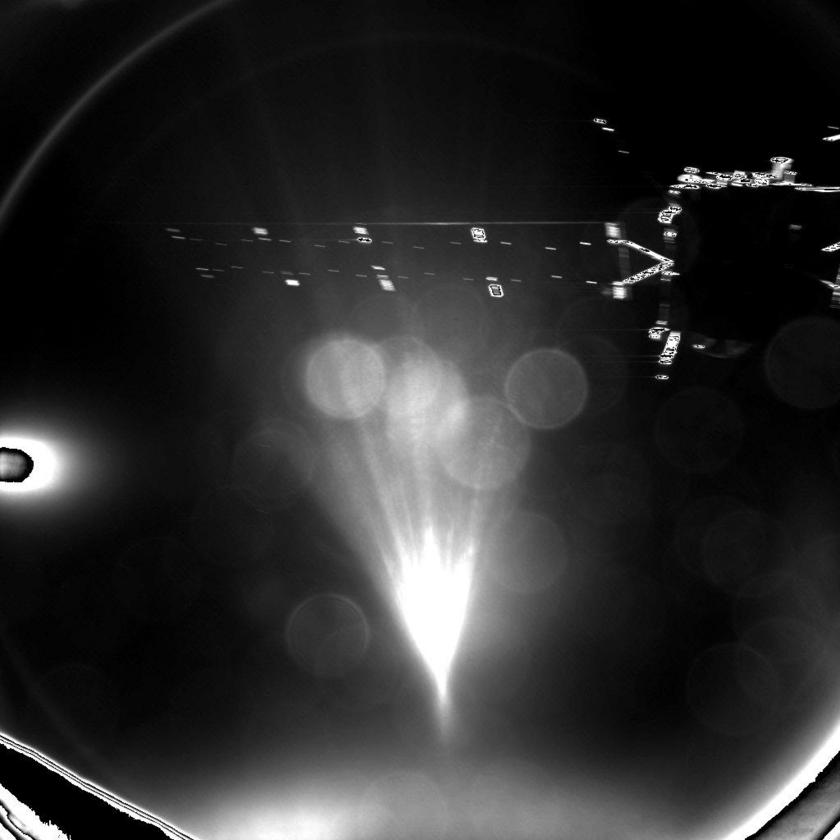 Just after separating from the orbiter, Philae captured a view of its erstwhile companion, documenting its departure.

And this photo is even better: a view from OSIRIS of the lander -- in all its glorious detail.

This amazing photo documents the successful separation of the Philae lander from the Rosetta orbiter. More importantly, it shows that all three lander feet, the ROLIS descent camera boom, and the two CONSERT antennae all deployed successfully.

A lot has had to happen right in order for this image to get down to Earth. Philae separated from the orbiter on schedule at 8:35 spacecraft event time, and we received confirmation that it had happened on Earth right on time at 9:03 UTC, 28 minutes later. Just afterward, Rosetta fired engines to change its path around the comet from a near-collision course to its relay orbit, from which it will be able to monitor Philae while keeping in contact with Earth. As the lander ran through its post-separation timeline, Earth lost contact with Rosetta (as expected), and there was a two-hour window in which there was no news from either spacecraft.

Contact was expected to return at 10:53 UTC. But it didn't happen right away. It took nearly ten minutes, during which the people in mission control appeared increasingly concerned. At length, the signal did arrive, and they confirmed not only that Rosetta was talking to Earth but also that it was relaying telemetry from the lander. Within a few more minutes, we received confirmation that the landing gear had deployed, and several instruments have chimed in on Twitter to announce that they are gathering data.

So there is already science data on the ground from Philae. And no reason to expect that'll stop...at least up until the moment of landing. After that, it's impossible to predict, especially with the possible (though not certain) loss of the cold-gas jet system.

How will we know landing is successful? There are two main signals they are looking for. The first was initially to be the firing of the cold-gas jets, but now we're not sure if that will happen, so the first signal they are looking for is that the two harpoons have fired. That will indicate touchdown. But then we will have to wait several minutes as the harpoons retract and the lander determines that it is in a stable configuration. Only then will the lander team celebrate.

Emily, Will you be posting separate blogs for the rest of the landing, or will you be updating this one with new images and so forth? I would love to see all images you are getting as you get them...will you post them here?

Will Philae be taking images/video as the harpoons fire?

Touchdown and firing of harpoons should have commenced by now....25 more minutes and we should know what happened......I'm turning blue holding my breath. Will it land on hard-crusted surface or a big puddle of cometary fluff? What if its harder than solid Ice where it landed? Will the harpoons bounce back at Philae like a missile?

I too have been wondering along similar lines, considering how rocky the surface of the comet appears. Might the harpoons be harmful to Philae if the rock is too solid, and they are not able to sink into it properly? Scary thought . . .