Help name the last phase of the Cassini mission!

Cassini has had a Prime Mission, an Equinox Mission, and a Solstice Mission. At the end of the Solstice Mission (also known as the Extended-Extended Mission or XXM), Cassini will perform some daring feats. John Spencer described it for us in a guest blog a couple of years ago:

...around Thanksgiving 2016 Cassini will be in an orbit which brings it as close as 3.63 Saturn radii from Saturn's center, between the orbits of Mimas and Enceladus. Then, on November 29, 2016 the spacecraft will use its penultimate Titan flyby to alter its orbit so that Saturn closest approach drops to 2.51 Saturn radii, just 10,000 kilometers beyond the narrow F ring, and not far from the outer edge of the main rings.

Cassini will execute 20 of these close "F-ring" orbits before setting up for a final close Titan flyby on April 22, 2017. This flyby will do something astonishing: it will perturb the orbit so that Saturn closest approach jumps, in a single leap, from just outside the main ring system into the narrow zone of safety between the inner edge of the innermost ring (the D ring) and the planet itself, just 3,800 kilometers above Saturn's cloud tops. Cassini will continue to thread this needle for 23 orbits (called, with some understatement, the "proximal" orbits) until a final distant nudge from Titan on September 11, 2017 delivers the death blow, altering the orbit just enough to drop Cassini into Saturn on September 15. 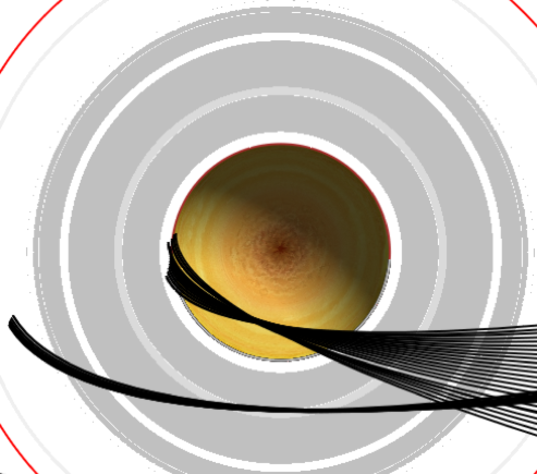 A schematic illustration of Cassini's final Saturn orbits in 2016 and 2017, according to the current XXM plan. The view is from directly above Saturn's north pole, with the main ring system shown in gray, and Cassini's path shown in black. The cluster of orbits crossing the lower part of the figure are the "F-ring" orbits which Cassini will follow from November 2016 to April 2017, and the upper cluster of orbits, passing between the rings and the planet, are the "proximal" orbits that will be followed from April 2017 until Saturn impact in September 2017.

The scientists on the Cassini team are incredibly excited about these two final phases, the F-ring orbits and the proximal orbits. They've told me that each of those two phases is like flying a whole new mission to a new location; each one will give new kinds of science akin to a whole small (Discovery-class) science mission, but with the full Cassini science payload. It's going to be totally awesome.

The name "proximal orbits" is a Vulcan-sounding phrase, all logic and science. But getting this science is going to take navigational bravery of which Captain Kirk would be proud. To help the public understand just how cool this part of the mission is going to be, the Cassini team is asking the public to learn about Cassini's final phase and then weigh in on a name for the final phase that has more punch to it. You can either cast a vote for one of the team's suggestions, or write in your own.

Here are the suggested names on the website as of today. Can you do better? Submit your suggestion!

How about, "Can't Touch This" for a name.? I think NASA deserves a little braggadocio.

How about "Trans-ringular Obit" That's fun to say.

I submitted the name The Kamikaze Ring-Splat! I also made very brief justification for why "As the Cassini mission is coming to a close, it will end it in a dive into history as one of the most successful and fascinating missions that mankind has ever embarked. Diving into Saturn's majestic ring's then destroying itself by hitting Saturn's thick atmosphere...SPLAT!"

My husband was part of the original Cassini team that designed and built Cassini-'Go with the solar wind on your final voyage and capture the stars and fires of the Universe on your sojourn into Infinity.'-AZ

I'd opt for The Cassini Coda, referring to the various connotations of a "coda" as something that serves as the ending part of a composition, forms an addition to the basic structure and rounds the entire piece out, yet generates its own interest and excitement.

How about Emily? She needs more love, as do we all.

My proposal: The "Clash Trajectory"

Gladiator seems like a good name. Can't you just hear the music at the end of the Gladiator movie as Cassini makes contact with Saturn's cloud tops.

Lagniappe. A Louisiana French word meaning 'something extra for free'.

How about "Cloud Skimmers"