Answers to Frequently Asked Questions about MAVEN's launch and mission

MAVEN is just about to launch! The spacecraft is atop the rocket on the launch pad at Kennedy Space Center, Florida, and liftoff is currently scheduled for Monday, November 18, at 1:28 p.m. local time (10:28 PT / 18:28 UT). On Wednesday, the mission released their launch press kit. I've said it before and I'll say it again: before you ask anybody any questions about any NASA mission, look for the press kit. Odds are good your question is answered inside, in language you can understand. But in case you don't have time for that, this post paraphrases and summarizes the press kit's high points, and hopefully answers most of your questions.

What kind of rocket is it? It's an Atlas V-401. The "401" bit tells you the following: it's a 4-meter nosecone (the other common option is a 5-meter one). There are no extra solid rocket boosters strapped on to the sides. And there's one upper rocket stage, a Centaur. For comparison, Curiosity launched on an Atlas V-541 (5-meter fairing, 4 strap-on boosters, and a partridge in a pear tree, I mean a Centaur). 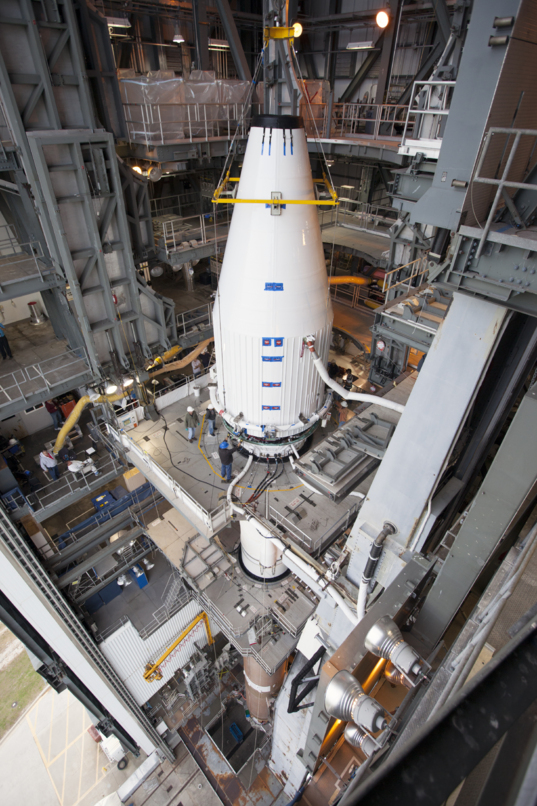 What's the launch timeline? If all goes well, the spacecraft will be on its own and on the way to Mars within an hour after launch. All times are Pacific/UT. Each launch day has a two-hour launch window, so these times may need to be adjusted if the spacecraft doesn't launch right when the window opens.

What happens if they don't launch on Monday? The launch period lasts 20 days, and could even be extended out to December 23 if necessary.

For more specifics about the timeline of events on launch day, it's worth checking out the United Launch Alliance website and booklet on the MAVEN launch.

Questions about the spacecraft

What are its basic dimensions? Its body is a squat square box, 2.29 meters square and 1.5 meters high. The high-gain antenna is 2 meters in diameter (think about that; it's big). Its solar panels span a total of 11.43 meters and are in a "gull-wing" shape. When the spacecraft is all packed up for launch, with the solar panels folded, it's 3.47 meters high. Four instrument booms will extend outward from the bus: one for the SWEA instrument (1.65 meters long), one for the articulated payload platform (2.3 meters long), and two for the LPW instrument (7 meters long).

The launch mass is 2,454 kilograms, of which 1,645 kg is fuel and only 809 is spacecraft. Of that, the instrument package weighs in at 65 kilograms, and there's an additional 6.5 kilograms devoted to the Electra instrument that allows relay from rovers and landers to Earth. 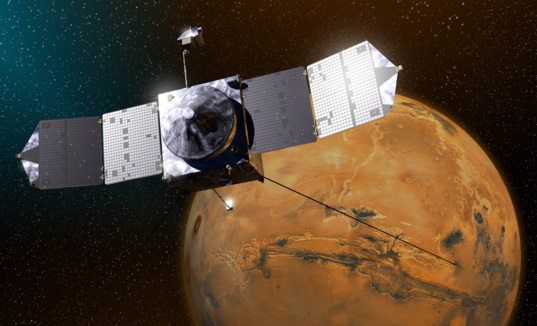 Artist concept of MAVEN at Mars

Questions about the science

What is MAVEN's mission? The main questions MAVEN is seeking to answer is: how did Mars lose its early atmosphere, and how does atmospheric loss continue today? To do that, "MAVEN will study the boundary between the planet’s current atmosphere and outer space, measuring solar energy inputs to the atmosphere, the composition of the upper atmosphere, and the current rates of loss of atmospheric gas to space. Information about these escaping gases’ chemical, atomic and energetic character will inform scientists about the processes at work." The mission has three stated objectives:

The mission is led by Principal Investigator Bruce Jakosky. 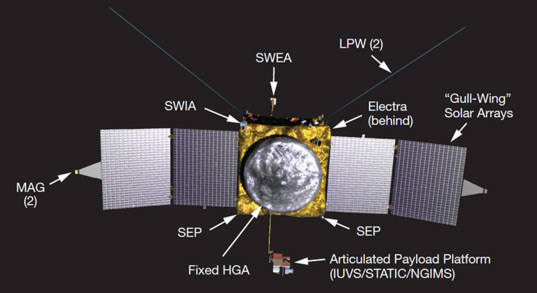 What science instruments are on MAVEN? There are eight instruments. Six of them are integrated into a "Particles and Fields package":

Two more instrument packages are on the articulated payload platform, which continuously rotates as MAVEN orbits in order to keep the instruments pointed correctly at all times -- except for a five-hour period twice each week when the spacecraft turns to Earth to relay data through its high-gain antenna.

The Remote Sensing package contains one instrument, the Imaging UltraViolet Spectrograph (IUVS). It will study Mars' atmospheric composition from afar, looking across the limb while close to Mars and imaging the whole disk when far from Mars. It will also observe the occultation of stars by the atmosphere to measure carbon dioxide abundance. Many missions have flown similar instruments, including UVIS on Cassini at Saturn. IUVS is co-led by Nick Schneider and Bill McClintock.

The Neutral Gas and Ion Mass Spectrometer (NGIMS) is also its own instrument package. It will measure the composition of neutral gases and ions in the upper atmosphere, including helium, nitrogen, oxygen, carbon monoxide, argon, and carbon dioxide. It will also measure the isotopic ratios for carbon, nitogen, oxygen, and argon. NGIMS will be able to gather data at altitudes of 125 to 400 kilometers. MAVEN will spend 12 minutes at those altitudes on each orbit. NGIMS is led by Paul Mahaffy, who also leads the mass spectrometer instrument on Curiosity (SAM).

Isn't there a camera? No.

What can MAVEN tell us about methane on Mars? None of MAVEN's instruments can measure methane in Mars' atmosphere. That's up to India's Mars Orbiter Mission and ESA's future ExoMars Trace Gas Orbiter.

If your curiosity about MAVEN still isn't satisfied, read the rest of the launch press kit for yourself!

@Emily Have you heard anything new about Juno from mr. Nybakken? There most definitely is some anomalous acceleration towards Sun. Also, how long it can take to release Juno's Earth flyby results?

How is MAVEN different from India's Mangalyan, launched recently? You say that, If all goes well, the spacecraft will be on its own and on the way to Mars within an hour after launch. Why the Mangalyan takes almost 4 weeks to go on course to Mars?

@Pratap: MAVEN is launching on a much more powerful rocket, the Atlas V, which can send it directly to Mars. Mangalyan's rocket didn't have that capability and had to slowly work up its velocity.

Why the NASA investigates Mars better than to Europe or Titan, etc? Mars is very interesting but in my opinion there are should be a balance. Titan and Europe, deserve to be studied deeply too. The budget can not be a reason. Example: for investigate Pluto, the mission needs be a New Fontiers (NH mission), and needed a Flagship mission for research Mars (MSL mission). I acknowledge that the Mars launch windows has much more accessible, and that it requires a maneuver, while reaching the outer system to do 2 or 3 G assists, but worth it!

But anyway, I´m happy for the start of the new martian odyssey!

Agost: That's a very delicate issue. The Scientific community makes recommendations of top priority missions for 2013 - 2023 via a report called the Decadal Survey. The top recommendation was a Mars Sample Return mission followed by a Europa scouting mission. On a practical matter, Mars is close, so we can get to it relatively quickly, which saves lots of money. Building mission after mission allows a real program of systematic exploration at a reasonable rate, something much harder with missions to the outer planets.

Wishing the MAVEN team the best of luck.Will there be any cross communication between Mars Orbiter Mission and MAVEN during the long 300 day trip for say calibration and information relay ?

Prasanna, there probably won't be any direct communication between the two spacecraft, but they will be obtaining data sets that will complement each other. The MAVEN mission, like all NASA missions, will publish its data within a relatively short time (usually 6-12 months) of its acquisition, so the Mars Orbiter Mission team will be able to use it also. I would love to see India make an agreement with NASA to share its data to the Planetary Data System in the same format, which would make it accessible to all.

Emily, the loss of Mars' atmosphere is certainly an interesting topic. However I heard in the last couple months I am not sure from where that one of the existing spacecraft determined there is enough water ice on Mars that that can explain where the liquid water went without resorting to atmospheric loss. What do you think of this and do you think the Maven spacecraft will be able to better confirm and disprove that idea and if so how?

I have a very basic doubt. As per ISRO the MOM will do the Mars orbit insertion on Sep 24, 2014 and as per NASA, MAVEN will do the orbit insertion around September 22, 2014. Despite the fact that MAVEN is launched on powerful rocket Atlas V and is being directly launched to Mars, why is both MOM and MAVEN are taking almost similar time period to reach Mars orbit.

Also, if MAVEN is delayed by 2 days for doing the Mars orbit insertion, then both MOM and MAVEN will do the orbit insertion almost at the same day. In such case is there a possibility that, both of them may come very close to each other or how much proximity would be there between these two after orbit insertion

Deoy: the amount of time it takes to get to mars, the timing of the launch windows, and the speed at which you escape earth is determined by a particular orbit connecting the two planets. Trying to get to mars faster than this, or at a different time, is very inefficient in terms of fuel. The larger rocket of MAVEN allows the probe to be bigger, and the larger engine on the second stage allows it to reach the escape velocity in a single burn instead of many split between different orbits, but in the end they will be going very similar speeds. They will not be close during orbit insertion, because at those speeds even hours apart is a lot of distance. Additionally, MOM's orbit is higher and more elliptical. If their elliptical orbits are pointed similar directions, they will never come very close to each other.

Thanks a lot Ethan