I have a few updates about science from Curiosity shared at last week's Division for Planetary Sciences Meeting, but I have to get something else out of the way first. Every day, I get a question from somebody about whether Curiosity has been shut down. It hasn't, and here's the thing: you can determine that for yourself, by checking a public website. Four of the planetary missions operated out of the Jet Propulsion Laboratory, including Curiosity, Opportunity, Cassini, and (via Malin Space Science Systems) Juno, are putting images from the spacecraft online as soon as they are received on Earth. Even though NASA websites are shut down, and news stories aren't being posted to JPL websites, the raw image data pipeline is automatic and continues. Check in with these missions through their images and you can see that they are still actively exploring.

Take Curiosity. Although there's an official website for the raw images, I like amateur Mike Howard's midnightplanets.com much better. Go there, click on Curiosity (MSL), and you'll get a list of the images most recently returned from Curiosity. I started writing this blog entry on Sunday afternoon, and there were sets of images that had arrived just minutes prior. What's especially cool is if the "Posted sol" number matches the sol number of the images, as it does in the screen cap below. That means that the images that just arrived were taken today on Mars and are already on your very own computer. Yes, Curiosity is still operating. 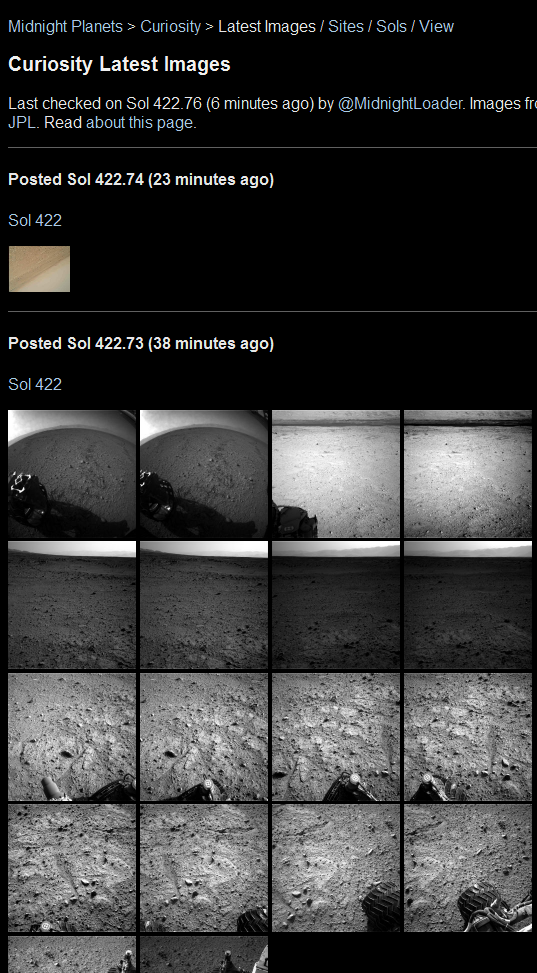 On midnightplanets you can tell at a glance when the rover has been driving. Large sets of teeny thumbnail images like these are taken by the rover's Navcams (the navigational cameras up on her mast) and Hazcams (the fish-eye cameras mounted to the front and rear of the rover) while Curiosity is driving. They are originally taken at full resolution on Mars and used for autonomous navigation; by the rover. Only the thumbnails are downloaded to Earth, unless there is a problem. Here's a fun trick -- click on the first thumbnail and the last thumbnail in the series and note the time of day that Curiosity took them. That tells you how long the drive took. 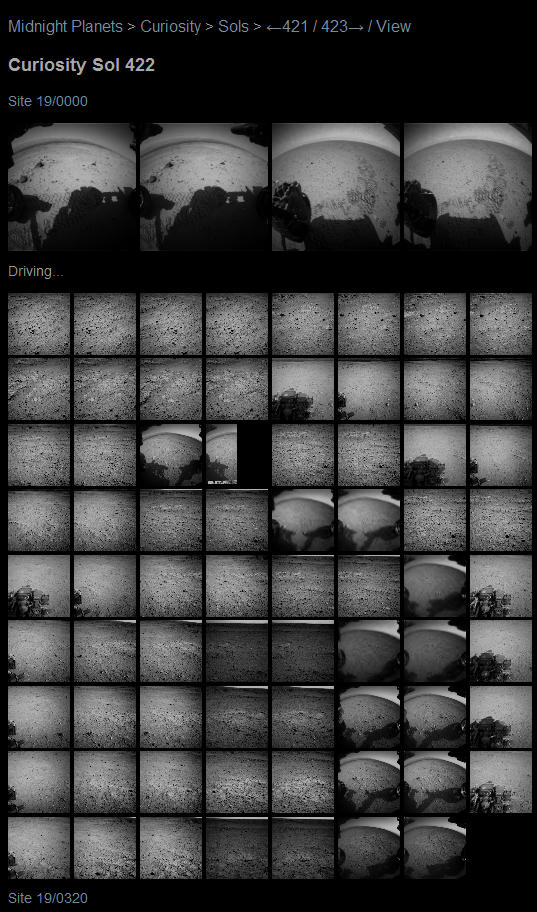 How far did she drive? A first-order approximation Curiosity achieves roughly 50 meters per drive hour, a little more on shorter drives. We can actually learn more specifically than that, though, with a little patience. The Jet Propulsion Laboratory provides navigation information for all its spacecraft in the form of something called SPICE kernels; these are updated daily-ish. Another amateur, Joe Knapp, has built curiositylog.com to convert that esoteric data into something readable. It's now Tuesday as I continue writing this post (funny how time works!) and the sol 422 drive documented in the screen cap that I posted above clocked in at 70 meters in 70 minutes of driving. You can even get an automatically generated map of the drive. Here is a quick-and-dirty mosaic of some of the color Mastcam images that Curiosity took at the end of the drive. Examine the terrain ahead carefully and you'll see it's looking a little more rugged than previously.

So: No, Curiosity has not been shut down. I did call JPL's public information office yesterday morning to chat briefly with Veronica McGregor about the status of JPL's planetary missions, and she said that they're all okay for funding for at least another week. Hopefully this infernal shutdown will be over by then.

Curiosity is now in restricted sols. That's where the rover can drive at most every other sol, because images from each sol's drive reach Earth too late the next Earth day for planners to understand the rover's position well enough to plan another drive that day. And since they don't work over weekends, that means three drive sols per week: one they plan on Monday, one they plan on Wednesday, and one they plan on Friday. The stuff they plan on Tuesdays and Thursdays has to work with only approximate information about the rover's ultimate position, so it's "untargeted" work, like blind-pointed imaging or panoramic imaging or processing of samples already onboard the rover.

Right now they are driving, driving, driving. I'll have an update about Curiosity science and operations from the DPS meeting shortly -- I decided to split it into a separate post. Stay tuned for that.

EDIT: I miscredited curiositylog.com in an earlier version of this post. Apologies to Joe Knapp!

Are you shure with curiositylog.com? I thought, it has been Joe Knapp's work.

Aaah, you're right! My apologies to Joe. I've edited the post.