Just yesterday I wrote about a mission preparing for launch to Mars; but before MAVEN even gets to the launch pad, we'll be seeing a launch toward the Moon. LADEE's launch window opens two weeks from today, on September 6. The brief little mission aims to study the lunar atmosphere and dust environment before future spacecraft landings disturb its currently pristine state. LADEE carries three science instruments: a dust sensor (with heritage from Cassini's CAPS instrument), an ultraviolet spectrometer (almost identical to the one that LCROSS carried to the Moon), and a neutral mass spectrometer (based on part of Curiosity's SAM instrument). Every spacecraft is different; yet they're based on every other spacecraft that's ever flown, not just to the Moon, but also to Saturn and Mars!

The other unusual thing about the launch is that it's happening from NASA Wallops Flight Facility, which is on Wallops Island, in Virginia. This is within spitting distance of Washington, D.C., and since it's a midnight launch (it's scheduled for 11:27 p.m. local time), it will be visible, at least theoretically, to a substantial portion of the U.S. population, weather permitting (and assuming people bother to go outside to try to spot it, which you should really do, because how often is this going to happen?). Here's a map: 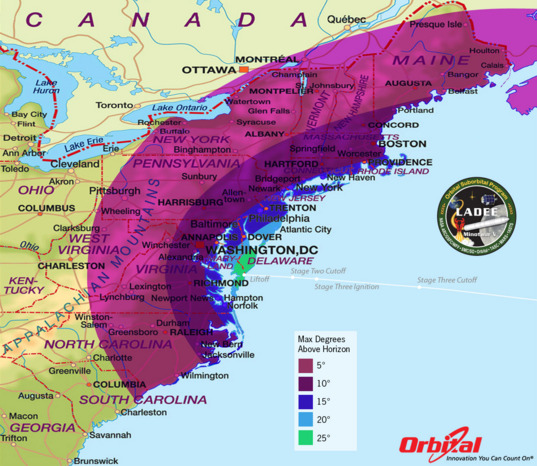 This map shows the maximum elevation (degrees above the horizon) that the Minotaur V rocket will reach depending on your location along the east coast. The further away you are from the launch site, the closer to the horizon the rocket will be. As a reference, when you look at your fist with your arm fully outstretched, it spans approximately 10 degrees. Thus if you are in Washington, DC the highest point the Minotaur V will reach is approximately 13 degrees above the horizon, or just slightly more than a fist's width. The contours shown stop below 5 degrees. It is unlikely that you'll be able to view the rocket when it is below 5 degrees due to buildings, vegetation, and other terrain features.

For more maps and some really neat simulations of how the launch will appear from various landmarks, visit the Orbital Sciences Corporation's Minotaur V website. (Orbital converted the missile to its peacetime use.)

Here's a recent photo showing the rocket being stacked. 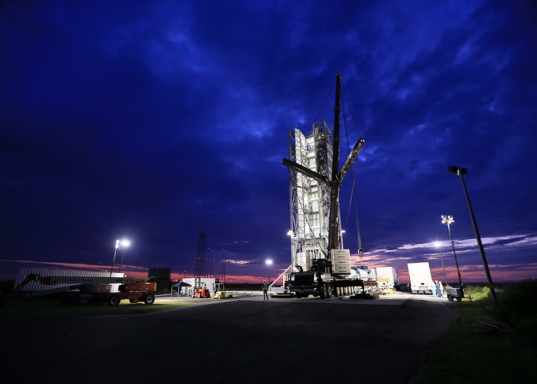 Engineers at Wallops Flight Facility in Virginia prepare to stack the Minotaur V rocket for the launch of NASA's Lunar Atmosphere and Dust Environment Explorer (LADEE) mission from the Mid-Atlantic Regional Spaceport.

And here is a really cool new artist's concept of the mission that shows sunlight scattering through dust just above the lunar surface -- which is, of course, what LADEE is going to the Moon to study. 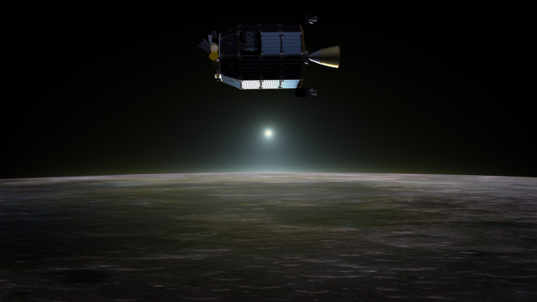 LADEE's mission to the Moon will be very brief, unfortunately. In order to measure lunar dust and atmosphere, you have to be very, very close to the surface. But the lunar gravity field is extremely lumpy, which means that it takes a lot of fuel to stay in orbit. LADEE will take a month to get to the Moon, and a month to commission its science instruments in an initial orbit. It will also test out new laser communication technology during the commissioning phase. Then it'll head downward to a low science orbit, and survive about four months before being intentionally crashed into the lunar surface.

"because how often is this going to happen?" Maybe a lot. Orbital plans to fly space station resupply missions from Wallops. By the way, when I had to drive from DC to Wallops, it sure didn't seem like spitting distance.

"Please don't let it blow up. " This launch vehicle is very reliable, i don't see reasons for worry, unless you know something we don't ? 4th and 5th stage are new, which means higher risk at that part of flight, but still no reason to worry more than about any other launch. All Minotaur IV launches were successful and there i see no reason for this one not to be. I also don't remember any launch failure with American launcher in quite a while and see no reason for change with this launch. http://en.wikipedia.org/wiki/2013_in_spaceflight http://en.wikipedia.org/wiki/2012_in_spaceflight

Minotaur has a 100% success rate with all of their vehicles. The 4th stage on the LADEE stack has flown, as has entire stack below it, in 2011 with the Tacsat-IV mission. The fifth stage itself is new, but the stage is built around an ATK Star 37FM motor, which has flown many times before (including as the upper stage on the Lunar Prospector mission in 1997). Lots of things can go wrong with a launch, but the solid motors on all of the LADEE stages have flown many times before with a whole lot of success. Go LADEE! Go Minotaur!