Woohoo! The LEGO Curiosity rover is going to be a kit!

Via Collectspace I learned yesterday that the LEGO Curiosity rover is going to go into production! I wrote about this model last September; its designer, Stephen Pakbaz, gave me a kit to build it. (Pakbaz sourced the parts for several kits and gave them out to people who said they'd use them for educational purposes.) I have certainly used it; I find it especially valuable as a tool for understanding how the rocker-bogie suspension system works. 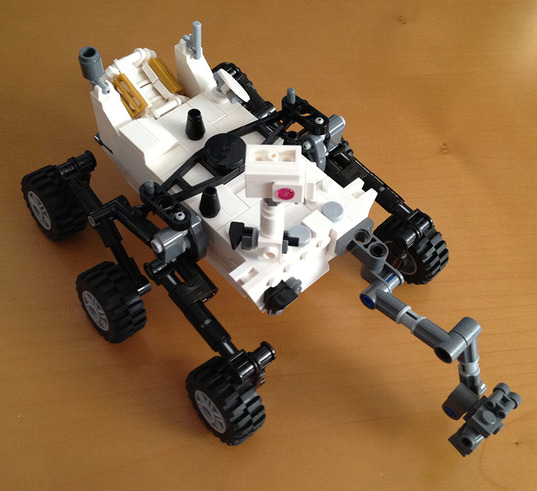 This rover will be available as a LEGO set because of CUUSOO. CUUSOO is a website where LEGO modelers can share concepts for kits. The CUUSOO community can vote to support concepts, and if the concept receives 10,000 votes, it goes to a LEGO committee. You have to register on the site and provide some personal information in order to vote, because while it's a fan-supported site, it is also (and just as importantly) a market research site, used by LEGO to determine which models have the support required to sell as a viable product. Each quarter, the committee reviews the supported concepts, and may choose one to actually bring to market as an official LEGO kit. The Curiosity rover achieved its required votes right after Curiosity landed. And LEGO CUUSOO announced on Friday that it had been selected as the fifth LEGO CUUSOO kit. Here's what they had to say about it:

After analyzing the Mars Science Laboratory Curiosity Rover project, we learned that this product has niche appeal and strong demand from the space and education communities. The product aligns well with the LEGO Group’s mission to “inspire and develop the builders of tomorrow,” including those who will build our future in outer space.

Like the Back to the Future Time Machine, which was approved in the Summer Review, the model presented in this project is built very closely to the LEGO Group’s design standards and so the final product will be very close to Perijove’s original design. It has a high play value, it fits well with voters’ price expectations, and we’ve secured the rights from NASA to release this project as the next LEGO CUUSOO set.

For these reasons, the Mars Science Laboratory Curiosity Rover project has passed the LEGO Review, and has been selected for production as the next LEGO CUUSOO set. Pricing and availability are still being determined.

Woohoo! I wonder if they'll be available in time for Christmas....

Being a science educator myself, do you think Mr. Pakbaz would allow me to build a kit for educational purposes?

There's no problem with you building one -- he's posted instructions for his rover (as well as the descent stage) on his site. But he only bought parts for about seven sets -- at his own considerable expense -- and he distributed those already. You can get the parts yourself from sites such as bricklink. It's not cheap though -- I'd recommend waiting for the CUUSOO kit to go into production, as that'll be a much cheaper way to get a hold of one.