Successful launch for NuSTAR on a Pegasus XL

NuSTAR, the most sensitive X-ray telescope ever developed, launched successfully at 16:00 UT. This was a fun launch to watch, because the launch vehicle was a Pegasus XL air-launched rocket, dropped like a bomb from open bay doors of an L-1011 airplane. Jason Major caught the few seconds of launch video on YouTube. The rocket drops, then, a few seconds later, the screen goes orange as the first stage ignites.

Everything about the launch was "nominal" -- that word being the highest of all possible praise from a rocketeer. Once the third stage placed NuSTAR in its 630-kilometer-altitude orbit, the spacecraft established communication with Earth and then opened its five solar panels. Deployment of the 10-meter-long mast that separates the telescope and the X-ray detectors will happen next week. Read more about the mission here. 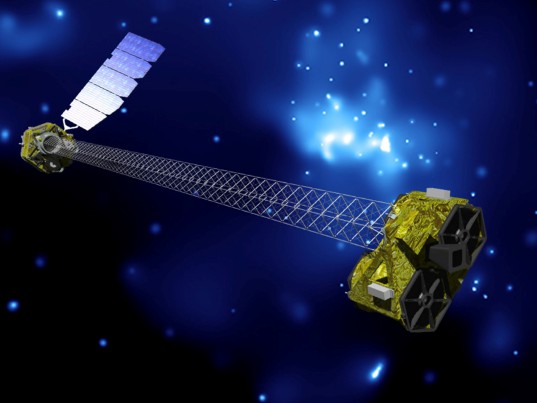 The NuSTAR spacecraft in its final configuration. Incoming X-rays enter the optics package in the foreground, and are reflected 10 meters to the detectors at the rear of the spacecraft. The mast connecting the two sections of the spacecraft is collapsible, and will not deploy until NuSTAR is in orbit.