It's now the early hours of sol 44, and JPL held a phone briefing today with the latest news from Curiosity. Before I hit the high points, I learned a new word today: "solorrow." When you're living on Mars time, it's confusing to use "tomorrow" to mean "the next sol on Mars" when that sol starts at some time totally unrelated to the time at which today becomes tomorrow on Earth. So if you're talking about Earth days, it's yesterday, today, and tomorrow; if you're talking about Mars sols, it's yestersol, tosol, and solorrow.

OK, here's the summary of the last and next few sols:

I've updated my sol-by-sol summary with these notes. 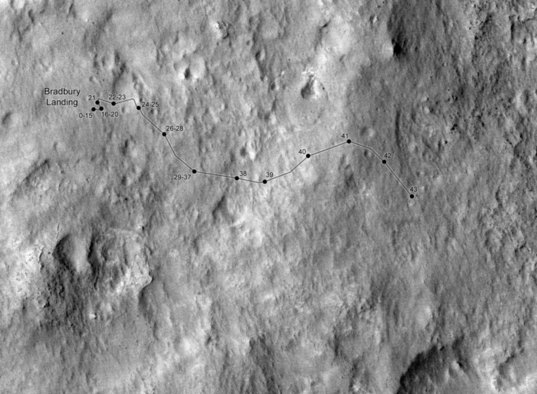 You can actually see the rock "Jake Matijevic" in the HiRISE image if you click to enlarge; it is just to the right of the label for the sol 43 drive.

I have no problem with JPL taking their time; they know what they are doing. Emily L. warned us that results will be slow in coming so I am OK with this, but still... I think that the most interesting development that I am waiting for is the SAM TLS methane results. JPL scientists promised us something this week, but then at the press conference they said it would be another week at least. As I see it, there are two Big Questions: Was any methane detected and what was the carbon isotope ratio of the methane if detected. Gale is not near a known methane plume so you have to wonder....I seem to remember that during the first run the results were skewed because of contamination; hopefully that problem is under control. As you know, the ratio of carbon 12 to 13 is a good clue to the origins of organic chemicals since life (at least Earth life) preferentially uses carbon-12.

How does Curiosity's "meters per marshour" compare with Spririt/Opportunity. i.e. How much faster does it go? It took S/O quite a while to get that far, no?

As far as the drive speed, they are still being cautious until they can confirm that all their hazard avoidance software works correctly. Even then I doubt MSL will go faster than Opportunity which is fine.

One last thought on the SAM tunable laser spectrometer (TLS); it is so sensitive that I have wonder if methane vaporizes off plastic parts in the rover and is picked up by TLS. I wish they would at least tell us if ANY methane has been detected...

@kerbenbenker I've heard over and over again from people in the mission that Curiosity is exponentially more complicated than Spirit or Opportunity. They're playing it very, very safe. They feel they have more time to spare, too, since the nominal mission is a full martian year (~668 sols) vs. 90 sols for MER.

Perhaps overdoing playing safe.They where carefull with other rovers too.