What's up in the solar system in January 2012, and the rest of the year

There will be no planetary launches in 2012, but there is still plenty of deep-space activity to look forward to over the coming year. I count 24 spacecraft currently exploring or en route to points across the solar system. The year will start with the twin GRAILs arriving at the Moon this weekend. This happy event will be followed, in about two weeks, by the disappointing end of the Phobos-Grunt mission as it reenters Earth's atmosphere.

There are happier things to look forward to in the spring. Cassini will fly within 75 kilometers of Enceladus three (count them, three!) times in March, April, and May, and will then shift its orbit so that, for first time since 2010, it will be looking up at Saturn's open rings again. For a few weeks in May and June, the biggest action will be in the sky above our heads. There's an annular solar eclipse on May 20-21; a partial lunar eclipse on June 4; and a very rare transit of Venus across the Sun on June 5 and 6. (Maybe it's time for me to buy a solar telescope....) In July, Dawn will complete its mission to Vesta and embark on its long cruise to Ceres. Then, on August 6, comes the initially terrifying, then, I hope, triumphant landing day of the Mars rover Curiosity.

Meanwhile, 12 spacecraft will carry on with their work of returning science data from points across the solar system: MESSENGER at Mercury; Venus Express from Venus; Lunar Reconnaissance Orbiter, the twin ARTEMIS craft, and Chang'E 2 from the Moon; Odyssey, Mars Express, Mars Reconnaissance Orbiter, and Opportunity at Mars; and the two Voyagers at the distant edges of the solar system. Another seven spacecraft are quietly cruising to future science: Juno, Rosetta, New Horizons, Akatsuki, and IKAROS. Venerable spacecraft ICE and Deep Impact are awaiting further instructions. And I'm not even counting the Sun-observing missions, of which there are nearly as many as there are planetary ones.

There are lots of changes to Olaf Frohn's diagram of spacecraft in the solar system since last month's: 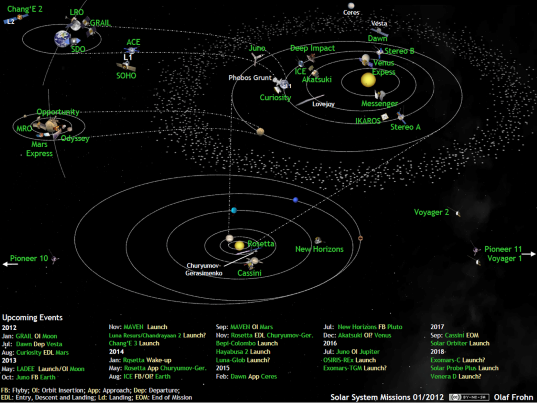 NASA's MESSENGER Mercury orbiter will complete its primary mission on March 18, but has won a one-year extension. The team presented 63 papers at the American Geophysical Union meeting last month, and the two oral sessions may be viewed online. Watch their gallery for regular image releases..

The twin spacecraft of NASA's GRAIL mission will arrive on December 31, 2011, and January 1, 2012. In March they'll begin mapping the lunar gravity field from an altitude of 50 kilometers. After the lunar eclipse in June, the spacecraft will trade places and produce a second map from an altitude of only 25 kilometers. The mission will end in December, and the spacecraft will crash into the Moon.!

I haven't previously been including NASA's ARTEMIS mission in these updates mainly because there's little information available on their status. But that's no different from several of the other missions in my roundup (notably Venus Express and ICE), and many of you have asked me to include them, so I'm finally including them. ARTEMIS-P1 and -P2 are two of the five spacecraft that once formed the THEMIS heliophysics mission. They were sent into lunar orbit in 2011 to study the Moon's magnetic field, and should last for at least seven years.

NASA's NASA's Lunar Reconnaissance Orbiter is busily mapping the Moon from its science orbit. Last month, they issued their eighth (already?!?) release of data to the Planetary Data System, a release that included more than 80,000 images. Many of these are from Lunar Reconnaissance Orbiter's "low-orbit month" last August, when its circular orbit was temporarily shifted to an elliptical one with a 22-kilometer periapsis over the nearside in order to better document the Apollo landing sites. For instance, check out this amazing view of Shorty crater on the Moon, once visited by the Apollo 17 mission.

Out at Mars, it's mid-autumn in the southern hemisphere. (It's currently Ls 50.0.) Opportunity sol 2819 is drawing to a close, and the rover has had a light December with a few short drives, some work with its arm, and a self-portrait. Opportunity has to be cautious with power and maintain a 16-degree northward tilt to its panels through the Martian winter. At last report, the rover was only producing 300 watt-hours from its solar panels, a pretty low number. The solstice is not for three months, so the first half of 2012 will probably be pretty quiet for Opportunity. Here is Eduardo Tesheiner's latest route map and Google Earth kml file for Opportunity (two months old now).

ESA's Mars Express is carrying on with an extended mission, planned to run through 2014. In 2011, a serious problem developed with a solid-state memory device that caused it to enter safe mode repeatedly in August and September. The Mars Express Blog is chronicling the mission's work to implement a new method of commanding the spacecraft in order to recover most of its scientific capability. The work has been progressing very well. In particular, a crucially important series of MARSIS observations of the north pole was successfully completed last month. Unfortunately for the public, the anomaly has precluded the use of the Mars Webcam lately.

NASA's Mars Reconnaissance Orbiter is keeping an eye on Mars' weather with MARCI; their latest report is of "tumultuous" weather across Mars, where "dust storm activity once again picked up with full force." Somehow, Opportunity doesn't see much of this action, and had only "partially cloudy skies." As always, check in on the latest captioned image releases from HiRISE for your dose of spectacular photos. Here's one that reveals new gullies on dark sand dunes.

NASA's Mars Odyssey is now the longest-lived spacecraft ever to operate at Mars. You can see the latest from its THEMIS instrument here. I am always a sucker for images from Mars' outflow valleys, like this one showing part of Kasei Vallis. The valles speak of amazingly violent events that seem like they happened yesterday; but zoom in on them and you see impact craters and sand dunes everywhere, which tell you how very, very long ago the outflows happened.

NASA's Dawn spacecraft is now in Low Altitude Mapping Orbit, averaging 210 kilometers' elevation. According to the recent Mission Status Reports, the spacecraft is now in a fairly repetitive phase of the mission, gathering neutron data, doing routine radio tracking, and performing hih-resolution imaging. The most recent images of the day have been a nice series showing photos and topography of named craters, but they took a break on December 13 and will resume daily image releases on January 8. Here's a timeline summarizing the Vesta phase of the Dawn mission. Once the Low-Altitude Mapping Orbit phase is complete, Dawn will raise its orbit to a second High-Altitude Mapping Orbit phase. By next summer, Dawn will be able to see the north polar areas of Vesta that were in winter darkness during the previous mapping cycle. And in July, Dawn will depart Vesta for Ceres, which it will reach in early 2015..

The NASA-ESA-ASI Cassini spacecraft has recently begin its Rev 159. For all of 2011, Cassini has been orbiting in Saturn's equatorial plane, which has permitted numerous encounters with Saturn's mid-sized icy moons. That continues as 2012 opens; three targeted flybys of Titan in January and February will set up three consecutive super-ultra-close targeted flybys of Enceladus at altitudes of about 75 kilometers in March, April, and May. Then, on May 22, a targeted flyby of Titan will kick Cassini into an inclined orbit. Through the rest of 2012 and all of 2013, it'll spend most of its time over the southern, unlit face of Saturn's rings. No further targeted flybys of mid-sized moons are planned for 2012, but there will be five more flybys of Titan. To see what Cassini's doing when, check out my long and detailed page on Cassini's tour of the Saturn sytem, and look to the Looking Ahead page for more detailed information.

NASA's New Horizons has 10.35 AU to go to reach Pluto. There are 1292 days left until Pluto closest approach. It's on course for a January to July 2015 encounter with the Pluto and Charon system. In the meantime, the search continues for New Horizons' future Kuiper belt target(s); go to icehunters.org to help them with their search!

Juno spacecraft is outbound from the Sun. Informal status updates get posted to its Twitter feed. Last month it passed Mars' orbital distance from the Sun; it'll go well beyond Mars' orbit before it heads sunward again. An Earth flyby in August 2013 will send it on to a July 2016 Jupiter arrival.

This month will probably be the last for Phobos-Grunt, as its orbit is decaying and recovery efforts have ended. Current estimates put its reentry on about January 16, but that date will likely shift. Follow @PhG_Reentry on Twitter for the latest news. If Phobos-Grunt's reentry is observed (which is a big "if"), it's distinctly possible that our Phobos LIFE experiment would survive the fall, encased inside the Phobos sample return capsule.

NASA's Curiosity, or Mars Science Laboratory rover, is now 152 million kilometers from Mars. Curiosity will be landing in Gale crater on August 6, 2012, just after 5:00 UTC (August 5, after 10:00 p.m. here in Los Angeles). On Mars, it will be in the midafternoon of a late winter day in the southern hemisphere at the landing site at 4.49°S, 137.42°E. Its nominal mission will last one year but it should go on much longer.

JAXA's IKAROS flew past Venus in December and has been operating successfully since May 21, 2010. According tot he IKAROS blog it was last heard from on December 24; a December 29 communication attempt did not succeed. It is getting much harder for Earth to pick up its faint signals, and will soon run out of maneuvering fuel.