What's up in the solar system in December 2011

What's going on with our planetary explorers in December? As 2011 closes and 2012 begins, the twin GRAIL spacecraft will enter orbit at the Moon, and will also be receiving new names, to be selected from hundreds of contest entries. There's a total lunar eclipse to look forward to on December 10, and targeted flybys of Dione and Titan by Cassini on December 12 and 13. Also, expect quite a few planetary science stories to be appearing in the media next week, timed to coordinate with the huge American Geophysical Union fall meeting in San Francisco from December 5 to 9. I'll be there for the first two days of it!

Another milestone to note: the recent spate of planetary launches is now over. The year 2011 saw four launches of six spacecraft: GRAIL's twins to the Moon, Juno to Jupiter, and Phobos-Grunt, Yinghuo-1, and Curiosity aimed for Mars. With those behind us, the "preparing for launch" section of this monthly post is going away for more than a year. There will be no planetary launches at all in 2012; the next NASA launches will be LADEE to the Moon in May 2013 and MAVEN toward Mars in November 2013. Both are under construction, but I won't write further updates about either in the "What's Up" column until they've shipped to their launch sites.

There are lots of changes to Olaf Frohn's diagram of spacecraft in the solar system since last month's: 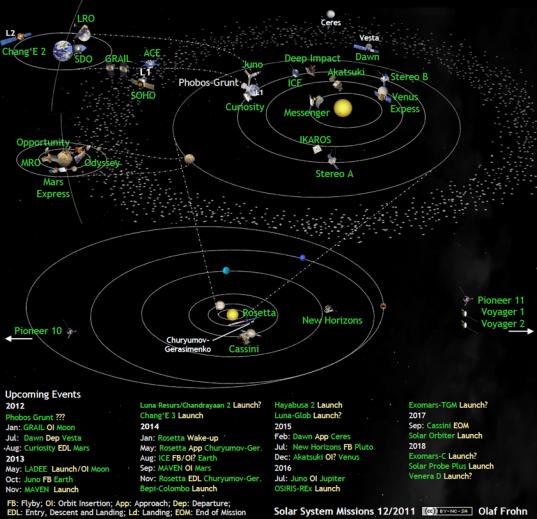 NASA's MESSENGER team got some excellent news last month: NASA elected to fund a mission extension. Its nominal mission lasts through March 18, 2012; the extension will cover one more Earth year, about four more Mercury years, of observations. MESSENGER is not a mission that can be extended indefinitely; it has to use a fair amount of fuel just to maintain its orbit. But conservative use of fuel during cruise (including the pioneering use of solar sailing to fine-tune the trajectory, obviating the need for trajectory correction maneuvers) has allowed them to eke at least one more year out of the hardworking spacecraft. Watch their gallery for regular image releases, like this unusual, high-resolution mosaic of Mercury's limb..

The twin spacecraft of NASA's GRAIL mission launched successfully on September 10. They're now cruising to the Moon; GRAIL-A will arrive on December 31, 2011, and GRAIL-B on January 1, 2012. Their mission to map the Moon's gravity field will last for only 82 days.

NASA's NASA's Lunar Reconnaissance Orbiter is busily mapping the Moon from its science orbit. Last month, they released a fabulous digital elevation model derived from wide-angle camera data, along with a detailed explanation of how they made it.

Out at Mars, it's mid-autumn in the southern hemisphere. (It's currently Ls 136.6.) It's Opportunity sol 2790, and the rover has been noodling around on the north end of Cape York, where local slopes tilt its solar panels toward the north, an angle that will provide it with better power levels through the southern hemisphere winter. It will stay on that side of Cape York for some time but will park (like sister Spirit once did) only for a brief period around the solstice, which comes in about four months. Here is Eduardo Tesheiner's latest route map and Google Earth kml file for Opportunity.

ESA's Mars Express is carrying on with an extended mission, planned to run through 2014. A serious problem has developed with a solid-state memory device that caused it to enter safe mode repeatedly in August and September. Science observations were halted in October, but by the end of November, ESA had developed a workaround that has permitted the spacecraft to return to limited science activities, using only one instrument at a time. Further work should allow the spacecraft to return to multi-instrument operations, nearly to its pre-anomaly activity levels. But it's a sign of age on a spacecraft that's been in orbit for eight years, and a reminder that the three Mars orbiters will not last forever. The anomaly has precluded the use of the Mars Webcam in the last month.

NASA's Mars Reconnaissance Orbiter is keeping an eye on Mars' weather with MARCI; they report scattered dust storms across Mars in the past few weeks, but mostly clear skies for Opportunity. As always, check in on the latest captioned image releases from HiRISE for your dose of spectacular photos.

NASA's Mars Odyssey is now the longest-lived spacecraft ever to operate at Mars. You can see the latest from its THEMIS instrument here. I really like the lobate lava flows on this image. One flow has nearly completely filled in a crater -- a reminder that Mars' geologic history is long and complex.

NASA's Dawn spacecraft has nearly reached its Low Altitude Mapping Orbit at 180 kilometers' elevation; according to the "Where is Dawn Now?" page, it's at an altitude of 230 kilometers above Vesta. According to the recent Mission Status Reports, the spacecraft is currently using Vesta's gravity field to adjust the orientation of its orbit, an operation that Marc Rayman has promised to explain in his next Dawn Journal. Here's a timeline summarizing the Vesta phase of the Dawn mission..

Right now the NASA-ESA-ASI Cassini spacecraft is just finishing its Rev 157. Cassini has been in an 18-day-long equatorial orbit of Saturn for many months, and that will finally change on December 13, when a targeted flyby of Titan will lengthen its orbit to a more leisurely 24-day one. The Titan flyby comes only 34 hours after an incredibly close, 98.8-kilometer pass by Dione on December 12. Flybys that close are intended for the fields and particles instruments to taste the moon's atmosphere; but I'm sure there will be imaging, too. To see what Cassini's doing when, check out my long and detailed page on Cassini's tour of the Saturn sytem, and look to the Looking Ahead page on December 4 for more detail on Cassini's plans for the month.

NASA's New Horizons has 10.6 AU to go to reach Pluto. There are 1322 days left until Pluto closest approach. It's on course for a January to July 2015 encounter with the Pluto and Charon system. The mission held a workshop last month to bring together experts who might be able to advise the mission on whether the discoveries of more moons within the Pluto's system also means the discovery that the system is too hazardous for New Horizons' planned trajectory. In the meantime, the search continues for New Horizons' future Kuiper belt target(s); go to icehunters.org to help them with their search!

Juno spacecraft is outbound from the Sun. Informal status updates get posted to its Twitter feed; it's already traveled 2 AU and has "healthy subsystems." It's already near Mars' orbital distance from the Sun (though nowhere near Mars itself); it'll go well beyond Mars' orbit before it heads sunward again. An Earth flyby in August 2013 will send it on to a July 2016 Jupiter arrival.

As I write this, the eventual fate of Phobos-Grunt and Yinghuo-1 is unclear. But the likeliest future for the spacecraft, now stuck in a low-Earth orbit, is to reenter Earth's atmosphere sometime in January. Still, all hope is not yet lost. ESA has come to Russia's aid with its tracking stations and continue to radio commands to it; at present, it is trying to command Phobos-Grunt to raise its orbit. For blow-by-blow updates of the often disheartening story, visit RussianSpaceWeb. If Phobos-Grunt does reenter Earth's atmosphere and if its reentry point is known, it's distinctly possible that our Phobos LIFE experiment would survive the fall, encased inside the Phobos sample return capsule.

NASA's next great rover Curiosity, or Mars Science Laboratory blasted off to Mars on November 26. When spacecraft launch for Mars, they are intentionally targeted well away from the planet just in case something goes wrong, to prevent the Centaur upper stage from crashing into Mars. Now that the spacecraft is safely on its way, it'll be performing a large trajectory correction maneuver on December 11 to aim it much closer to its intended atmospheric entry point. Curiosity will be landing in Gale crater on August 6, 2012, just after 5:00 UTC (August 5, after 10:00 p.m. here in Los Angeles). On Mars, it will be in the midafternoon of a late winter day in the southern hemisphere at the landing site at 4.49°S, 137.42°E. Its nominal mission will last one year but it should go on much longer.

JAXA's Akatsuki is now in solar orbit, on its long cruise to a second encounter with Venus. Last month JAXA performed a 10-minute test firing of the reaction control thrusters to modify Akatsuki's orbit.

JAXA's IKAROS flew past Venus in December and has been operating successfully since May 21, 2010. The spacecraft has spun up in its backward direction to 4.5 rpm -- pretty fast! It is expected to run out of maneuvering fuel some time between now and January. Follow the IKAROS blog to keep up with its contacts with Earth. It is getting much harder for Earth to pick up its faint signals, but still makes regular contact.