I can summarize the news about the last day's efforts to save Phobos-Grunt in three words: there is none. At least nothing official. The world's press is churning and churning on what might or might not have happened, and who is to blame, but the fact is that neither ESA nor Russia has reported any contact with the spacecraft despite all their efforts. And without any contact with the spacecraft, or official statements from Roscosmos, it's impossible to know whether it's alive or dead, salvageable or about to become another (unusually dangerous) manmade object falling out of the sky at an unknown future time and place.

If it can be revived, it must fire its engines to depart for Mars before November 21, or it will miss the window. If it cannot, it will fall to Earth in late November or early December, depending on the source, and of course also dependent on the level of solar activity. NORAD's analysis says November 26; unnamed Russian "experts" are quoted questioning NORAD's analysis and stating December 3. I am frankly puzzled that anybody can state a specific date, given the uncertainties that attended the orbital decays of UARS and ROSAT.

The only other piece of news worth reporting is that amateur astronomers have looked at the spacecraft and reported that its glint appears to have a steady brightness, suggesting that the spacecraft is not tumbling. This, in turn, suggests that the spacecraft is still actively controlling its orientation in space, so that's one piece of good news. At the same link Ted Molczan says that the orbit has actually appeared to rise slightly. This could be due to active control of the rockets, or it could be to leaking or venting from somewhere in the propulsion system (in which case the spacecraft may begin to tumble), or the apparent rise in the orbit could be spurious. I'd keep an eye on the SeeSat mailing list to see what else the amateur astronomers report over the coming days. And to RussianSpaceWeb, which has a terse summary of the little information that is currently known. 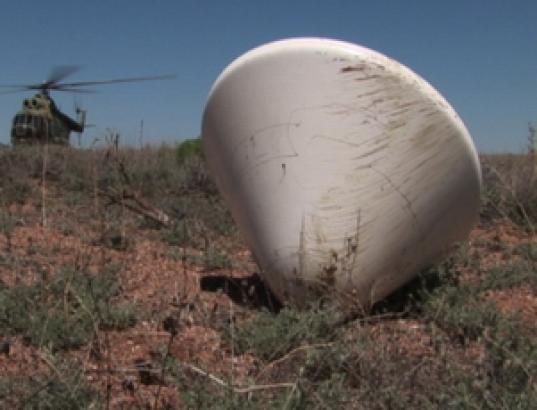 A snapshot from a test of the search for the Phobos-Grunt sample return capsule. The conical capsule had no parachute; it was designed for a hard landing.

Elsewhere, there's not much but speculation going on. And a lot of blame and Monday-morning quarterbacking and hopelessness. For my part, I will not say, as some have, that the mission is definitely dead. It looks bad, but until Roscosmos says it's dead or until its orbit decays, I'm not giving up on it, because I know that there are men and women in Russia who have put their hearts and souls into this spacecraft and even now must be trying increasingly desperate things to save it. I won't give up until they do, and I still hope that they will succeed. At the same time, I also hope very much that there are people giving a serious look to how to mitigate the hazard represented by a fully-fueled, very large interplanetary spacecraft falling out of the sky, at least one small piece of which was designed to survive a ballistic reentry into Earth's atmosphere. That's the sample return capsule. Which has our Phobos LIFE biomodule in it.

With that introduction, here's a snapshot of some of the latest news. Everything is RIA Novosti unless stated otherwise.

Here is the Roscosmos news site, which, as I mentioned before, has posted no news on Phobos-Grunt since Tuesday. But I'll keep checking.

Nov 10 16:32: "Chances of survival are melting" - A lengthy story, discussing further attempts to hail the spacecraft, increasing concerns about it falling to Earth, the blow to Russian prestige, and the fact that its failure will not affect the rest of Russia's ongoing plans for manned (Soyuz) launches to the Space Station or unmanned (Proton) launches for many international customers, nor would it automatically cause cancellation of Luna-Glob, Venera-D, Mars-Net, or other future robotic projects.

Nov 10 18:13: "Astronomers will assess the 'Phobos-Grunt' with telescopes" - Discusses attempts to image the spacecraft to determine whether its solar panels were pointed at the Sun. (This would be much better than if the spacecraft were tumbling.)

An Interfax story from 19:53 says that failure of Phobos-Grunt may lead to reform of Russian Space Agency.

Nov 10 20:52: "Experts are trying to give the 'Phobos-Grunt' team in the round of its systems" - Discusses attempts to issue direct commands to the spacecraft transmitter, bypassing onboard systems. It also gives the important fact that, assuming the spacecraft can be recovered, the window for departure to Mars is open until November 21.

Nov 11: Not a news item, but an op-ed from Konstantin Bogdanov: "Along with "Phobos" Russia will lose its deep space", discussing "broad" problems in the Russian space industry.

Nov 11 07:41: "'Phobos-Grunt' will not fall to Earth until December 3, the source said" - faults the NORAD prediction of November 26 for the reentry of Phobos-Grunt, but also points out that the date is strongly dependent on the level of solar activity.

Nov 11 11:35: "Developer of the 'Phobos-Grunt' is responsible for the emergency, said the expert" - The blame game is already starting. An unnamed "expert in the space industry" blames Lavochkin.

Nov 11 12:42: "'Phobos-Grunt' in Moscow has fallen, says expert" - A space industry expert (Igor Lisov) speculates about the capability of China or the U.S. to shoot down Phobos-Grunt (not a bad idea, as it would burn up the toxic fuel rather than spread it in a cloud in a crash), but also points out that since Moscow is farther north than the 51 degrees of latitude that Phobos-Grunt's orbit reaches, the Russian capital is one place the satellite definitely won't fall.

Nov 11 13:33: "Bloggers offer to bring down the 'Phobos-Grunt' rocket" - discusses public reaction to the situation.

An article in the Vzglyad newspaper quotes an unnamed source saying that "The fate of the station 'Phobos-Grunt' to be decided in the coming hours," that if recovery efforts aren't successful soon, all hope is lost, though engineers will try to keep working to "save face."

Nov 11 15:25: "'Phobos-Grunt' threatens the five continents" - A lengthy story, summarizing current recovery efforts, again stating that it will fall to ground December 3, and assigning blame for the failure.

There's more, but I think it's really not worth the time to keep on looking for news. I think I will probably not write about Phobos-Grunt again until I either hear that the spacecraft has contacted Earth, or until there are more specific predictions about when and where it will fall and what hazard it represents.