NPP Earth observatory launched successfully, and I was there!

Well, that was awesome. The NPP Earth observation satellite launched successfully an hour or so ago, and I was with a chilled but thrilled crowd of a few hundred people to watch it at Vandenberg Air Force Base.

I spent the previous day with 25 other Tweeters enjoying the rare privilege of a tour across the Vandenberg launch facilities, which I will have to write up later. One of the highlights was being at Space Launch Complex 2 near sunset to witness the rollback of the tower that revealed the Delta 2 rocket, with the NPP spacecraft inside its tip. 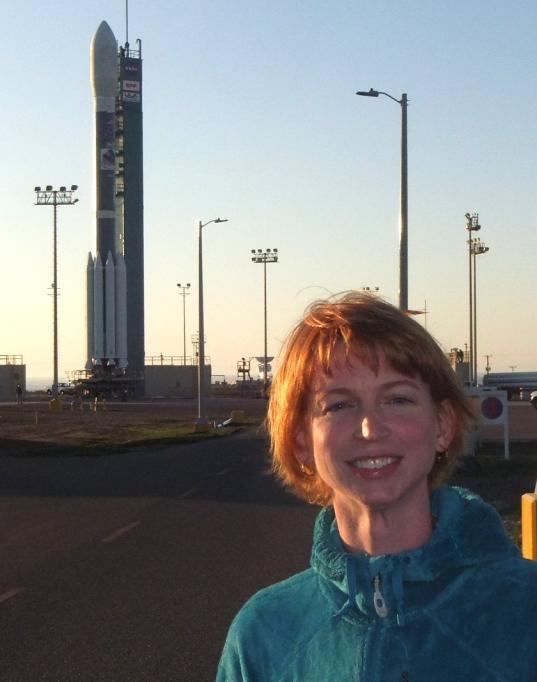 At Vandenberg's Space Launch Complex 2 with the NPP Earth observatory's NASA Tweetup, Emily got close to the launch pad for the last Delta 2 on the launch manifest.

After catching a few hours' sleep, Jason Davis and I drove out to the public viewing site on a low ridge to the east of Vandenberg. The weather was unbelievably clear (apparently a really rare circumstance for this time of year). The site afforded an unobstructed view of the floodlit launch pad and rocket a few kilometers to the west. But there was an even better view overhead: thousands and thousands of stars. The Milky Way made a faint cloudy stripe across the sky. And Jupiter blazed so brightly that its bit of sky lacked the faint stars I could see elsewhere. I even saw three shooting stars. For this Los Angeles resident pinned to home at night by small children, such a night sky is also a rare privilege.

I dutifully Tweeted the moments leading up to the launch, including one to remind myself of the immediate post-launch events, but when the countdown passed T minus 4 minutes I put the phone in my pocket and relaxed to take in the view.

Launch occurred, officially, at 2:48:01.828 Pacific time. We all yelled as we saw the rocket ignite but I was unprepared for the incandescent brilliance of the rocket's flames; an afterimage dogged my view for the rest of the launch. Within about a second its wash of light had wiped all but a few stars, and of course, Jupiter, from view. As it lifted off, first straight up, then arcing to our left (to the south, and also incidentally toward Jupiter), the increasing distance between the rocket and us allowed the stars to start twinkling back in to view. Here's an amazing photo from Ben Cooper. The smoke curls around Jupiter, framing it. 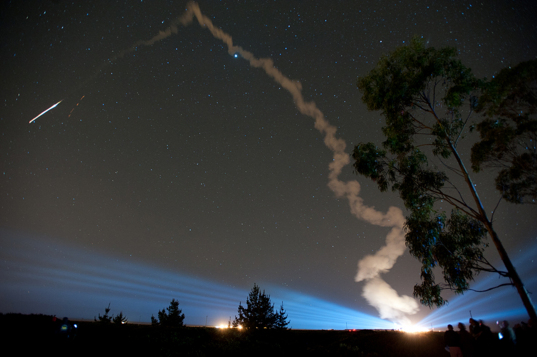 The Delta 2 rocket pierces a star-filled sky on its way to orbit carrying the NPP climate and weather observatory.

The sound reached us maybe 20 seconds or so after launch, and it was rumbly, but actually quieter than I had expected. (The crowd yelled a second time.) A minute or so later, there was a little spark, marking the separation of six of the nine solid rocket boosters. For a minute or so you could see their faded red burning-out tips twinkling in and out of view, as they tumbled in their long, long fall toward the ocean. (Check out Ben's photo and you can see those red lights behind the rocket.) Another thirty seconds or so and the three air-lit boosters fell away.

Here's a NASA video of the launch.

The crowd began to chatter, but I kept watching because I knew main engine cutoff, second stage ignition, and fairing separation were coming up at about four and a half minutes after launch, and I wasn't sure if there would be something obvious to see. The light began to fan out, maybe a contrail or maybe it was lighting up some thin upper-level cloud, I'm not sure. Then, at main engine cutoff, the bright light snuffed out rather quickly, and then there was this quickly expanding circle of light, like a smoke ring, that was gone almost as soon as it had appeared. Only a very faint glow marked the ignition of the second stage, but very quickly it was gone, and only the dark smoke trail marked where the rocket bad been. The stars were all back.

Now I'm back in my hotel room and have heard confirmation that NPP's second orbit injection burn went well; the spacecraft has separated, established communication with Earth, opened its solar panel, and is now power-positive -- it's a healthy, viable spacecraft, ready to take on the duties of the aging Aqua orbiter. The upper stage of the rocket hasn't yet completed its work; it's still got six CubeSats to deploy. I hope to find time to write up my notes from the tour soon. But at the moment, my number one priority is a few hours' sleep before I hit the road to return to Los Angeles!