A new trick for IKAROS: Spinning the other way

JAXA's solar sail demonstration craft IKAROS is still puttering along, 17 months after it launched, and its controllers back on Earth keep coming up with new things to try with it. I'm pretty amazed by the most recent trick: reversing its spin direction. This may not sound like a big deal, but it is, especially for IKAROS. 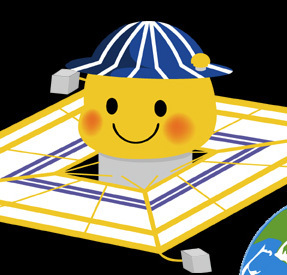 Avatar for "Ikaroskun," the Twitter persona of the IKAROS mission.

Spacecraft spin in order to keep their orientation in space stable. Why do you need this stability? According to the Basics of Spaceflight:

A spacecraft's attitude must be stabilized and controlled so that its high-gain antenna may be accurately pointed to Earth for communications, so that onboard experiments may accomplish precise pointing for accurate collection and subsequent interpretation of data, so that the heating and cooling effects of sunlight and shadow may be used intelligently for thermal control, and also for guidance: short propulsive maneuvers must be executed in the right direction.

There are two ways that spacecraft achieve this stability, again, from the Basics of Spaceflight (an oldie but goodie resource well worth a reread now and then):

Spin: Stabilization can be accomplished by setting the vehicle spinning, like the Pioneer 10 and 11 spacecraft in the outer solar system, Lunar Prospector, and the Galileo Jupiter orbiter spacecraft, and its atmospheric probe. The gyroscopic action of the rotating spacecraft mass is the stabilizing mechanism. Propulsion system thrusters are fired only occasionally to make desired changes in spin rate, or in the spin-stabilized attitude. In the case of Galileo's Jupiter atmospheric probe, and the Huygens Titan probe, the proper attitude and spin are initially imparted by the mother ship.

3-Axis: Alternatively, a spacecraft may be designed for active three-axis stabilization. One method is to use small propulsion-system thrusters to incessantly nudge the spacecraft back and forth within a deadband of allowed attitude error. Voyagers 1 and 2 have been doing that since 1977, and have used up a little over half their 100 kg of propellant as of April 2006. Thrusters are also referred to as mass-expulsion control systems, MEC, or reaction-control systems, RCS.

Another method for achieving three-axis stabilization is to use electrically-powered reaction wheels, also called momentum wheels. Massive wheels are mounted in three orthogonal axes aboard the spacecraft. They provide a means to trade angular momentum back and forth between spacecraft and wheels. To rotate the vehicle in one direction, you spin up the proper wheel in the opposite direction. To rotate the vehicle back, you slow down the wheel. Excess momentum that builds up in the system due to external torques, caused for example by solar photon pressure or gravity gradient, must be occasionally removed from the system by applying torque to the spacecraft, and allowing the wheels to acquire a desired speed under computer control. This is done during maneuvers called momentum desaturation, (desat), or momentum unload maneuvers. Many spacecraft use a system of thrusters to apply the torque for desats. The Hubble Space Telescope, though, has sensitive optics that could be contaminated by thruster exhaust, so it used magnetic torquers that interact with the Earth's magnetic field during its desat maneuvers.IKAROS, with no scientific instruments or high-gain antenna to point, didn't need the more complicated 3-axis stabilization. But there is one very important reason for IKAROS to spin that is, I believe, unique among solar system exploration craft: it's absolutely necessary for IKAROS to spin in order to keep its sails expanded.

IKAROS depended on centrifugal force to deploy its sails in the first place, as explained in the diagram below. I followed every step of this deployment as it unfolded (ha ha): tip mass deployment, May 30, 2010 - first stage deployment, June 9 - Full sail deployment confirmed, June 10. 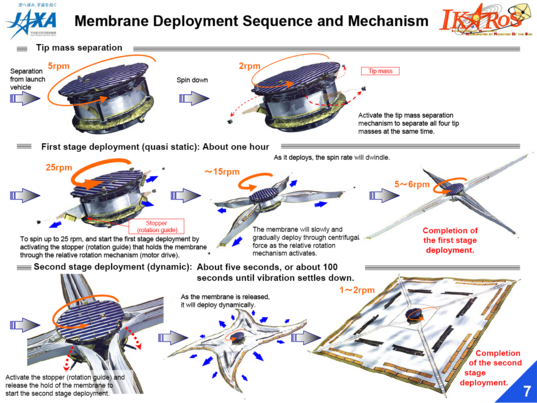 Since deploying its sails, IKAROS has continued to spin at a low rate, usually around 2 revs per minute, a rate that is large enough for the masses at the four corners of the sail to keep tension on the sails and keep them in a square shape whose orientation can be controlled the old fashioned way, with thruster firings.

If you want to spin this spacecraft in the opposite direction, you must pass through zero. This is a hazardous moment for a craft with sails; the sails luff, losing their stiffness. In fact, if I'm reading today's entry in the IKAROS blog correctly, early simulations showed that even to attempt such a maneuver with IKAROS could tangle the sails -- just folding them could result in them "sticking," I assume electrostatically -- which would doom the mission (the Google translation calls it a "suicide operation.") But the same entry says that they have been practicing for some time at very low spin rates of around 0.2 revs per minute, and the data they have acquired during this slow-spin campaign has improved their models and indicated that the maneuver could be successful.

Why do it at all, and risk the spacecraft? This mission's whole purpose is to develop expertise in handling sailcraft beyond Earth orbit. Reversing spin might be necessary for future spacecraft, JAXA explains, to cope with thermal conditions and instrument or communications system requirements. In the seventeen months since its launch, JAXA has learned much. But the mission will be coming to a natural end soon. According to this blog entry, IKAROS was, as of September 3, estimated to have only 3.4 kilograms of maneuvering fuel remaining out of an initial 20 kilograms. Furthermore, the increasing distance between IKAROS and Earth is making communications increasingly difficult, especially because IKAROS has no steerable high-gain antenna. The spacecraft is now only capable of transmitting at 8 bits per second. The same blog entry contains a sentence about when the propellant is expected to be depleted, but Google translate stumbles on the date information, so I don't understand when that is expected to happen. But it won't be long. In the last months of the mission, JAXA can perform increasingly risky maneuvers with their demonstration craft, seeing how far they can push its materials and the expertise of its pilots.

This has been such a fun mission to watch! I'll hate to see it go.