JAXA finally issued the formal announcement: they successfully expanded IKAROS' square sail! Not only that, but the sail's thin-film solar cells are generating power! Hooray for JAXA and hooray for IKAROS! They haven't demonstrated actual solar sailing yet -- that's still to come, and may be weeks in the future -- but with today's announcement they've achieved their stated minimum success goals for the mission, so it's definitely time to celebrate!

There's pictures to prove the sails have deployed. First, here's a diagram to orient you. Remember that the cameras are bolted to the spacecraft, and are looking out along the sail, so the photos will show you a very severely foreshortened view of the deployed sails: 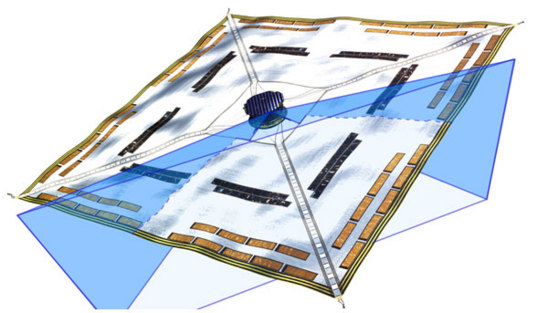 OK, so, here you go -- here are the four photos showing the four sail corners -- scroll down and I'll explain what you're seeing: 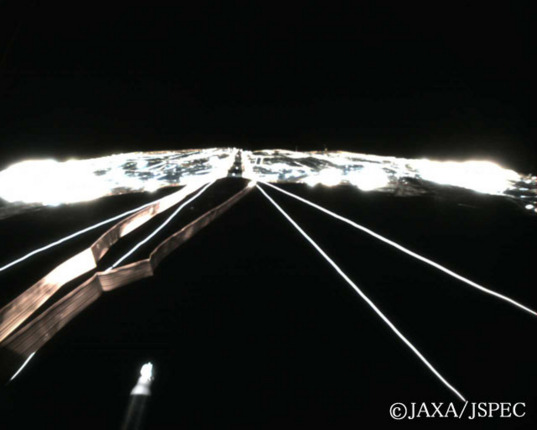 The solar sail aboard the IKAROS spacecraft successfully deployed on June 10, 2010, and was captured by one of the spacecraft's onboard cameras (Cam 1).

These may not look like you expected them to, but here's why I believe JAXA when they say it looks good (not that I wouldn't have believed them anyway, but I feel like I can see it for myself). The biggest thing is that all four images look pretty much the same. If there had been an issue with deployment, it very likely would have affected one sail more than another; but I see all four sails occupuying basically the same part of the field of view. The other important thing is that each sail is attached to the spacecraft by two pairs of guylines, which come together at the corner of the square gap in the sail immediately in front of the camera. All of those guylines -- all sixteen of them -- appear taut or nearly so, suggesting that the sail is fully expanded and tugging evenly on the lines.

In addition to the guylines, there are also two flat tapes in each image, which are not taut. My understanding (I'll have to check with Lou to be sure) is that those are electronic connections between the sail and the spacecraft. Those are what are carrying the power that is now being generated by the thin-film solar cells on the sails.

Finally, each image contains a little stick in the left foreground; those are the rollers that formerly held back the sails in their folded condition. Releasing those is what triggered the second stage of sail deployment, allowing the sails to expand.

According to the IKAROS blog, first stage deployment was completed on June 8; the second stage was commanded on June 9, by which time the spacecraft was 7.4 million kilometers (46 light-seconds) from Earth. Their first indication that deployment had worked was from the reduction in the spacecraft's spin rate, noted in its telemetry. Then the camera images came down, confirming deployment. Finally, on June 10, the expansion was complete, with the sail cleanly stretched; and that's when they confirmed the successful operation of the thin-film solar cells and the achievement of minimum mission success.

So, COOOL!! And, again, congratulations! Planetary Society Executive Director Lou Friedman has this to add: "The successful deployment of a solar sail by the IKAROS team is a great accomplishment and major step toward solar sail flight. Congratulations to JAXA's Japan Space Exploration Center team for a terrific job. The Planetary Society and our LightSail team admire the work done by IKAROS and look forward to them achieving their goal of controlled solar sail flight. We plan to join them in the ocean of space soon."

Finally: I wish I could have some of this cake, which was evidently enjoyed in IKAROS mission control earlier today: 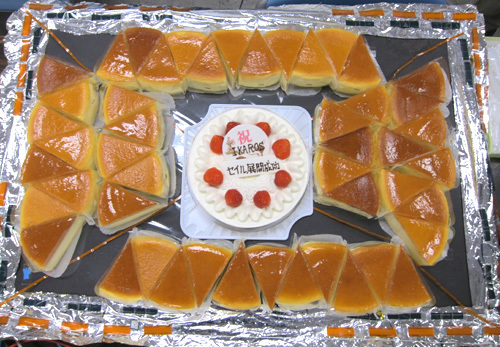