Today Bill Nye is on a flight to Ithaca, where he'll celebrate the completion of a project that he's been dreaming of for 13 years. The project: making a clock out of a blank 3-meter-diameter circle at the top of the pediment of Rhodes Hall, which will have a "Solar Noon" feature lit with sunlight piped from the roof (and yes, they've accounted for the fact that Cornell's skies are almost permanently cloudy). Anybody who's ever spent more than a few minutes talking to Bill knows about his fascination with solar timekeeping, a fascination that can be traced back to his father's experiments with solar timekeeping performed during 44 months spent as a prisoner of war during World War II. Below is a little background information on the clock written by Planetary Society staff, and here is a more personal account from Bill. --ESL 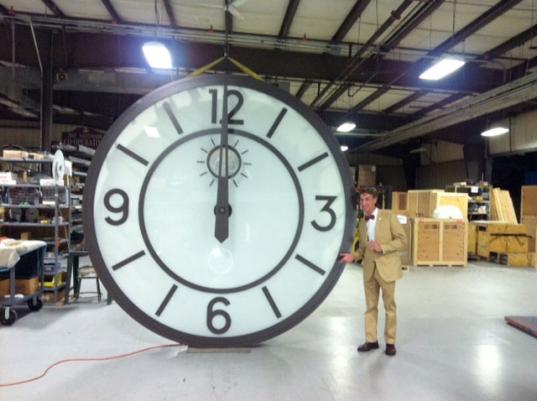 Rhodes Hall Clock in the Warehouse

Bill Nye with his Rhodes Hall Clock in the warehouse before its installation.

Bill Nye the Science Guy® and Executive Director of the Planetary Society will be at his alma mater, Cornell University, this Saturday, August 27, for the dedication of a remarkable Solar Noon Clock that has been installed on the front face of Rhodes Hall on the Cornell campus.

The design is unique. A lens on the roof directs sunlight through a duct to the back of the clock's face. When the Sun is highest in the sky, at what is called "Solar Noon," two small motor-driven doors open and allow the bright light to illuminate a sun-shaped design below the number 12 on the clock's face. The clock's time signals come from global positioning system satellites, and the precise timing of solar noon is provided by an electronic controller designed by outstanding Cornell Engineering students.

Nye's goal with the clock is to inspire people everywhere to pause and consider how we came to know the Sun's motion through the sky and the astonishing accuracy and utter common-place nature of our modern time-keeping. He hopes people will stop and consider the bravery and diligence of our ancestors, who reckoned time with the Sun and gave us all an understanding of our planet's remarkable position in the cosmos, our place in space.

Both of Nye's parents believed in education, especially math and science education. The idea for the clock's solar noon feature was inspired by Nye's father, who became fascinated with sundials while a prisoner of war during World War II. During the War, Nye's mother was a Navy cryptographer working to decipher the notorious Nazi Enigma Code. Read more about the story behind the Solar Noon Clock.

A diligent donor, Nye has been putting money in a fund for the clock since he had the idea that one should be installed on this Gwathmey-Seigel building in 1998. Nye was graduated with a Bachelor of Science in Mechanical Engineering. After ten years in aerospace, Nye became the Science Guy® and co-created a show on which he won seven Emmy awards. The show won 18 in five seasons. Nye later served as one of Cornell's visiting Frank H. T. Rhodes professors. He now leads the Planetary Society, an organization co-founded by Cornell's Carl Sagan.