Gale's not the only Martian crater with an "enigmatic mound"

Much has been made of the "enigmatic mound" within Gale crater, which will be the target of the Curiosity Mars rover's investigations once it safely lands there next year. (Knock on wood.) The mound is 5,000 meters tall; it's so tall, in fact, that it stands higher than most of Gale's rim. This is one reason that geologists think that Gale -- and everything around it -- used to be buried much more deeply, and it's been "exhumed" over time. 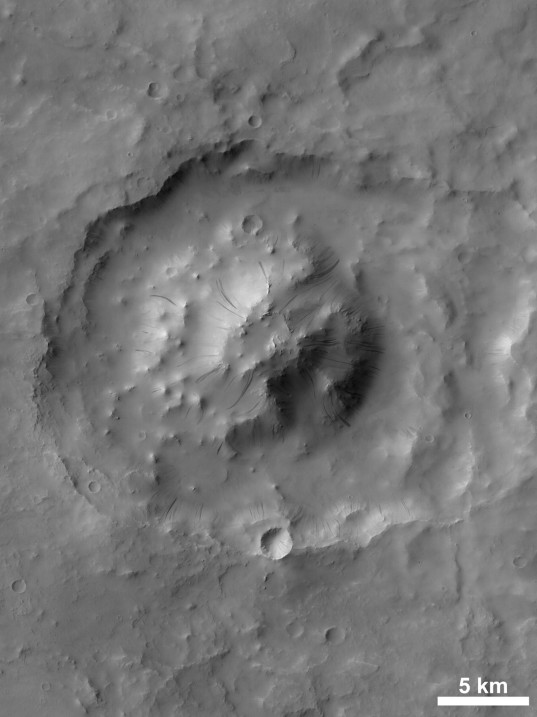 An unnamed Martian crater, about 25 kilometers in diameter, has a central mound much taller than its rim. Both central mound and rim exhibit numerous dark slope streaks in various stages of fading.

It's not obvious how tall the mound is from a bird's eye view, but the Context Camera team has taken the two pictures of this crater needed to create 3D views. This one has 3x vertical exaggeration, so keep that in mind, but even if it were not exaggerated, that mound would look quite a bit taller than the rim: 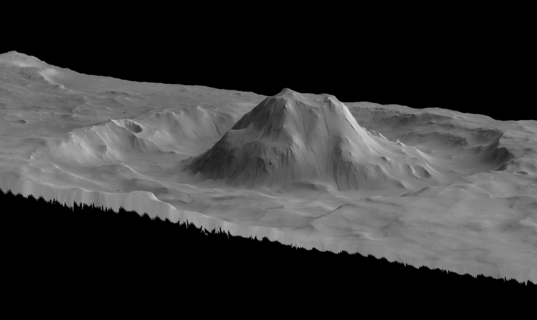 An unnamed crater in Arabia Terra has a central mound that stands a kilometer above its rim.

I came across this crater in a presentation given by Ken Edgett to the MSL Landing Site Selection meeting in 2008. (Watch out, that presentation is 89 MB.) I asked him about it and he had a lot of interesting things to say, including his usual informative asides:

This mound is indeed illustrative of the concept that some Mars craters have been completely filled and buried and exhumed; in this case, we can tell that the crater was buried to at least a depth equivalent to the height of the mound, which exceeds the height of the crater rims. Of course, one has to ponder the relative resistance to erosion of the crater rims versus the fill material; more often than not on Mars we see that the crater walls, rims, etc., are more resistant than the fill material, but that is not always the case; there are plenty of circular mesas, for example, representing all that remains of what was once a crater... I guess, usually, though, these might be crater floors that are now left standing higher than their surroundings; I'd have to spend some time poking around to refresh my memory as to whether there are good examples of clear and obvious "fill" material that has been left behind while the crater went away.

Anyway, back to this particular figure, it is true that this mound is covered with dust (and slope streaks formed in that dust) and so you can't see the rocks. But it is also true that there's really no expression of layering here, either... no shelf-bench features, etc. Whether that means this "fill" material is not layered (i.e., it is "massive") or whether it means the layers are much finer than we can resolve (I think there's HiRISE images of this; I haven't checked), and/or that the layers are so uniform in composition that you don't see differences in their erosional expression...who knows.

Other than the fact that this mound suggests the crater was once completely filled and buried, the other thing I like about it is its regional context. Nearby is Henry Crater. Henry is the same size as Gale and it, too, has a mound (or mesa). Henry's mound, though, looks very different from the one in Gale and it looks very different from the one in the small crater in the attached figure. To Henry's immediate southwest there is another crater in which there is a mound. That mound looks different, too, from the one in Henry and the one in this small crater in the above figure. So there are 3 neighboring craters exhibiting mounds of fill material and each one has a different erosional expression and layering or bedding features. This is very exciting; what does it mean? I think it is telling us that, even in these craters very near each other, the environments that existed in each case, and the supply of clastic material (assuming it's *mostly* clastic and not chemically precipitated), were different in each case.So why go to Gale and not one of these others? Because Gale has exposed, layered bedrock containing chemical signals of clays and sulfates. Look at this unnamed crater at high resolution and you'll see that it is very, very, very dusty, and there's little sign of bedrock under that dust, much less any indication that the bedrock's history had anything to do with liquid water. So it's best to appreciate this crater from above. One thing about Mars dust -- it can be very pretty. Check out this detail view. There's many generations of slope streaks, and there are dust devil tracks crossing the streaks! (Note that this image doesn't enlarge -- it's full Context Camera resolution of 6 meters per pixel.)

The image covers an area about 3 by 8 kilometers in extent.