Early MESSENGER science results: Mercury is its own planet, not Moon or Earth

There was a press briefing today giving some early science results from MESSENGER and it was surprisingly meaty. I'm going to focus on just one set of the results that they presented. As usual with MESSENGER, the most exciting stuff is not from the "pretty pictures," although there were some of those, which you can see at the page full of visuals for the press briefing. What's most exciting out of Mercury is what we're learning from the other, relatively arcane instruments on MESSENGER. Whenever you send a spacecraft to orbit a planet for the first time, you're going to wreck a lot of people's neat theories, and this mission is no exception.

The result relates to the composition of Mercury's surface rocks. Pretty much everything in the solar system, from the Sun down to little asteroids, formed from the same initial nebula of gas and dust. But all of these things have different proportions of the different chemical elements, and "cosmochemists" (a job title I love) try to parse those differences to understand the different formation histories of the star, planets, and other stuff, in order to tell the story of how the whole solar system came to be.

MESSENGER's Gamma-ray and Neutron Spectrometer (GRNS) can measure the composition of Mercury's surface rocks (within the top meter or so) from orbit, which is a pretty neat trick. The way this works, as explained by Larry Nittler in today's briefing, is that galactic cosmic rays come screaming into the planet; when they strike atomic nuclei, they produce high-energy ("fast") neutrons. These neutrons bump into other atomic nuclei, which emit gamma rays. The energy of the gamma ray that's emitted when fast neutrons bump into them is different for each type of element, so by mapping the different energies of gamma rays emitted by Mercury's surface, GRNS can develop a map of the distribution of chemical elements across the planet. This kind of experiment produces better results the longer a spacecraft is in orbit, so at this stage the results they have to report concern the most common elements in Mercury's uppermost crust. Here's a plot of those results, and how they compare to measurements on the other terrestrial planets:

Major-element composition of Mercury's surface materials, as measured by the MESSENGER XRS during the first Mercury year of the mission. Mercury has lower ratio of aluminum to silicon and a higher ratio of magnesium to silicon than typical lunar surface materials and terrestrial basalts, indicating a lower fraction of the common mineral plagioclase feldspar, and also indicating that Mercury has a distinct origin from the Moon and Earth.

What's being plotted here is the ratio of the abundance of magnesium to the abundance of silicon on the horizontal axis, and the ratio of abundance of aluminum to the abundance of silicon on the vertical axis. Earth's mantle has a high magnesium-to-silicon ratio, representing its bulk composition. The Moon has a very high abundance of aluminum, a result of its history of having a global magma ocean in which aluminum-rich feldspar crystals floated to the top. Earth's basalts (black lava rock that covers most of the planet's ocean floors) formed from partial melting of mantle rocks, a process in which they get more aluminum- and less magnesium-rich. But Mercury's composition doesn't match the compositions of either lunar or Earth rocks, indicating that its geologic history is unique. Putting on my speculation hat here, I'm wondering if its composition reflects a higher degree of partial melting of its mantle rocks, or if its lavas came from mantle rocks that started out more magnesium-rich than what you find on Earth....

Another result from GRNS (not shown on this plot) overturns an observation made in previous flybys that itself had overturned an observation from Mariner 10. Mariner 10 results suggested that the surface of Mercury had a relatively low abundance of iron and titanium. But flyby data indicated otherwise. Now that MESSENGER's in orbit, they're reconfirming the Mariner 10 results. Nittler remarked that "this shows the power of orbital data versus flybys." He didn't offer an explanation for why the flyby data was discrepant.

Nittler also said that the GRNS data reveal that the surface of Mercury has a relatively high abundance of sulfur, up to a few percent by weight, which is at least ten times higher than that of Earth and the Moon. He said they don't know why this would be yet, though they speculate that it might relate to the explosive volcanic vents that MESSENGER has observed to dot Mercury's surface; explosive volcanism would be explosive because of the presence of gases including sulfur compounds in the lava. This high sulfur abundance is really important to people who are trying to figure out Mercury's formation history -- more on that in just a bit. First, let's look at potassium and thorium at Mercury.

Why care about potassium and thorium? Nittler explained: "The ratio of potassium to thorium has long been understood to be a very useful probe because potassium is a rather volatile element. It evaporates at relatively low temperature, and thorium does not. So this can provide information about the temperatures of processes in early solar system." He went on to say that the Moon has long been known to be strikingly different from the other terrestrial planets in that it is very depleted in potassium. This is one of the important observations that support the giant impact theory of the Moon's formation, in which the Moon would have been very very hot, and would have lost a lot of its volatile elements.

Nittler said that "Prior to MESSENGER, ideas about Mercury suggested that since it formed close to the Sun, Mercury should also have low potassium-thorium ratio." But just look at what GRNS has found: 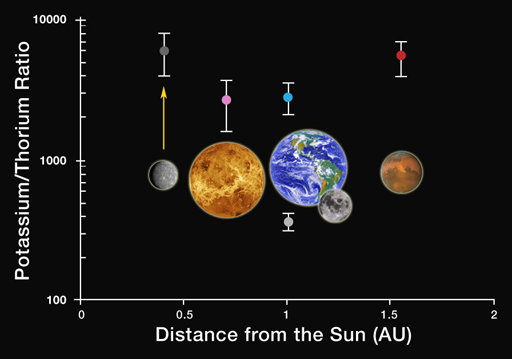 Ratio by weight of potassium to thorium for the terrestrial planets and Moon, plotted versus distance from the Sun. Because K is a volatile element and Th a refractory one, this ratio is a sensitive measure of thermal processes that fractionate elements by volatility. For example, the ratio for the Moon (360) is much lower than that for Earth (3000), reflecting volatile loss during the Moon's formation by a giant impact. The ratio for Mercury (~6000), determined by GRNS, is comparable to that of Venus, Earth, and Mars, indicating that Mercury is not highly depleted in volatile elements, ruling out some models for its formation and early history.

Nittler said, "Surprisingly, it's not low, it's as high or higher than the other terrestrial planets. It rules out some formation models, and it's consistent with the high abundance of sulfur and the presence of sodium in Mercury's exosphere. Taken together, [the presence of high abundances of] these elements are changing our view of the origin of Mercury. Mercury is not the Earth and it's not the Moon."

This may sound obvious, but it's kind of an important point. When we don't understand the geologic history of a place, we usually try to describe it by analogy to places that we have studied. Mercury looks kind of like the Moon but it's denser even than Earth, so its history has often been described as an amalgam of both. But it's its own world, with a history unique among the terrestrial planets.

In the Q and A session Nittler expanded on how these observations are upsetting previous ideas, which I did my best to jot down. "A number of models proposed after Mariner 10 indicated Mercury had an unusually large core. One idea is that it formed like Earth, then because the Sun went through a phase of extreme high intensity, Mercury was so close to this hot sun that the outer layers could have evaporated off. This would have predicted very low abundances of potassium and sodium and sulfur. Other models proposed that it formed from a specific kind of meteorite called CV chondrite that are very very rich in metal. For the most part these are not in detailed agreement with our observations, but variants cannot be ruled out. Another model is that Mercury formed larger and then after it formed an Earth or Moon-like crust, another planet hit it, smashing off the crust and outer mantle. At this point we cannot rule out this model. Some of our data are consistent with this model; whether high sulfur abundance is consistent, we have not yet figured out. There will probably be very many more models devised as we continue to get interesting data.