In the past couple of months I've received several emails from scientists offering clarifications, corrections, or alternative points of view to previous posts, which is awesome and something that I enthusiastically encourage. Here's one of them: Mike Malin wrote to comment on one of my advent calendar posts, specifically, this one: 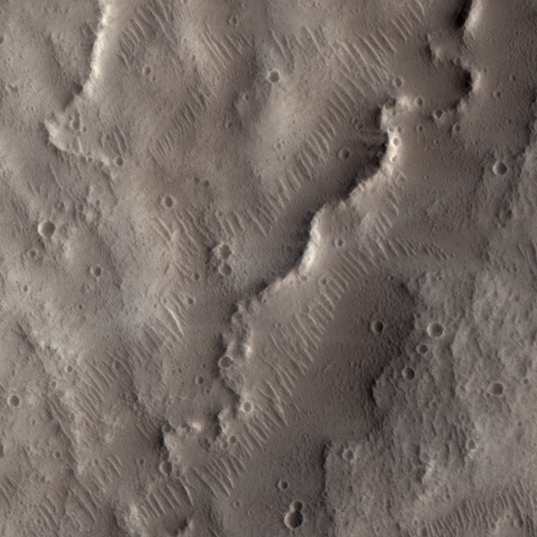 At full resolution the image is 60 centimeters per pixel; the view covers an area about 775 meters square.

About this image, I wrote:

In geology, lots of things make ridges, but the word "sinuous" is virtually synonymous with "created by the action of a fluid." The fluid can be either water or lava. But how could any fluid create a raised sinuous depost?

This HiRISE view from Tempe Terra, Mars shows esker-like ridges. Eskers are a landform common to landscapes that once bore glaciers. Meltwater running underneath the glacier erodes up into the glacier's base; over time, sediment gets deposited within this sub-glacial channel. When the glacier vanishes, a raised, sinuous ridge is left behind. They can have pretty steep sides, looking for all the world like railroad embankments. High-resolution views of Mars are showing all kinds of features that probably have glacial origins.I described these as "eskers" because the HiRISE website had titled the image "Young Esker-Like Ridges in Tempe Terra."

Well, I should have been clued in by the "-like" modifier to the word "esker," which indicates that whoever wrote the caption wasn't convinced the ridges had a glacial origin. Mike informed me that these features are exemplary of topographic features that are found all over Mars and which likely have a variety of origins. Originally, decades ago, he said, they were interpreted as volcanic dikes. Dikes are formed when a subsurface body of liquid magma intrudes into a planar fracture in a body of rock, then cools. Often, the country rock that the magma intruded into is less resistant to erosion than the volcanic rock that makes the dike, so when the rock is uplifted and eroded, the wall-like dike is left standing above the surrounding topography. But dikes are usually pretty much planar; it's highly unusual to see them undulate in the way that these Tempe Terra ridges do.

As with so many other geomorphological features on Mars, Mars Global Surveyor permitted a better understanding. Mike said that around the second year of the mission, they'd accumulated a trove of images showing these raised, undulating or sinuous, often branching ridges at a wide variety of scales. He said, "I recognized that the only way to form these ridges over the observed range of scale, and also importantly to produce the planimetric patterns seen, was by inversion of stream valleys. The canonical interpretation accepted within the community today is that the Martian landforms such as those featured in your example are most likely inverted fluvial streams, not eskers (with eskers being a special sub-case of such streams, subglacial)."

Inverted topography - when a feature that ordinarily would be lower in elevation than the surrounding terrain is instead higher in elevation - forms when low-lying features are filled with erosion-resistant materials (like lava, large rocks or cemented sediments). The softer surrounding material is more easily eroded, which results in the filled-in feature becoming a high spot instead of a dip.

In his email to me, Mike sent along an image from the Context Camera (CTX) showing a wider view of the crater within Tempe Terra that contains the area of the image I originally posted. (The crater is more than 40 kilometers across but, as far as I can tell, it doesn't have a name.) The crater has, Mike said, "a system of ridges and channels reflecting centripetal drainage within the crater. It is actually quite a complex system, consisting of ridges and channels of different stratigraphic and topographic position, with some ridges found down the middle of channels, and some transitioning from channels to ridges and vice versa." This picture really rewards examination, so zoom in. Channels with the usual shape (channel deeper than plains) are visible all around the edges of the crater, but toward the middle of the crater you see lots of those sinuous, raised ridges, and in many places, as Mike pointed out, there are skinny raised ridges occupying the centers of wider sinuous valleys. 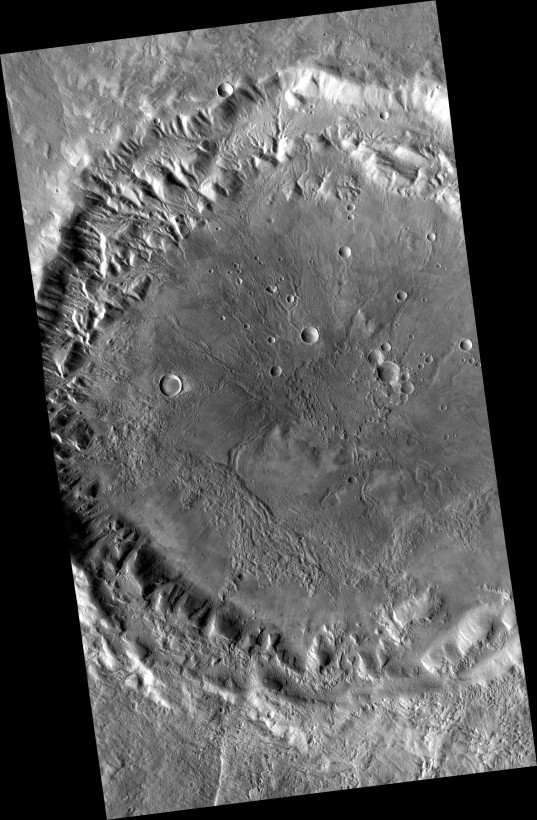 A Mars Reconnaissance Orbiter Context Camera (CTX) image of most of a 44-kilometer-diameter crater within Tempe Terra. The crater includes numerous examples of inverted topography.

In order for those streams to be inverted now, the whole floor of the crater must be "deflated" -- there's lots and lots of country rock that has been carried out of the crater, presumably by wind, and deposited somewhere else on Mars.

Thanks to Mike for his comments!