Tune in to Ustream right now to see Curiosity, the next Mars rover, on its wheels in the "High Bay" at the Jet Propulsion Laboratory. [Not much action happening as I post this; there's a lunch break for the engineers until 1 or 1:30.] Word is that some time this afternoon, Curiosity will roll on six wheels for the first time ever (I've heard 2 p.m. Pacific, but it's not strictly scheduled and could happen before or after). This is a big day for any rover mission! 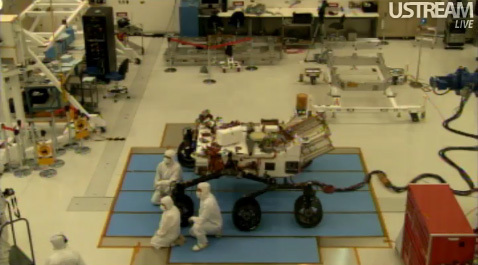 Curiosity on its wheels

In a live webcast from the clean room at JPL on July 23, 2010, the Curiosity rover sits on six wheels. Engineers took the opportunity to take photos of each other with the newly assembled hardware.

The mood seems to be upbeat; lots of engineers in their white "bunny suits" waving at the cameras, mugging for portraits with the rover, and even, just now, doing the robot dance on request from the Ustream chat room. Funny. Just don't trip and fall on the rover, please?

Just for fun, here's a photo of Curiosity's predecessor, the rover later to be named Spirit, at the same moment in her mission: 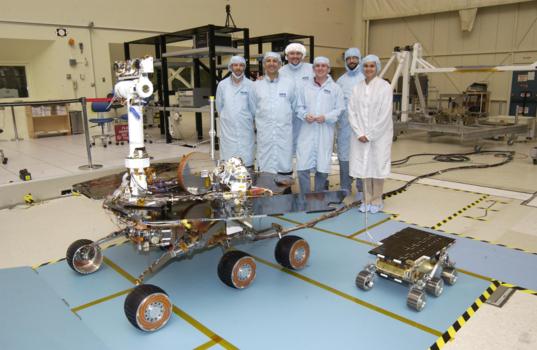 Members of the Mars Exploration Rovers Assembly, Test and Launch Operations team gather around Rover 2 (which was to be named Spirit later) and its predecessor, a flight spare of the Pathfinder mission's Sojourner rover, named Marie Curie, in February 2003, during its first driving test.

Some answers to frequently asked questions about the stream:

Add questions/answers in the comments and I'll pull them in here.