Anticipating the end of Hayabusa

One commenter on my earlier post on Hayabusa said, "Perhaps I'm just reading it wrong (or missing some vital bit of context), but there doesn't seem to be a TCM after capsule separation. That would indicate that Hayabusa follows the capsule down. What happens to the rest of the spacecraft?" 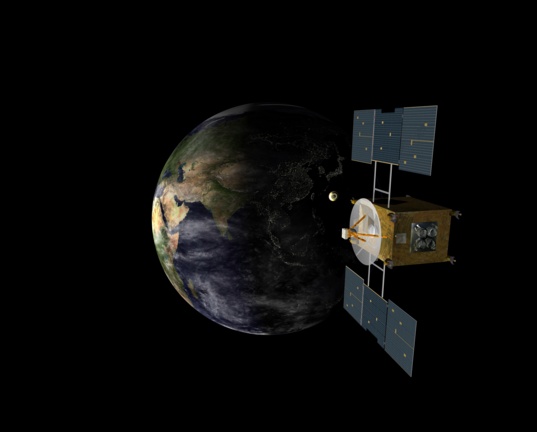 Hayabusa approaches Earth; in this artist's view, it has just released its sample capsule. The spacecraft bus will follow the capsule, breaking into pieces and burning up.

Indeed, a successful sample return for the Hayabusa mission will mean the fiery death of Mr. Hayabusa himself. The poignancy of this is not lost upon the people in Japan who are following the mission. The "Hayabusa: the Final Approach" website has a comment areafor the public to share their thoughts and wishes with the mission, and it is full of remarks like "Was moved to tears several times of the heroic Hayabusa." (The Google translation is stilted, but you get the idea.) There are also blogs written by team members, including one titled "Tears, tears, tears." A Japanese member of unmannedspaceflight.com has translated the text thusly:

This may be a very frequently used expression, but Hayabusa mission has been a challenge to the unknown. Sample return from an asteroid of 500m length which we saw for the first time in human history and all those difficulties associated with the mission.

However, I now wish to touch on another aspect of Hayabusa mission away from its scientific and technological issues. Its key word is "tears". Here, tears is not the usual phrase without which we cannot describe Hayabusa operation. Hayabusa tears are more emotional.

Space missions are often supported by visual materials for publicity. For instance "Inori" (earlier posted about) is one of them. It may induce some tears in some places. However, there is another one created by Osaka City Science Museum, "Hayabusa- back to the Earth".

This video is shown at planetariums across Japan as part of their 360 degrees viewing (46 minutes) and it has been reported that a lot of viewers are seen making their exits with emotional tears. This makes me think.

It is important in life to experience emotions and we all know that, but the fact that you can get those from these seems to tell us that science and technology are there for humans. Hayabusa's biggest contribution may be just that.

Hayabusa and all the other spacecraft out there aren't just machines. They're humanity's representatives to space. We can't yet send humans where these machines go, but we can still feel an emotional connection to their adventures, both the highs and the lows.