Since A. J. S. Rayl was also listening in on today's press briefing about the efforts to extricate Spirit from her predicament at Troy, I'll just hit the high points and send you over to her story when she has posted it.

But first, an amused comment on the makeup of the panel. It was opened by Doug McCuistion from NASA Headquarters, whose script seems to have required him to knock out all hopes for success among the listening audience. He said such things as "Unfortunately, Spirit may have met its match" and "This could end up being where Spirit remains" and "The plan is to send the first commands on Monday, but this process could take quite a while, if it's possible at all to get Spirit out of its predicament." His comments sounded like the warmup to a eulogy. Project manager John Callas and rover driver Ashley Stroupe were more focused on the present: here's the situation, and here's what we're trying next. And then there was Ray Arvidson, deputy project scientist, who neatly balanced McCuistion's pessimism with equal and opposite optimism: he said that while the science from their current position was exciting, "We're ready to button up here and start driving Monday and head to points south."

The most useful graphic from today's press briefing was this one: 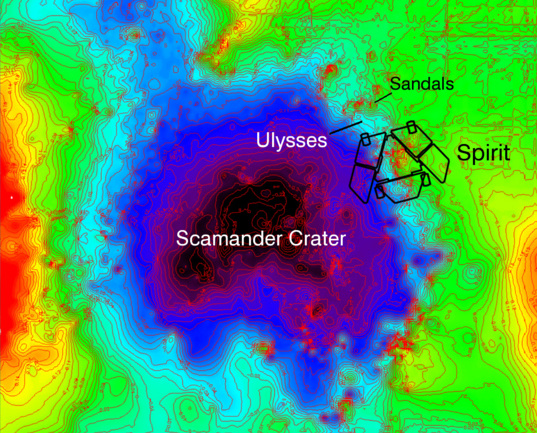 This topographic map of Spirit's location at Troy represents low elevations in black, purple, and blue and high elevations in red. It was developed based upon Spirit's camera images of the location, taken before it got mired at Troy. The topographic model has had a regional slope removed, which reveals that Spirit's left wheels are sitting inside a subtle depression that the team has named Scamander crater. The right-side wheels are outside the depression.

What they have learned is the following.

Sol 2078 was the first that saw any motion of Spirit after nearly 150 sols without a drive. The "drive" actually just consisted of a straightening of Spirit's wheels.