No more rumors: It's now fact that Phobos-Grunt will be delayed to 2011

Today, the Russian space agency, Roscosmos, officially announced a delay from 2009 (next month!) to 2011 of the launch of their Phobos sample return mission, Phobos-Grunt. This is a move that has long been anticipated, but until today the official word was that they were going forward to the 2009 launch. The mission will eventually carry to Mars a Chinese orbiter, Yinghuo-1, not to mention an experiment provided by The Planetary Society, the Living Interplanetary Flight Experiment (LIFE). There is more detail on the delay announcement in a LIFE project update by Bruce Betts here. 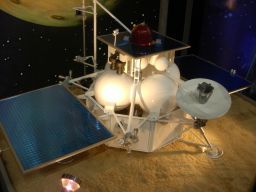 Displayed at the 2007 Paris Air Show at Le Bourget.