EDIT: I just got a couple of the graphs that they showed during today's briefing, which didn't make it on to the JPL or Arizona websites for some reason. They're included below.

There was a long-awaited press briefing from the Phoenix team this week. They had a lot of ground to cover, with no fewer than six presenters in two different locations, each giving a short summary of something newsy, so a list works best to summarize what they had to say: 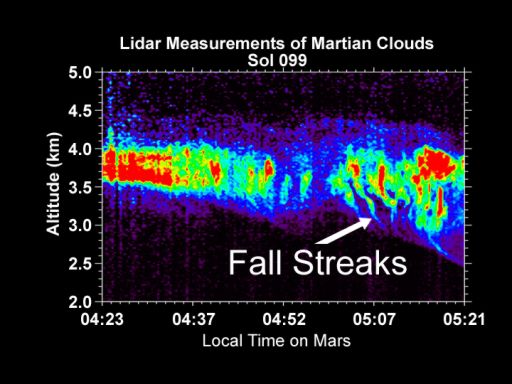 In the early morning hours of sol 99, Phoenix used its lidar (a skyward-pointing green laser beam) to search for clouds. The beam detected clouds at elevations between 3.5 and 4 kilometers above the surface. As the observation continued, it detected "fall streaks," where ice crystals that formed within the clouds began to descend toward the ground; as they descended, different wind speeds at different altitudes caused the sheets of falling snow crystals to shear out horizontally. When the lidar experiment quit operating at 05:21 local time, the crystals had fallen to an elevation of 2.5 kilometers, and probably fell further before they reached air that was dry enough to cause the crystals to sublimate back into a gas. Later in the season, the falling snow may survive all the way to the surface. 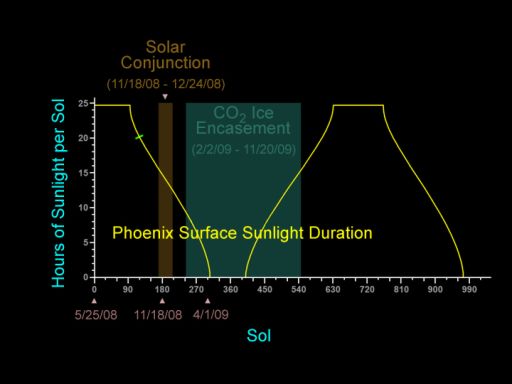 The yellow curve on this graph shows the number of hours of sunlight at Phoenix' landing site in Mars' norhtern plains. For the first 100-plus sols, there was sunlight around the clock. Now that the autumn is approaching, though, the Sun dips below the horizon for longer and longer each day; the green tick mark shows the situation on sol 123 of the mission, September 28, 2008, with darkness about 4 hours per sol. Decreasing sunlight means lower temperatures and less power; Phoenix is not expected to continue functioning past November 2008, through Mars' solar conjunction (marked in brown). With the arrival of autumn, the temperature will get cold enough that Mars' carbon dioxide atmosphere will freeze to the ground, encasing Phoenix in dry ice; the temperatures are cold enough to cause "glassification" and cracking of its circuit boards, most likely damaging the spacecraft too much for it to wake up in the spring.
I think the biggest news from today is the in-situ detection of calcium carbonate. If there was ever a period of standing water on Mars, then theory pretty much requires that carbonate rocks formed, since the atmosphere is full of carbon dioxide -- unless the water was all very acid. But detecting carbonates from space has been very difficult; only recently have the OMEGA and CRISM instruments on Mars Express and Mars Reconnaissance Orbiter started teasing out their signals from among the much stronger signals of other minerals.

I've updated the Robotic Arm Camera images page and my sol-by-sol summary for the first time in several weeks (sorry about that hiatus). There have been some neat images lately. Here's my favorites -- a pair of vanity shots, two cameras on the lander taking photos of each other.

On sol 116, Phoenix' mast-mounted and arm-mounted cameras captured vanity portraits of each other. This animation includes several photos of the robotic arm camera, which turned on sets of red, green, and blue LEDs as the mast-mounted camera watched.
On TEGA, they've opened two more sets of doors, on ovens 2 and 6. Both of them opened in the worst kind of way, with just a tiny gap between the doors. Now only oven 3 is still shut.

It looks like they are trying to deliver material scraped from the organic-free blank to oven 2. (The organic-free blank is a material brought from Earth that they will use to verify any possible organic detection; there is no organic material in the organic-free blank, so whatever signal they want to call "organics" measured from Mars soil had better have a stronger signature than what they see when they test the organic-free blank.) That organic-free blank stuff looks crazily white inside the robotic arm scoop, like freshly fallen snow; here's an image from sol 122 where you can see the dusty stuff inside the scoop. It seems to have another similarity to snow: it blows easily in the Martian wind. Check out this animation (and props to the guys on unmannedspaceflight.com who noticed the material flying away):

On sol 122 Phoenix scraped some material from its organic-free blank (to calibrate the TEGA instrument) and attempted delivery to the barely open doors of TEGA oven 2. As the scoop tilted to drop the fine, bright white material, the wind blew at least some of it away. The eight images in this animation were taken approximately 20 seconds apart, covering a span of about two minutes.
Here's what TEGA looked like afterward -- what a mess! 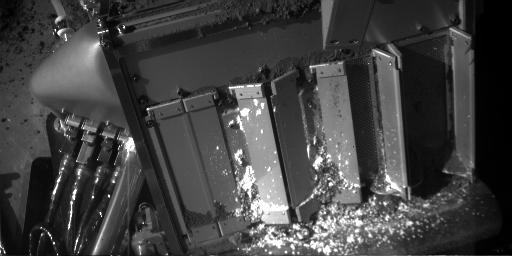