Playing around with Cassini images of Janus

Today's release from the Cassini imaging team was this one of Janus, a still from the sequence that I animated back in February. Just to orient you, Janus is one of Saturn's smaller moons; it orbits just outside the most visible part of the ring system, between the F and G rings. Janus shares its orbit with a smaller moon, Epimetheus, with which it changes places from time to time. At present, Janus is closer to Saturn and Epimetheus is farther; the two will switch places early in 2010. 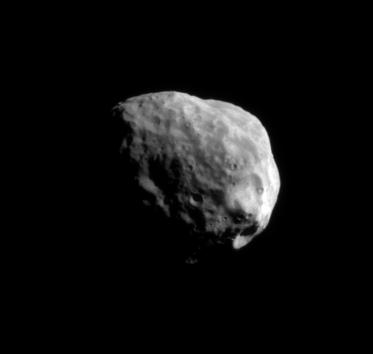 Cassini captured this view onto Janus' south pole on February 20, 2008. Janus is 181 kilometers across; the image scale is 1,010 meters per pixel.
Here's that animation again.

The seven images in this animation of Saturn's moon Janus were captured by the Cassini orbiter as it passed within 200,000 kilometers of the moon on February 21, 2008. The view is down onto Janus' north pole, and during the time that separates the seven images, Janus rotates by several degrees, sending some craters into darkness and bringing others into daylight.
I couldn't remember what kinds of images of Janus have been taken by Cassini, so I wandered through the data set (which is easier to do now that I have created these handy-dandy browse pages) and found that although Cassini has photographed Janus lots of times, there are precious few images taken from within a million kilometers or so. Since Janus is a small moon, only 181 kilometers in diameter (on average), Cassini needs to be reasonably close to it to get a lot of detail.

These are the seven best images that Cassini has taken, which show the moon at a variety of different phase angles. I've resized the images so they all show Janus at the same scale of 1 kilometer per pixel, which is why some of them are fuzzy; all but one of them was enlarged to get to that scale. I did this enlargement based upon the metadata archived with the images, so it should be pretty accurate. Therefore, if some of these images make Janus look smaller than others, that's because Janus isn't a sphere; it's significantly flattened, being roughly 194 kilometers measured across its middle but only 150 kilometers measured through its rotational axis.

These images represent the highest-resolution views of Janus taken by Cassini as of March, 2008. The images have all been enlarged to a scale of 1 kilometer per pixel (except the center one, which was reduced in size slightly to match this scale) and rotated so that their terminators are roughly parallel. They have been sorted by phase angle. From left to right, the phase angles are: 6, 27, 33, 62, 71, 101, and 147 degrees. Original image scales were 2.1, 5.5, 1.3, 0.95, 1.0, 5.4, and 3.2 kilometers per pixel, respectively. All but the fifth image came from the archived data on the Planetary Data System; the fifth image is from a Cassini mission public release.
One of the striking things about Janus is that it's speckled. You can especially see the speckles in the first image, the one that's almost full-phase, but you can also see them in the third and fourth views. In fact, in the middle three views you can even see some dark rings, what look like small craters whose rims are darker-toned than the rest of Janus. A working hypothesis for this speckling is that the uppermost surface of Janus is somehow different from the stuff that lies underneath, and that small craters punch through the lighter surface to the darker stuff beneath it. This is odd because Janus strikes me as being kind of a small object to be layered in this way. But it is by far the biggest of the moons that are referred to as "rocks" by the Cassini team, and it's more than two-thirds the diameter of Phoebe (214 kilometers diameter), which was shown in 2004 by Cassini to definitely be layered. You can see that in this Phoebe closeup: 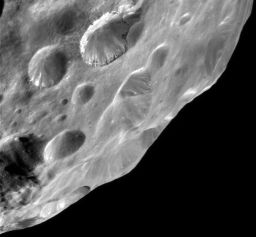 A view of Phoebe from 13,777 kilometers away on June 11, 2004 reveals both old and fresh craters. The sharp-edged crater at the top is named Euphemus. Its walls appear to reveal layering in the upper surface of Phoebe.