I check JPL's Planetary Photojournal every day to see what's new from their various spacecraft, and there have been some particularly pretty images from Cassini lately. This one really caught my eye. In a rare view, we see one of Saturn's icy moons (this one is Rhea) nearly fully lit, what scientists refer to as "low phase." But the background is odd, grading from dark in the upper left to less dark at lower right. Turns out that's Saturn in the background. Because Rhea and Saturn are lit at the same angle -- nearly full phase -- that means Rhea must be perched near the edge of Saturn's disk, where the terminator (or day-night boundary) barely peeks over the edge. You can see the geometry with help from JPL's Solar System Simulator. 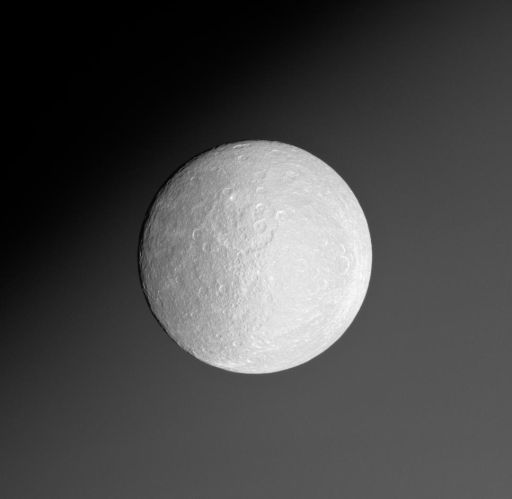 Cassini captured a nearly fully lit Rhea floating in front of Saturn on January 17, 2008. Rhea floats just above Saturn's terminator, the boundary between day and night. Rhea was 576,000 kilometers from Cassini at the time; Saturn is more than twice as far away.
Like most releases from Cassini, this one is black-and-white. I checked at the Cassini raw images website to see if there were images necessary to make a color view, and it turns out there were. They were taken at slightly different times, which means that the combination of Rhea's and Cassini's orbital motions lead to a bit of rainbow color fringing along Saturn's terminator, but it's pretty nonetheless. I think these images are much more powerful in color! I won't vouch for the accuracy of the colors here, though; the filters available were not the red, green, and blue ones necessary to make approximate true-color views; they're infrared, green, and ultraviolet instead, representing information from more of the electromagnetic spectrum than the human eye can see. But I think the image does accurately show Rhea as being more brownish than Saturn's bluish northern latitudes. 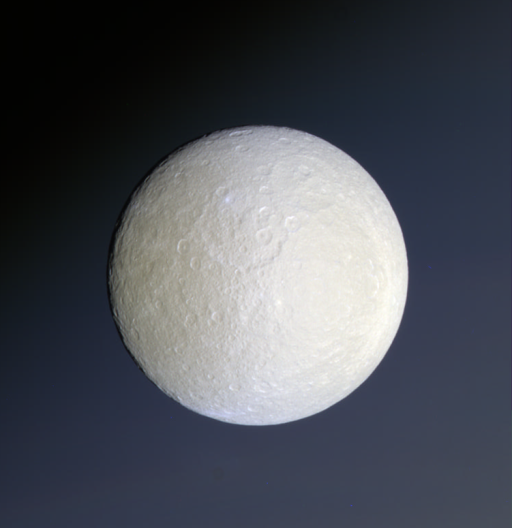 Three views from the Cassini raw images website have been merged into a color view of Rhea floating in front of Saturn, captured on January 17, 2008. The images were captured through infrared, green, and ultraviolet filters, so the color is exaggerated with respect to what the human eye can detect.
While fiddling around at the raw images website I noticed a huge number of recent images of Janus, one of Saturn's small moons. I looked at the first one and the last one and there seemed to be some rotation of Janus between them. So I pulled seven images out of the list (all taken through either clear or green filters) and produced an animation. What's neat here is that we're clearly looking down on one of Janus' poles -- I'm pretty sure it's the south pole -- so we're looking down onto the rotation. If you look carefully, at the lower edge of the disk, you can see the shadows creeping across the floor of one large crater at the day-night boundary as Janus rotates. At the same time, at the upper edge of the disk, you can see another largish crater floor come into the sunlight; if you were standing in that crater, it'd be sunrise on another 17-hour day on Janus.

The seven images in this animation of Saturn's moon Janus were captured by the Cassini orbiter as it passed within 200,000 kilometers of the moon on February 21, 2008. The view is down onto Janus' south pole, and during the time that separates the seven images, Janus rotates by several degrees, sending some craters into darkness and bringing others into daylight.