Walk with me down one of the Padua Chasmata and we'll pass through the craters Amastryus, Pagasus, and Tereus along the way. The International Astronomical Union (IAU) has recently given its blessing to a host of new names for features on Saturn's moon Dione, a formal (and late-arriving) indication that Cassini has improved enough on Voyager's maps of the moon that new names are required to describe its features.

Here's a map of Dione, assembled from a variety of sources by Steve Albers, with the feature names mapped onto it by Jason Perry. The IAU decreed long ago that Dione's features shall be named for people and places from the Aeneid of Virgil. Sorry it's not too legible at this resolution -- you need to download the full 1.3 MB version to read well. 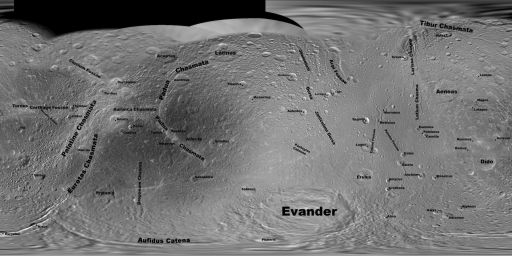 On March 17, 2008, the International Astronomical Union approved a number of new names for features across Dione.
The craters are obvious, but what are all these other things -- chasmata, catena, fossae, and dorsa? Here are the definitions, which are available from the United States Geologic Survey's Gazetteer of Planetary Nomenclature, one of my favorite reference websites.Those are the features that can be found on Dione; the full list of planetary feature types is here. Clearly there is some level of subjectivity when it comes to deciding whether a feature has dramatic enough topography to be called a "chasma" or whether it's just a "fossa."

As of 1982, when the Voyager maps were drawn, only 25 craters and four chasmata had received names, and three bright streaks in Dione's leading hemisphere "wispy terrain" were tentatively lamed as "linea," a vague identifier meaning "a dark or bright elongate marking." Those three "linea" names have been dropped, now that better pictures are available to identify them for sure as chasma or fossae, two crater designations have shifted slightly, and 45 new feature names were approved. Here's the full list, with their origins.

hile researching this entry I made the happy discovery that the Gazetteer has a news page -- this must have existed for a long time, but I hadn't noticed it until now. In addition to this news about Dione, there's some other significant stuff in the Saturn system. They have decided that a spot in Dilmin, northwest of the Shangri-La region in which Huygens landed, can now be identified as a crater, "Selk." And they approved back in September a number of names for small lakes near Titan's north pole.You might ask why they didn't give names to what are obviously much larger lakes on the same map. I don't know for sure, but I am guessing it is because it is not clear how many lakes those huge black spots represent. Depending on what lies in the still-unmapped area, we could be looking at two or three or five different lakes -- so naming them will have to wait for better maps.

Finally, they've officially renamed "Encke Division" to "Encke Gap" in order to make definitions more consistent (a usage I've been following for a while), and have named the division between the A and F rings (where Prometheus and Atlas orbit) the Roche Division. What's a division and what's a gap? According to this page, "Divisions are the separations between named rings, and gaps are the spaces within named rings. In general, divisions are large, gaps are small." And they've changed the spellings for a couple of the outer, irregular moons. Looks like I have a lot of editing to do on my Saturn pages!