This is just for fun: I don't have time to do justice to Cassini's flyby of Enceladus this week, but I just can't keep my hands off those images. Here's an animation of some of the photos Cassini took as it flew by, including a dozen or so from the period when Enceladus was in eclipse (click here for more description on what's going on in those pictures).

On March 12, 2008 Cassini flew within 50 kilometers (30 miles) of Saturn's geyser moon Enceladus. Cassini approached from above Enceladus' north pole, seeing the moon as a crescent. As Cassini departed, Enceladus entered Saturn's shadow, so long exposures were required to see Enceladus' surface by light reflected from Saturn's rings to Saturn and then to the moon. As a result of the long exposures, stars streak the backgrounds of these images, and some of the closest images are blurred as Enceladus shrank in the viewfinder while the shutter was open. The 11 approach images were taken with the narrow-angle camera; the 14 departure images were taken with the wide-angle camera.
I like how you can watch the star field shift back and forth as Cassini's camera tracks Enceladus. (I did shift a couple of the frames a little to make Enceladus jump around a little less in the field of view.) In the last two frames, Enceladus came out of eclipse (I think), so the stars disappeared.

Also, I should point out that in an unusually quick turnaround, the ISS team has released their official version of the lovely three-frame mosaic of Enceladus' northern hemisphere, the best-quality images they received during the flyby. 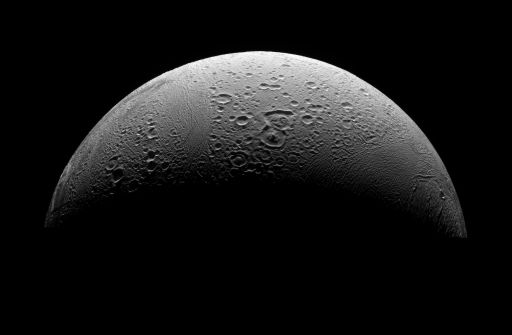 As Cassini dove in toward its closest-ever flyby of Enceladus, it captured this three-frame view onto the north pole. Enceladus' north pole is much more heavily cratered than its south pole. But the craters, especially the larger ones, have been modified by subsequent geologic activity, with their centers doming upward; they are also criscrossed by linear tectonic features called "fossae" and "sulci." The two overlapping large craters near the center of the image are triangular Ali Baba and more circular Aladdin, located at 60 degrees north latitude; they form a line pointing to the north pole. To their left is a heavily tectonized region known as Samarkand sulci. Above the two craters (toward the equator) stretches the bright, narrow trough of Isbanir fossa. The area to the right of the two craters, which also contains some prominent sulci, was not imaged by Voyager so had not yet received names at the time that these images were taken.