It seems there is a lot of public interest in yesterday's flyby of Enceladus by Cassini because I am finding the Cassini website to be almost impossibly sluggish this morning! Still, "too much interest" is exactly the kind of problem I want to see on space missions. With a little help from some folks at unmannedspaceflight.com I can show you a couple of teaser images.

This first one is really amazing. It's not the best quality image of Enceladus ever taken, but you should be astounded when I tell you that nothing in this photo is illuminated directly by the Sun. At the time that this image was taken, Enceladus was sitting in Saturn's shadow -- in other words, Saturn was eclipsing the Sun. But Enceladus' surface is well lit (at least to the very sensitive eye of Cassini's wide-angle camera) by four light sources. I'll explain below. 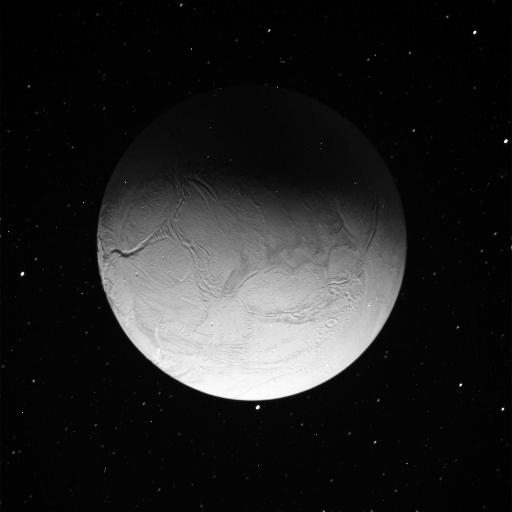 This view of Saturn's moon Enceladus was captured by Cassini as it sped away from its closest-ever encounter with the moon. At the time, Enceladus was in Saturn's shadow, so it received no direct illumination from the Sun. All the illumination here is by light reflected from various other objects. 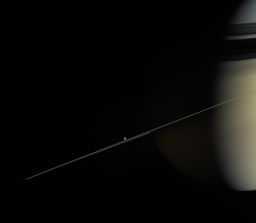 Saturn and Dione, with ringshine

I dug this image out of the Planetary Data System to show you what ringshine looks like. Cassini looked edge-on to Saturn's rings to capture this approximately true color view of icy white Dione and the globe of Saturn on November 21, 2005. The rings are so thin that they almost disappear, but their effect is visible in the wash of yellow light they reflect onto the night side of Saturn's southern hemisphere (below the rings in this image). The north side of the rings is the unlit side, so there is no ringshine visible on the night side of Saturn's northern hemisphere.
The main light source is Saturn. Of course, if Saturn is eclipsing the Sun, shouldn't Enceladus be seeing only its night side? Yes. But Saturn's night side receives quite a lot of light reflected by the Sun-facing disk of the rings -- so, if I have my geometry right, we are seeing light here that first hit Saturn's rings, bounced off Saturn's southern hemisphere, and thence to Enceladus. With each reflection, a fraction of the light gets absorbed, yet Enceladus is still very well lit. That's a testament both to the relative brightness of Saturn's rings and cloud tops and Enceladus' surface and also to the aforementioned sensitivity of Cassini's camera.

In the region above the area illuminated by Saturnshine and ringshine, you can see both the left and right limbs are also illuminated, but much more faintly. The left side is illuminated by Rhea, more than 700,000 kilometers away (and itself only a crescent). The right side receives light from Tethys and Dione, 100,000 and 200,000 kilometers away, respectively. There's light bouncing all over the Saturn system! Here's a sketch map of what I'm talking about. I almost certainly have the "crescents" representing illumination from the moons incorrectly oriented, so take this map with a grain of salt. 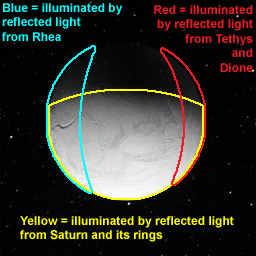 The other teaser I have for you is this, which I think represents the highest-resolution images planned for the flyby. We're looking down onto the north pole. A little more than half of the region in this mosaic was well-imaged by Voyager, so many of the visible features have received lovely names from the Arabian Nights. This area has not been seen at very high resolution by Cassini, however, so the science team was excited to be capturing these images.

As Cassini dove in toward its closest-ever flyby of Enceladus, it captured this three-frame view onto the north pole. Enceladus' north pole is much more heavily cratered than its south pole. But the craters, especially the larger ones, have been modified by subsequent geologic activity, with their centers doming upward; they are also criscrossed by linear tectonic features called "fossae" and "sulci." The two overlapping large craters near the center of the image are triangular Ali Baba and more circular Aladdin, located at 60 degrees north latitude; they form a line pointing to the north pole. Above them is a heavily tectonized region known as Samarkand sulci. To the two craters' right (toward the equator) stretches the bright, narrow trough of Isbanir fossa. The area below the two craters, which also contains some prominent sulci, was not imaged by Voyager so had not yet received names at the time that these images were taken.
When public interest wanes enough that I can get a better response from the Cassini raw images website I'll post some more about this flyby.