Sisters Are Doin' It for Themselves

I've been fortunate to grow up and be educated in environments where I never felt I experienced any particular prejudice because of my gender. Still, there's no question that there's more men than women involved in space exploration. So I was astonished to discover that it was even possible for the entire Mars Exploration Rover tactical operations team to be female; but a week ago, on Friday, February 22, every last person involved in operating the rovers for that day was a woman. 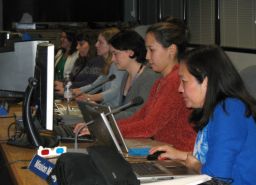 Del.icio.us - Newsvine - NowPublic
Think about that. One, two, or a handful of women around could be explained away by the chauvinistic as token participants, the product of affirmative action. But the entire tactical team, from top to bottom -- there's no way to dismiss that; these women all have the skills to do the work, work they do every day, keeping Spirit and Opportunity alive and active a hundred million kilometers away. The Jet Propulsion Laboratory sure has changed a lot from the days when women were only in secretarial positions, and competed in an annual beauty pageant called "Miss Guided Missile" (see M. G. Lord's Astroturf for more on that story). My only experience with JPL has been since 2003, and it's certainly now a diverse workforce by any dimension. Still, I was surprised that the rovers' tactical operations team could be mustered with only women. It turns out it wasn't at all hard to do, and has almost been done by accident several times in the past.

What's a tactical operations team? Unlike orbiter missions, for which planning and programming are usually completed months in advance, the rovers need new and unique operations plans developed for each sol (Martian day) of the mission, depending on what has happened the previous sol. This requires a fairly large tactical operations team consisting of both scientists and engineers. The science team includes a Science Operations Working Group that determines what kinds of observations the rovers should perform each sol, and make sure they fit in with the long-term science goals for the mission. The scientists are supported by specialists for each of the rover's instruments -- Downlink Leads, who monitor the instrument's health and see if the data is all there or if anything has been lost or garbled, and Uplink Leads, who focus on the instructions being delivered to each instrument.

On the engineering side, there are Sequence Engineers, who develop the lists of commands that operate the instruments, and Rover Planners, who design the details of drives or arm movements and make sure they are safe for the rover to execute. There are also systems engineers making sure there are no conflicts over important resources like power and memory, and other staff who focus on the health and status of each of the rovers' systems -- power, communications, etc. Frequently, one or more of these people is shadowed by a junior staffer undergoing training to take on the position in the future. All told, there may be around 30 people on the tactical operations team on any given day. (If you're curious about how all this works, here's an article about it: "From Prime to Extended Mission: Evolution of the MER Tactical Uplink Process.")

On Friday, all these people, all the scientists and engineers, were women. It wasn't quite an accident; it did take a bit of planning. But there have been previous days where all but one or two of the members of the team were female, so it was very easy to put the all-female team together. In fact, what was hard was figuring out who got to serve -- apparently there were half a dozen eligible Tactical Activity Planners, for instance.

There have always been plenty of women around on the Mars Exploration Rover mission. But there are lots more than there used to be, in part because the Mars Exploration Rovers have lasted so danged long. In the beginning of the mission, the rovers were being driven by the people who originally designed and developed the hardware and software. The kinds of people who excel at designing and building space-traveling robots under huge time and budget pressures find the regular schedule of everyday operations on Mars to be, well, less thrilling than designing and building the next Mars mission. So they have moved on.

So, since the end of the primary mission, the engineering side of the rover staff has almost entirely turned over to new personnel. The new people get a kick out of driving a rover on Mars while also being sure that, on most days, they can clock in at eight and out at five. On the science side of things, after the long-awaited landings, the thrill of exploring Meridiani and Gusev quickly gave way to fatigue and a nagging worry that all this time spent operating the rovers is time taken away from research. Even in the earliest weeks of the mission, young Ph.D.'s and even graduate students were being thrust into the tactical science positions so that their more senior advisors could spend a little less of their time worrying about day-to-day operations and a little more time analyzing the data being returned to Earth. The four years of operations to date have seen many of these students grow up, win their degrees, find permanent positions, and get replaced by fresh faces.

The steady turnover of staff, among both the scientists and engineers, has opened up opportunities for people, especially young people, to step in to these tactical positions -- people who weren't involved in the long process of getting the rovers to Mars, but who are smart and energetic and ready to take on the challenge (and, it must be admitted, occasional tedium) of the routine operations of a long-lived mission to the surface of another planet. And these people are much more likely to be female than they used to be, because more and more women are completing science and engineering degrees.

I knew that, of course, but I still always assume that there's more men than women involved on any space mission; so, again, it amazes me that it was even possible for there to be an all-female tactical operations team. Time for me to take a look at my prejudgments!

Here's a photo taken on Friday of just the team members who were present at JPL. Many more among the science side of the team were participating remotely, at academic institutions across the country. 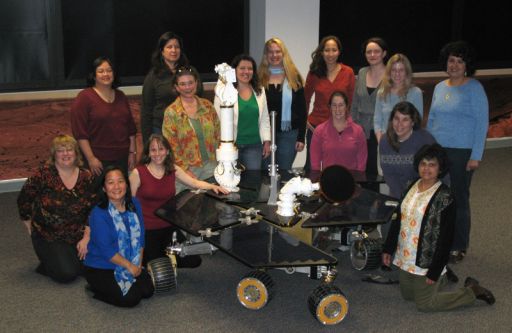 On February 22, 2008, the entire tactical operations team for the Mars Exploration Rover mission, both onsite at JPL and offsite at remote institutions, was female. Standing left to right: Jennifer Herman, Cindy Alarcon-Rivera, Brenda Franklin, Caroline Chouinard, Sharon Laubach, Pauline Hwang, Colette Lohr, Tara Estlin, Dina ElDeeb. Sitting left to right: Diana Blaney, Cindy Oda, Ashley Stroupe, Julie Townsend, Alicia Fallacaro Vaughan, Manju Kapoor. Other tactical team members working from remote institutions were also all female.
The Mars Exploration Rover Tactical Operations Team for February 22, 2008I hear that Friday was fun -- A. J. S. Rayl has some comments from Mission Manager Cindy Oda in her monthly rover update, posted today. But was it important? I think so. Though they may pretend otherwise, children are very heavily influenced by their parents, what they see their parents doing, and the environments, stresses, and pressures their parents must deal with. And role models are very important. If the entire rover tactical ops team could be female, that means there's an awful lot of women scientists and engineers working at JPL. These women have children, nieces and nephews; they head Cub Scouts and Girl Scouts; they give public talks; they reach out to their communities in a variety of ways. It is becoming more and more likely for girls to see women in these traditionally male occupations, and less and less likely for it even to occur to a girl that there might be any barriers to her because of her gender -- or, when it comes to that, for the same idea to occur to a boy. We're one step closer to a day when it will seem absurd even to think that any individual person lacks the potential to perform well in a career because of the accident of their possessing an X or a Y chromosome. 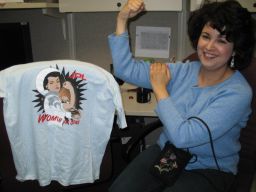 Dina ElDeeb is a systems engineer on the Mars Exploration Rover mission.