Asteroid near misses are disconcertingly common

I've been investigating some of the recent excitement about dangers from the skies, and particularly asteroid 2007 TU24, which will pass harmlessly by Earth tonight, considerably farther from Earth than the Moon. Here's some recent radar images of the near-Earth object, which is roughly 250 meters in diameter.

This low-resolution radar image of near-Earth asteroid 2007 TU24 was captured from the Goldstone radio telescope in the Mojave desert. It shows an irregularly-shaped asteroid roughly 250 meters across. TU24 will pass within 1.4 lunar distances, or 538,000 kilometers (334,000 miles), of Earth on Jan. 29 at 08:33 UTC (12:33 a.m. PST).
At 250 meters in diameter, it'd be roughly half the size of Itokawa, which was lately investigated by the Hayabusa mission.

This animation consists of 57 separate images captured by the Hayabusa spacecraft as the tiny asteroid Itokawa (535 by 294 by 209 meters in size) rotated underneath it. The images are actually from three separate rotations; they were sorted and lined up into this animation by Øyvind Guldbrandsen of the Norwegian Astronautical Society. Click here for a full-resolution movie containing 169 frames (AVI format, 3.8 MB)
That is not insignificant-sized for a near-Earth asteroid, which is what makes the close approach by TU24 so interesting. For one thing, a 250-meter-diameter object passing relatively close to Earth is a very worthwhile target for amateur and professional astronomers alike; the Goldstone radar images I posted above will be followed up by even better ones from Arecibo that they're planning on taking over the next couple of days. Also, there's the fear factor: even though I can assure you that TU24 is NOT going to hit us, it is worthwhile to stop and think about what could happen if it did. I plugged TU24's numbers into the neato Solar System Collisions tool written by Douglas Hamilton, and such an impact onto land would give you roughly a 10-kilometer crater, a bang the size of five nuclear bombs, and a magnitude 7-ish earthquake. If you want to control the impact parameters much more (and see what happens if it hit water), you can check out the Impact Effects online tool by Marcus, Melosh, and Collins.

Astronomers are more excited about TU24's size than its miss distance. It'll pass by at about 1.4 lunar distances, which is really pretty far away (the Moon is about 30 earth diameters away, so the asteroid will miss us by a distance that is 40 or 50 times our diameter -- that's pretty far). This image from MESSENGER's Earth flyby illustrates that separation: 1.4 lunar distances is not even close. 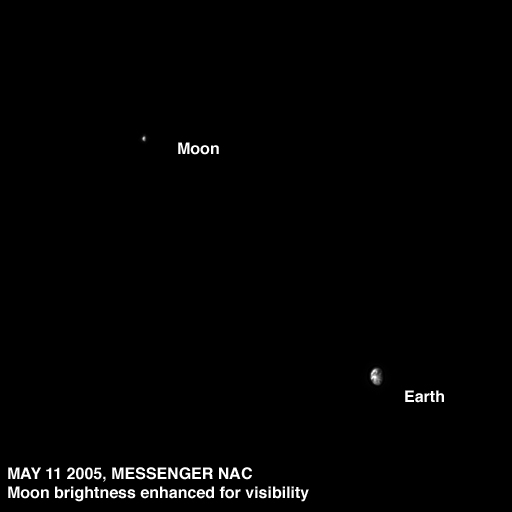 The Earth and Moon as seen by MESSENGER

This image was cropped from the MESSENGER Dual Imaging System (MDIS) full frame of the Earth and Moon captured on May 11, 2005. MESSENGER was about 29.6 million kilometers (18.4 million miles) from Earth at the time that the photo was taken, approaching its August 2 flyby.
We get buzzed much more closely by asteroids all the time. I checked the records kept by JPL's Near Earth Asteroids program, and for all of 2007, I found that there was a total of 17 objects that came closer to us than the Moon -- which is what I consider a close approach. But here's what I think is the most interesting fact about those closely approaching objects: every one of those 17 things that whizzed by us last year were also first discovered last year. Most of them would do little harm to us even if they did hit -- many are probably smaller (though they are moving faster) than the great big American spy satellite that is supposed to deorbit and crash next month. Still, it's a little bit disconcerting to know that we're essentially flying through a crowd of rocks that we can't see until they're right on top of us.