I've been waiting very impatiently to see color images from MESSENGER's Mercury flyby, and the first color image has finally been released: 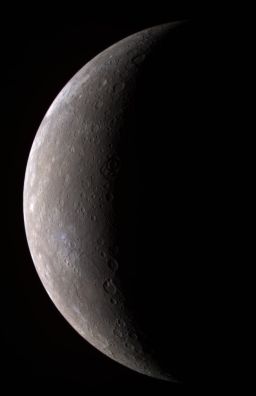 MESSENGER's wide-angle camera snapped this color shot of Mercury as it approached for its first flyby, on January 14, 2008. The image is false color, composed of three images captured through near infrared, far red, and ultraviolet filters (with wavelengths of 1000, 700, and 430 nanometers). Some relatively fresh craters are surrounded by splashes of brighter, bluer material than the generally reddish color of the Mercurian plains.
In fact, both of today's image releases from the MESSENGER team had color as their central theme. The other release was the first from the MASCS instrument, which is a spectrometer. MASCS splits the sunlight that bounces off of Mercury into hundreds of wavelengths, analyzing how bright Mercury's surface is in tiny slices of the electromagnetic spectrum only 4 nanometers wide. The products of MASCS' analysis are spectra, graphs of brightness versus wavelength. Spectroscopy is a huge sub-field of space science; little wiggles and bumps in a spectrum can tell spectroscopists volumes about what materials are present on the surface of a planet (or the atmosphere of a star). That being said, the first MASCS spectrum from Mercury (the thick black line on the right-hand side of the image below) is a little bland-looking:

This image represents some of the first data returned from MESSENGER's Mercury Atmospheric and Surface Composition Spectrometer (MASCS). As MESSENGER flew past Mercury for the first time on January 14, 2008, MASCS pointed at the ground to gather spectra from the surface.
The MASCS team has not cluttered their spectrum with any tick marks indicating wavelength -- perhaps to discourage over-interpretation of a very preliminary result -- but they have very kindly painted the background of their graph with colors indicating what wavelengths we're looking at. You can probably recognize in the bright vertical stripes a typical rainbow spectrum: violet, blue, green, yellow, orange, red. This indicates the part of the spectrum that covers visible wavelengths, about 400 nanometers to 700 nanometers, with violet being at the short-wavelength end and red being at the long-wavelength end. Shorter-wavelength than violet is ultraviolet, and longer-wavelength than red is infrared. MASCS can "see" wavelengths from 300 to 1350 nanometers.

So, is there anything we can learn from staring at that graph? The first thing to notice is that the graph slopes. It rises almost monotonically from the shortest wavelengths to the longest wavelengths. This is known as a "red" spectrum -- it's brighter in longer, redder wavelengths than in shorter, bluer wavelengths. A spectrum that sloped in the opposite direction would be thought of as "blue," and a spectrum that was pretty flat across all wavelengths would be described as "gray." (The Moon is a good example of a place that's spectrally gray.) So Mercury is "red." Reddish colors on rocky surfaces in the solar system generally indicate places that have been exposed to space weathering for some time. Fresher surfaces, like the interiors and ejecta blankets of fresh craters, tend to look gray or blue by comparison to the reddish surfaces they've punched in to. Just take another look at that global shot of Mercury above -- you can see a couple of fresh crater splashes on the surface, and they look blue.