Welcome to the 28th Carnival of space, a tour of news and views on space across the Web!

Comet Holmes was a popular topic of monologuing on the blogosphere this week. Astronomy Picture of the Day is showcasing a recent image of Comet Holmes. With a tiny tail, it's more recognizable as a comet. Astroprof explains how comet Holmes' magnitude stays roughly constant even as it is looking dimmer and dimmer to the eye. New Scientist considers the intriguing possibility that Comet Holmes has flared up because of a collision with an asteroid. Amateur astronomer and "comet collector" Stuart Atkinson reports on the view from Kendal in the Lake District. Astropixie was also looking at Comet Holmes while on an observing run at Mauna Kea in Hawaii; the clouds having prevented her from using the big telescope, she describes an unusual method of looking at the stars, through night vision goggles. 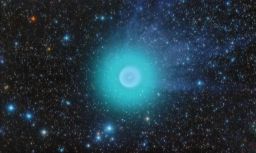 This image of comet 17P/Holmes was taken from an observing site in Spain, 2,000 meters above sea level, over the night of November 1-2, 2007. To bring out details in the inner and outer coma and much fainter tail, they combined 26 one-minute, 4 ten-minute, and 3 fifteen-minute exposures.
Fifty-five Cancri got a lot of attention too (including from me). Alan Boyle at MSNBC's Cosmic Log reviews the news of a 5th planet orbiting the nearby star 55 Cancri, a planet in the habitable zone of its parent star. FlyingSinger connects this exciting discovery with a science fiction novel he read early this year about interstellar colonization. The fictional colonists' new home is called Coyote, an Earth-like moon orbiting a Saturn-like planet of a not-too-distant star not unlike 55 Cancri.

A number of bloggers have been thinking about issues in the private side of space. The Space Cynics look at the space "industry" and its parallels with the development of international manufacturing, production and offshoring. Mark R. Whittington responded to an Op Ed in the British newspaper The Guardian, arguing that there is no reason to attempt to preserve the lunar surface as "pristine." Clark Lindsey at Hobby Space pulls together news of a collaboration between Bigelow Aerospace and Space Florida to create a new space exploration fund. In a piece he wrote for the Globe and Mail (a Canadian newspaper), James Watt details some Canadian participants in the 2007 Space Elevator Games. Advancednano reports from the 2007 Technology Prize Competitions that robotics work great and are improving quickly.

nd then a bunch of people sent in submissions that I'm having a hard time putting into neat little cubbyholes. The Bad Astronomer got very excited about a Hubble image he called "Spiraling tentacles of galactic doom!" Steinn Sigurdsson, at the Dynamics of Cats, details the changes that NASA is making to its accounting system. It's a blog post in two parts: part 1, part 2. Paul Gilster at Centauri Dreams studies James Bickford's recent report to NASA's Institute for Advanced Concepts (which just closed in August) on how we might 'harvest' antimatter that is produced naturally in the Solar System, using it for space applications that could make interstellar precursor missions possible. Spacefiles tried to unearth some information about VESTA, a planned multiple asteroid flyby mission, that was to succeed Phobos-1 & 2.

Want to build your own space station-saving cufflinks, like the ones used to repair the International Space Station's torn solar array? collectSPACE shows you how. Pamela Gay reported from the annual meeting for the American Association of Variable Star Observers, highlighting a presentation made by Jordan Raddick about "Astrodemocracy" in astronomical research. Universe Today reports that NASA has unveiled a new mockup for its Orion crew module. This life-sized model of the capsule will help engineers make sure they can cram everything into the relatively small spacecraft. A Babe in the Universe looks at the Kaguya HD movie from the Moon as well as Germany's plans for a future lunar probe. And, finally, Colony Worlds asks you to consider ice mining, which may, one day, be the most profitable job in the solar system.

Want to be a part of next week's Carnival? Here are the instructions for submission.