Monday afternoon John Spencer gave a lengthy talk about the New Horizons encounter with Jupiter. I've posted extensively on this in the past: approaching Jupiter; Jupiter rotating; full frame on Jupiter; Jupiter cloud motion; Io erupting; Alice's view; retreating view of Io and Europa; early science results; Europa images; Tvashtar movie; etc, etc, etc. And in fact John Spencer posted here too, about approaching Jupiter and Io's eruptions. So I'll try to keep to things that were new to me.

John went over New Horizons' trajectory to Pluto, and mentioned that during the long cruise they will actually be doing a little bit of science on Uranus and Neptune. New Horizons will be way too far away to resolve either planet, but will be able to measure each planet's brightness at a variety of phase angles. From Earth, we pretty much only see Uranus and Neptune almost fully lit by the Sun (that is, from very low phase angles); New Horizons will get much higher phase views.

He mentioned that the goals for the Jupiter encounter were fourfold. First in importance was the gravity assist; second was for the science team to undergo a stress test ("at this," John remarked, "we were very successful.") Third was to calibrate the instruments; science came in last, but they still managed to accomplish a lot.

He showed some images from the Ralph MVIC multispectral imager that I hadn't seen before. Ralph could not be used much at Jupiter because it was too sensitive for the bright lighting conditions there; the detectors would be totally saturated, even with the shortest possible exposures. But there was an exception: one of the filters is a narrow-band one in a wavelength in which methane strongly absorbs light. Because Jupiter has a lot of methane in its atmosphere, and methane absorbs so much of the light, Ralph was able to capture a 3,000-pixel portrait of Jupiter in this methane band. Turns out the images was released on the mission website in May; I just hadn't noticed it before. Here it is in all its glory. 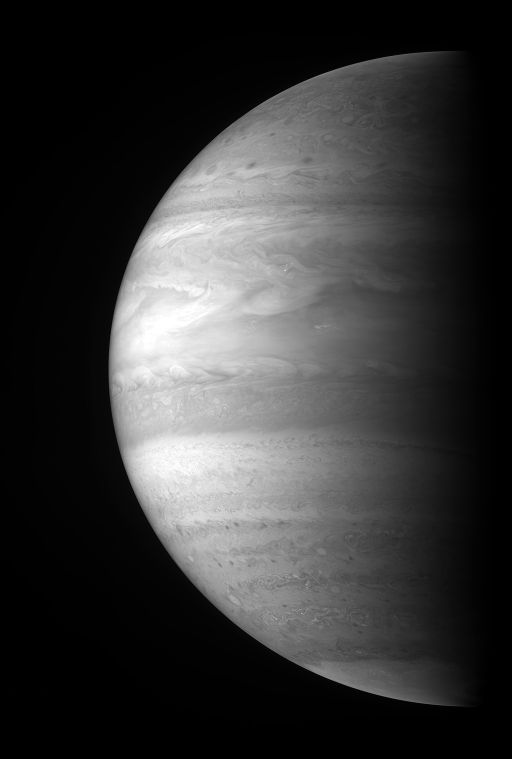 New Horizons view of Jupiter in a methane band

New Horizons captured this incredibly detailed view of Jupiter's high-altitude, methane-rich clouds on Febriary 28, 2007, near the spacecraft's closest approach. The image was taken at a near-infrared wavelength of 890 nanometers. This wavelength of light that is strongly absorbed by methane gas.

The image reveals a range of diverse features. The south pole is capped with a haze of small particles probably created by the precipitation of charged particles into the polar regions during auroral activity. Just north of the cap is a well-formed anticyclonic vortex with rising white thunderheads at its core. Slightly north of the vortex are the tendrils of some rather disorganized storms and more pinpoint-like thunderheads. The dark "measles" that appear a bit farther north are actually cloud-free regions where light is completely absorbed by the methane gas and essentially disappears from view. The wind action considerably picks up in the equatorial regions where giant plumes are stretched into a long wave pattern. Proceeding north of the equator, cirrus-like clouds are shredded by winds reaching speeds of up to 180 meters per second (400 miles per hour), and more pinpoint-like thunderheads are visible. Although some of the famous belt-and-zone structure of Jupiter's atmosphere is washed out when viewed at this wavelength, the relatively thin North Temperate Belt shows up quite nicely, as does a series of waves just north of the belt. The north polar region of Jupiter in this image has a mottled appearance, and the scene is not as dynamic as the equatorial and south polar regions. The amazing images of Io's erupting plume Tvashtar have been extensively discussed here already. John pointed out something about them that I hadn't appreciated before. First, here's the picture under discussion: 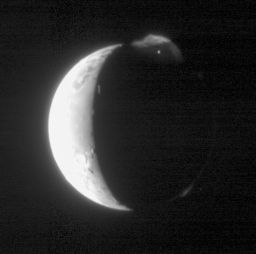 New Horizons captured this view of a crescent Io on March 1, 2007, 19 hours after its losest approach to Jupiter. The dayside is deliberately overexposed to bring out faint details in the plumes and on the moon's night side. The plume erupting 330 kilometers from the top of the globe is from the volcano Tvashtar. The plume is lit both by sunlight and by Jupitershine. Beneath the plume is the incandescent glow of hot lava.
One thing scientists are interested in is: what's the size of the individual grains that are falling out of the Tvashtar plume? To get at grain size of dust and ice particles, the best thing to do is to view the dust and ice when they are back-lit (lit at high phase angles approaching 180 degrees). Now, New Horizons' instruments are way too sensitive for them to risk pointing at angles that are so close to the Sun, and anyway they didn't know the plume would be there when they planned the spacecraft observations. But look closely at that image. The top part of the plume is Sunlit at a reasonably high phase angle of roughly 120 degrees or so. But the bottom part of the plume, in Io's shadow, is backlit by reflected Jupitershine at a phase angle of 176 degrees -- nearly perfect for those grain size studies. John didn't have any conclusions from those studies to report yet, but was excited about the luck of the lighting geometry.

He discussed the cool Io eclipse images too: 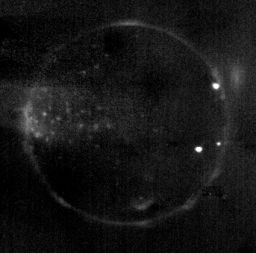 As New Horizons sailed past Jupiter on February 27, 2007, it watched Io pass in to Jupiter's shadow. Without the Sun illuminating the surface, New Horizons could keep its shutter open for a very long time, capturing the glow of hot spots and aurorae on Io's surface and atmosphere. The three brightest spots are from the incandescent glow of hot lava erupting from volcanoes: Pele and Reiden (south of the equator), and a previously unknown volcano near 22°N, 233°W. The disk is outlined by an auroral glow, produced by the interaction of Europa's thin atmosphere with the intense magnetic field of Jupiter. A spot at 2 o'clock is a cloud of atmosphere that is somehow levitating 330 kilometers above the surface. On the left side of the disk is a spotty region on the side of Io that faces Jupiter.
He compared the eclipse view to a Sunlit view with the same geometry (sorry, I don't have that one to show). He said, that every bright spot in the eclipse image corresponds to a dark spot in the visible-light image. All the dark spots glow at night -- but only around the sub-Jupiter point. On the other hand, there is very little correlation between the eclipse image and the hot spots seen in thermal infrared wavelengths, so "whatever is going on at the sub-Jupiter point is non-thermal," a remark that brought an interested "huh" sound from the audience. He also pointed out that the sub-Jupiter glows are produced in areas smaller than 30 kilometers across, so whatever process is making that glow has to be happening pretty close to the surface. He hypothesized that the gas being emitted by volcanoes (something volcanoes do even when they aren't erupting) is glowing near the surface; somehow, Jupiter's magnetospheric effects are penetrating that far down into Io's charged atmosphere.

In this amazing animation from the New Horizons flyby of Jupiter, the 300-kilometer-high plume erupting from Io's Tvashtar volcano is visibly in motion, its fountains of lava spraying up, out, and back down to the Ionian surface. New Horizons captured the motion fortuitously; the images were part of an observation of the ring system designed to search for structures in the rings, and because Io was close by the science team planned the ring images to encompass Io in the same frame. The animation contains five images taken over an eight-minute span of time beginning at 23:50 UT on March 1, 2007.
John pointed out that while they could see the stuff in the plume falling down to the surface, none of the images showed anything in the plume moving upward. "This is a good indication that particles are condensing out of the plume" -- that is, the plume starts out gaseous and condenses solid particles (presumably, as the temperature falls). Also, if you try to track individual plume features, he notes that the trajectories do not appear to be ballistic. Instead plume material is sliding down the sides of the plume structure. "Lots of hydrodynamic effects going on here."

He noted that all of their temperature measurements indicated that the lavas were likely of ordinary basaltic composition; they see no evidence for higher temperatures requiring exotic lava compositions.

Commenting on the satellite search, he said "We did not find any satellites that we believe yet, down to 1 kilometer in size. But we found something more interesting. We found two ring clumps confined to a narrow bright arc. At first Mark Showalter thought these were collisional remnants from a recent collision, but we do not see them brightening at high phase angle" as they would expect from a collision, which would have produced dust. "So they may be confined arcs like at Neptune or in Cassini's G ring, related to orbital resonances with Metis." 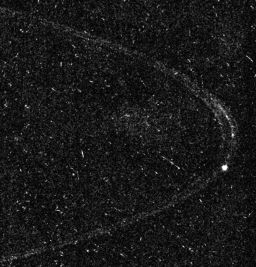 One of the surprising discoveries from New Horizons' encounter with Jupiter was three clumps in the main rings following the tiny moon Adrastea (16 kilometers in diameter). The discovery of the clumps was made by Mark Showalter, who had designed the imaging sequence to search for previously undiscovered moons in the rings.
He closed his talk by showing some of the pretty pictures from the encounter, whose targeting was suggested by members of the public via unmannedspaceflight.com. This was his last image: 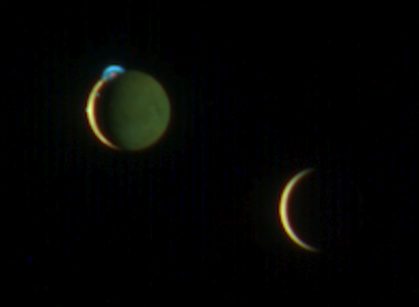 Io and Europa shone as jewel-toned crescents to the MVIC imaging spectrometer on New Horizons as the spacecraft sped away from Jupiter at 10:34 UT on March 2, 2007. Europa appears to be the larger of the two, but that's an optical illusion because of their different distances from the spacecraft: larger Io (3,630 kilometers in diameter) is 4.6 million kilometers from New Horizons, while smaller Europa (3,122 kilometers in diameter) is closer at 3.8 million kilometers away. When this image was taken, Io was on the far side of Jupiter from New Horizons, while Europa was closer to Jupiter than New Horizons. Being on the far side of Jupiter, Io's night side is lit by sunlight reflected off of Jupiter's cloud tops. Europa's night side is not, because the side of Europa that is receiving reflected light from Jupiter is the side that is facing away from New Horizons.
With this image on the screen, he remarked, "now which of these satellites is the one you would fly a mission to?" This brought a laugh from the audience. Io is not one of the four targets being considered for the next flagship mission, but it would be an important target for either a Jupiter system orbiter or a Europa orbiter, because, as John pointed out, it's clear from New Horizons' data set that spectacular Io science is possible from quite a great distance away.