The first task I wanted to get to upon returning to work was to update my calendar of future events so that I can get an idea of what we have to look forward to over the coming months. As it turns out, there is a big event taking place tomorrow: the MESSENGER spacecraft flies by Venus for the first time. MESSENGER is on a long, looping trajectory toward Mercury that requires one Earth flyby, two Venus flybys, and three Mercury flybys before entering Mercury orbit in March 2011.

Sadly, there won't be any opportunity for any science during this flyby. To understand why, it's helpful to look at a diagram of the inner solar system: 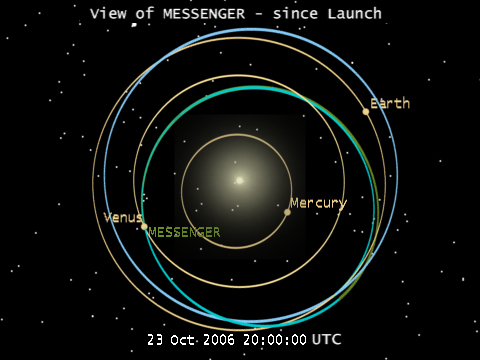 On October 23, MESSENGER approached Venus for its first flyby.

(You can pull diagrams like this one daily from the Where is MESSENGER? website.) As you can see from the diagram, Venus is almost exactly on the opposite side of the Sun from Earth. This geometry is known as conjunction, and when it happens, a spacecraft at Venus can't readily communicate with Earth for a few weeks. Coincidentally, Mars is also in solar conjunction right now. Anyway, the MESSENGER mission planners want to be very sure they get the flyby to work perfectly, and doing the first Venus flyby during conjunction is risky enough already without adding more risk by trying to operate the spacecraft for science at the same time. They'll have a second chance for Venus science at the next flyby, scheduled for next June.

However, Brad Thomson did remark last week after witnessing a MESSENGER press conference that MESSENGER mission P.I. Sean Solomon might possibly have a little bit of something planned for this flyby. I can understand why they might not want to talk about this beforehand, but I'll be watching the website after the flyby is (I hope) successfully completed to see if they managed to get tricky!