A couple of neat artist's conceptions of ExoMars

With the Aurora program under way, the next European mission to Mars will be a rover named ExoMars, to be launched in 2011. (It should be the fourth mobile mission to Mars' surface after Spirit, Opportunity, and the 2009 Mars Science Laboratory.) I was just tipped off to these artist's conceptions of the rover on the ESA website, and I thought they looked pretty cool, at least in part because of the Mars Exploration Rover imagery that gives the background Mars landscape verisimilitude. 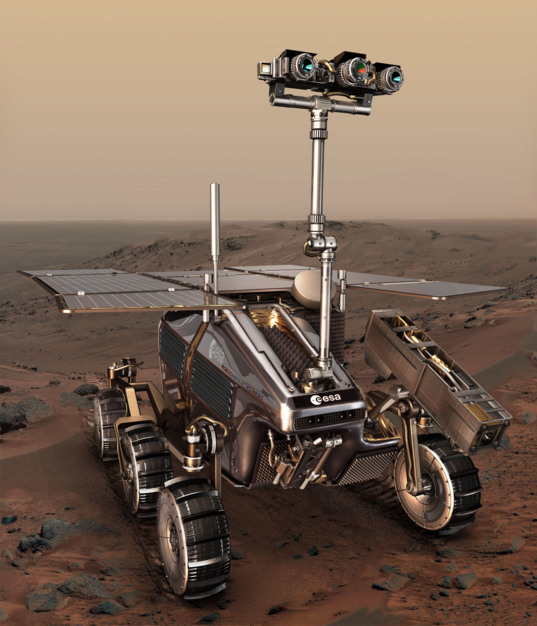 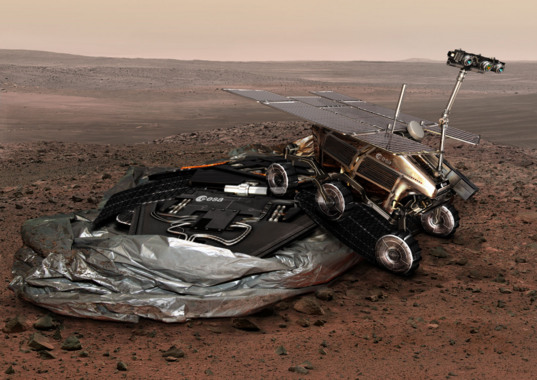 The second image has one accuracy problem -- it was pointed out that an airbag-assisted bounce-and-roll landing is not likely to end with your lander sitting on the top of a hill! But it makes for a lovely landscape shot. I'm willing to give the artists some license in order to make a pretty picture.

Taking a closer look at the rover, it's interesting that there are three large camera lenses at the top of the mast, compared to the Mars Exploration Rovers' four. It looks as though the two on the outside, with same-colored optics, are for stereo imaging; the center one must be multispectral. It's also interesting that the mast is jointed. And it looks so skinny compared to the MERs'. What looks like a shoulder-mounted weapon of some sort is actually a drill, something that Mars rover engineers have been wanting to send to Mars for a long time. They want to drill into a rock, extract a fresh, unweathered sample, and then return it to some instrument inside the rover that can submit it to various chemical tests.

Looking forward to it.