Europe Prepares to Return to Venus

After a 2-week delay in its schedule, the European Space Agency's Venus Express spacecraft is back on track for launch.  According to Manfred Warhaut, Flight Operation Director for Venus Express, the new working launch date is November 9 at 03:33 UTC (November 8 at 19:33, PST), although that has not been officially confirmed by ESA management.

Originally scheduled for launch on October 26, Venus Express suffered a minor setback when fragments of insulating material from the upper Fregat stage of the launch vehicle were discovered within the rocket's payload fairing, contaminating the surfaces of the spacecraft.  In order to remove the particles, the spacecraft and Fregat stage had to be removed from the Soyuz rocket and transported to another building at the Baikonur launch facility.  The problem has been fixed, Warhaut reported.  "Venus Express, together with its Fregat upper stage, has again been encapsulated in the fairing of the Soyuz.  It is now being transported over to the Soyuz building to become mated with the rocket." 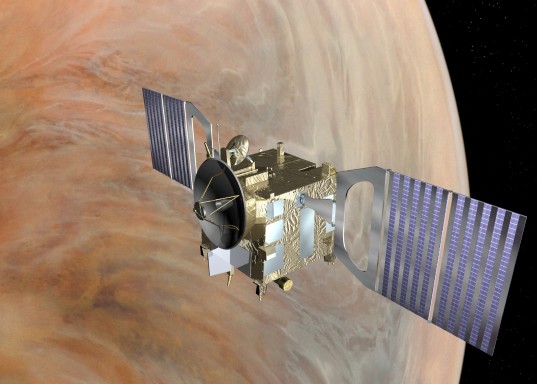 Soyuz-Fregat launches are some of the most reliable in the space business, with 1,700 launches since 1958, Warhaut said.  Venus Express' journey will begin with the three-stage firing of the Soyuz rocket; the last Soyuz stage separates approximately 9 minutes after launch.  The Fregat stage will fire twice, once approximately 10 minutes after launch, and then again at an hour and 22 minutes following launch, leading up to the separation of the spacecraft and the Fregat at an hour and 36 minutes.

At this moment, "Venus Express has already traveled almost once around the globe, and it is then heading out towards the trajectory on to Venus," Warhaut said.  Once the launch has succeeded, the next phase of the Venus Express mission begins immediately.  "Now the Venus Express spacecraft must properly initialize its onboard systems.  This is supposed to happen automatically.  Most notably it must switch on its onboard transmitter.  Secondly, it has to prime the reaction control system, to give it maneuvering capability.  Thirdly, it has to deploy the solar arrays to give us power to recharge our batteries."

All of this takes place very quickly after separation from the Fregat upper stage.  "If we are very lucky," Warhaut said, "we would receive our first signal roughly 1 hour and 56 minutes after launch.  It may happen, though, that our attitude is not favorable, because we have two low-gain antennas," only one of which would be pointing in the proper direction to communicate with Earth.  "Depending on what our attitude is, we may have to swap [antennas], and then it would take another 10 minutes more.  So the word is to the team, if we don't make it at 1:56:30, don't panic, it can take another 10 minutes at least.  But then we should have telemetry, and we should also see the solar array deployment already taking place."

The trip to Venus will require a small trajectory correction maneuver, Warhaut said.  A test maneuver will be performed at 27 hours after launch to make sure that the spacecraft engines are performing properly, and then the full maneuver will be performed at 51 hours following launch.  From that point, Venus Express will be on course for a quick 5-month trip to Venus.  A November 9 launch would give a Venus arrival date of April 11, 2006.

Arrival at Venus will require a much larger maneuver.  "We arrive at Venus with a relative velocity of about 4.7 kilometers per second [10,500 miles per hour]," Warhaut said.  "We have to use, I think, 80 percent of our onboard fuel to perform the Venus orbit insertion braking maneuver."

Initially, Venus Express' orbit will be a very long ellipse, with a near-polar inclination.  At its closest approach to the planet, it will dive to within 250 kilometers (155 miles) of the surface at 80 degrees north latitude, and then it will soar to an apocenter of 300,000 kilometers (190,000 miles) over Venus' south pole.  Over the first 3 weeks of the mission, the apocenter altitude will be lowered to 66,000 kilometers (41,000 miles).  "This will give us a 24-hour orbit around Venus.  Roughly 90 minutes of the orbit would be very close to the northern latitudes and would be devoted to most of the instrument data-taking.  But we will also have some limb observations and some observations from apocenter."  Warhaut added that the elliptical orbit will permit investigations of Venus' magnetic field and how it interacts with the solar wind.

Although the prime science on Venus Express will not begin until the 24-hour orbit has been achieved, Warhaut reported that they are prepared to take advantage of earlier opportunities.  "Scientists are very keen to make very early measurements.  Taking into account the experience we had on Mars Express, we have allocated two windows” of time for scientific observations during the initial three weeks.  "The two windows are maybe a day after orbit insertion and roughly 3 days later.  These windows are chosen so that they can make some measurements of Venus from very great distance, because they will never again be so far away as 300,000 kilometers [190,000 miles].  On a best effort basis, commensurate with the health of the spacecraft, we will try hard to do these quick scientific measurements, and they [the science team] are very happy about this."

Mostly, though, the Europeans are happy for the opportunity to be going to Venus.  "We believe this instrumentation set will significantly enhance our capabilities at Venus compared to the most recent mission," namely, NASA's Magellan.  Magellan provided stunning radar images of Venus' surface, but was not designed to answer the many questions that exist about the densest atmosphere of any of the terrestrial planets.  Just as Cassini-Huygens has been doing at Titan, Venus Express will be able to probe the full depth of the atmosphere and study every aspect, from its temperature to its composition and its wind structure and how all of these things change with latitude, longitude, altitude, and time.  "We are looking forward to it!" Warhaut said.

Everyone at The Planetary Society wishes ESA and their international partners the best of luck on the launch of Venus Express!