With the latest piece of the puzzle just published in a scientific journal, a solar system mystery that has perplexed people for more than 20 years has been solved, truly thanks to the support of Planetary Society members. That mystery is the “Pioneer Anomaly,” an anomalous acceleration that affected the two Pioneer spacecraft as they left the solar system.

Pioneers 10 and 11 were launched in the early 1970’s. As they traveled away from the Sun, they slowed down. Most of this slowing was expected, a result of the gravitational pull of the Sun and other massive objects in the solar system. But even when everything in the solar system whose mass could have any effect on the Pioneers was accounted for, both spacecraft were found to be slowing more than expected. The excess slowing was very tiny, but measurable.

Over the course of the past two decades, all sorts of solutions have been proposed, some of which invoked exotic “new” physics. In the end, recovery of more data and years of painstaking work have shown that no such exotic solution is necessary, but rather that anisotropic (big word for not-symmetric-in-all-directions) thermal radiation (big words for heat) can explain the mystery. This solution had already been suggested, and examination of the problem over time had made it seem increasingly likely, but only careful analyses could check whether anisitropic radiation could explain the anomaly. The latest piece of this analysis appears in a new scientific article by Slava Turyshev and colleagues.

The only way to solve this mystery was to look at much more data than had previously been available. That is where Planetary Society members stepped in. A few years ago, Slava Turyshev and his colleagues at the Jet Propulsion Laboratory were in desperate need of funding to help them do just that. With funds supplied by our members, Turyshev successfully chased down data from a number of sources. This was not an easy (or quick) task. These missions lasted for more than 30 years. Imagine all the people, computing formats, and hardcopy and electronic storage devices involved over that period, and you’ll start to get an idea of the problem. 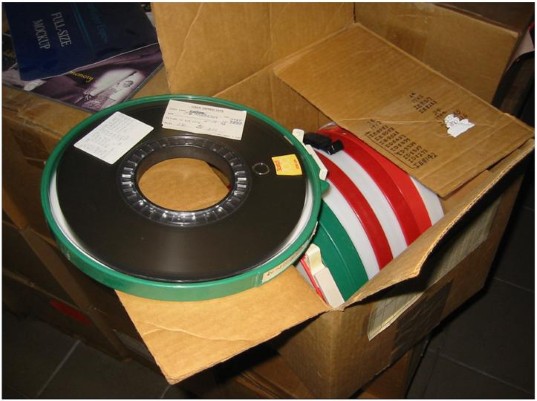 Before The Planetary Society stepped in to help, only about 11 years of Pioneer Doppler data had been analyzed, and the Pioneer anomaly remained a mystery. A lot of the remaining data (more than 19 years of it) were stored on old 7- and 9-track magnetic tapes needed to be saved and converted to modern media. By June 2006, scientists and engineers led by Slava Turyshev at the Jet Propulsion Laboratory were able to recover much of the more than 30-year navigational histories of both spacecraft.

As Slava mentioned to us before, “We recovered more data than we dared dream possible. Without the rescue of the Doppler data, we would have been blind, never able to claim the quantitative data we need to solve the anomaly. The recovery of Doppler and telemetry data and the entire effort in thermal analysis would not have happened without the Planetary Society.”

After they recovered the data, they had decades of Doppler data to analyze. That told them the true nature of the acceleration – the anomaly -- and how it acted over time including that it varied, rather than staying constant. See this discussion for more details on their Doppler results as well as more background on the Pioneer Anomaly.

To really nail down whether a thermal explanation alone could explain the anomaly required detailed thermal modeling of the spacecraft, and that is the focus of the new paper. This also could not have been accomplished without the saving of data facilitated by Planetary Society members. That process turned up spacecraft schematics used to construct the model, but also turned up data on spacecraft temperatures during the mission. The latter allowed comparison of real temperatures in a few locations with the model. 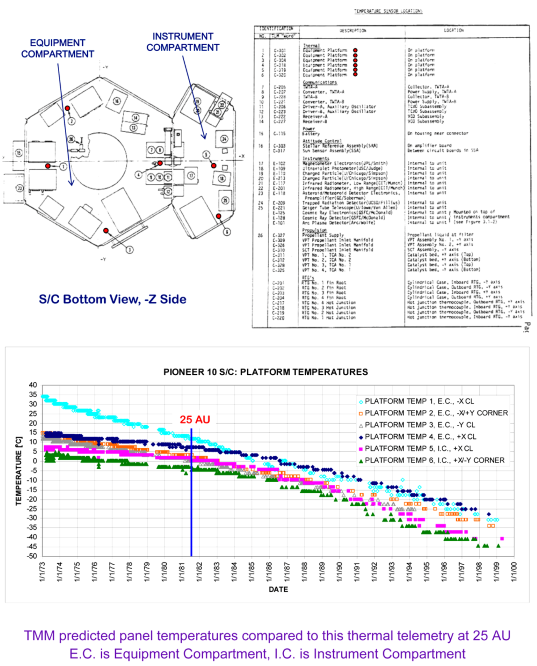 These results once emphasize three things to me: the power of more data, the power of careful scientific analysis, and the power of Planetary Society members getting involved at critical times. In addition to providing the solution to a long-term solar system mystery, the technical results of these studies will be useful for planning the details of future spacecraft navigation.

I would like to know many A.U. the spacecraft are from earth.

Such an awesome job that the Planetary Society did on the Pioneer anomaly! I think that Carl Sagan would be so pleased with everything that the Society he helped to create, has done!

Well, this might be so, but Sergei Kopeikin (from the University of Missouri) thinks he has a theoretical explanation linked to the Hubble expansion! See arXiv(gr-qc) 1207.3873 for a lengthy explanation of this expansion at the Solar System scale, and its effect on the Pioneer spacecraft...

The Turyshev study matches fairly close to the Pioneer slowing. It is 20% short..and they have outlined some large margins of error. To assume it is conclusive is premature. Additional studies need to be conducted that duplicate the results. I see some areas where they have taken liberties, such as they claim the rate of deceleration is decreasing, yet their own graph of pioneer shows the rate leveling off at 50AU and then rising at 63AU until 70AU where the study conveniently ends. This is contrary to their diminishing plutonium heat source. I believe they have data beyond 70AU. Also, the study ignores (by their own admission) the spin down anomaly. It seems unlikely that the recoil force of heat off of the antenna would affect the rate of spin. They have the spacecraft thoroughly modeled. Could they not plug in the spin down anomaly to their model? Also, an actual physical model should be built and measured in a controlled space.

Jackaxama makes some good points that merit a response. I take exception to any scientific anomaly pronounced "solved." and especially with several glaring questions or unvalidated by subsequent experimentation. I maintain my skepticism.

I figured out the correct amount by which the Pioneer spacecraft are slowing down (my figure agrees with the observations, and says the slowdown is caused by space-time's warping)**. But I don't think getting the right answer is enough in science anymore. I did 3 things which aren't scientific by today's standards. ** (warping is redefined as 2.3 times General Relativity's value - deflection of starlight by the sun is still at 1.75 arcseconds since 57% of the light is diverted into wave packets) 1) I think every scientist alive believes the Unified Field Theory or Theory of Everything will be purely mathematical, and my calculations give it a physical description, 2) it would be far more acceptable to account for the so-called "Pioneer anomaly" using established science. I let my "inner rebel" shine and introduced a radical concept like binary digits generating space-time from a 5th dimension via matter-forming wave packets produced from the interaction of gravitation and electromagnetism (both made of 1's and 0's), and another radical idea like the Mobius loop (since this universe is described by fractal geometry, quantum loops describe wave packets) being changed into the physical form of Einstein's warping of space and time, and 3) I tried to explain everything using language that a person not trained in physics or mathematics would understand. Apparently the scientific community expects the use of words, sentences, etc. that are only familiar to scientists; as well as the use of maths equations (both these things are probably intended to improve the precision of communicating ideas). Anyway, arriving at a figure that agrees with observations of the Pioneer anomaly must count for something (noboby could ever get it right purely by guessing). My article is at http://viXra.org/abs/1301.0106

Pioneer anomaly solved using just high school physics?! I doubt! What we know - (1)Pioneer 11 mass m=259kg, (2)Pioneer 11 Electric Power=155watts, (3) Efficiency for an RTG nuclear generator = 3-7%. (Source Wikipedia) In consequence, the total Thermal Energy radiated by the RTG of Pioneer 11 each second is E_tot=155Joul*100/(3-7%)=5167-2214J out of which E_radiated=E_tot-155J=5012-2059J E_radiated=p*c (where p = the radiation momentum and c = the speed of light) The conservation of momentum between Thermal Radiation and Pioneer 11 spacecraft tells that p=m*delta_v Thus, delta_v_ideal/sec=acc=E_radiated/(m*c)=2.65*10^(-8)-6.45*10^(-8) m/s^2 We can now make the supposition that only 1% of p is imbalanced, this is, there is no radiation momentum in the opposite direction to compensate for it which finally means that delta_v_real/sec=acc=1%*E_radiated/m*c=2.65*10^(-10)-6.45*10^(-10) m/s^2, a domain of values quite close to the observed 8.74±1.33×10^(−10) m/s2 unexplained acceleration toward the Sun. IN CONCLUSION, anisotropic Thermal Radiation can be at most a plausible cause of the Pioneer spacecrafts anomaly but not the definitive explanation as long as slightly modifying the imbalanced radiation momentum from 1% (hard to estimate) to a different percentage or changing the RTG efficiency can put the calculated anomalous acceleration inside the observed range 8.74±1.33×10^(−10) m/s2 or well outside it.

Hi. I have posted a comment about the Pioneer Anomaly 6 years ago and I would like you to take a look on that text. It is about coherent transponder and it may explain correctly the anomaly. If you are interested the url is: cafe.rapidus.com/remsimar/ There is an english version and a french one. Thanks for reading.

Why canvas silver? Because best reflects the color black, which it absorbs, and thus captures more energy.

Cause of the anomaly is not a one. Flat gravity based on Hubble’s law which expanded Newtonian gravity http://www.academicjournals.org/journal/IJPS/article-full-text/98D1AAE48839

" Anomaly Solved!" in a wrong ,anomaloid way-in a political way!.simply because some (bruce betts among others) belive or state it so does not make a solution. a solution,in general,may or may not be found-grow up and accept it. i think that enerybody(probably minus the hardcore apollo never happend guys-nasa is a common instrument in those sorts of problems) will agree that FINDING P10 AGAIN,receiving signals AGAIN is the proof a theory,any of them,is on solid hypothetical grounds,is reasonable enought. maybe P10 still works maybe not.

from the last radio contact DID OR DID NOT NASA tried to input into the DIRECTION POINTING ALGORITHM the acceleration (which cause is dibatable)? THE DIRECTION to point,steer the antenna AT THE SPCECRAFT results from the physical model used. the speed of the craft,the velocity of the craft are the sole measurement that can be done by radio contact.INPUT these into THE PHYSICAL MODEL,the direction algorithm and OUTPUT WHERE TO POINT THE ANTENNA.of course wrong point is no signal received.of course the ALGORITHM DOES NOT EXPECT ACCELERATION AS A INPUT-the acceleration,the anomaly was recoverd,appeared as a DISSONANCE BETWEEN MODEL AND FACT-THE RADIO DATA.

so,first nasa should attempt and POINT THE ANTENNA MORE PRECISELY THAN MERE LOBE WIDTH.again,maybe/not the spacecraft is sending telemetry... i don't belive that nasa ever tried to take seriously the acceleration,whatever the cause of it is.they at the last contact in 2003 just happend to point the antenna about the place where the P10 is (onto the sky).the signal were weak,only reception not retransmit(coherent mode or radar as generaly know).the problem is not a bigger dish or sending power,IT'S WHERE THE CRAFT IS IN THE SKY.bigger dish means narrower beam,of course(but don't tell nasa).