SpaceX’s flight of their Dragon spacecraft to the International Space Station is finally close to becoming reality. The landmark approach and docking of the private spacecraft will complete the final three out of forty milestones SpaceX is required to demonstrate for NASA’s Commercial Orbital Transportation Services (COTS) program. The Dragon’s ride to orbit, a SpaceX Falcon 9 rocket, is scheduled for liftoff from Cape Canaveral on April 30, 2012 at 16:22 UTC (12:22PM EDT).

On Monday, April 16, NASA and SpaceX held a flight readiness review (FRR) to discuss whether Dragon is ready to fly. During the subsequent press conference, ISS program manager Michael Suffredini called the FRR a success, but both he and his colleagues stressed that a few hurdles remain before SpaceX is given an unequivocal ‘go’ for launch. 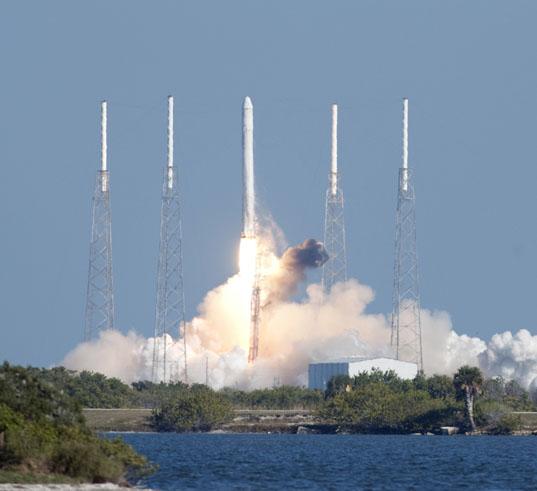 The successful launch of SpaceX's Dragon/Falcon 9 in December 2010.

Those hurdles include more software testing and review, a requirement SpaceX CEO Elon Musk concedes has been one of the primary causes of delay since Dragon’s original November 2011 launch date. Musk stressed that while SpaceX and NASA are confident the Falcon and Dragon have proven themselves in action, “there’s no space station on the ground,” meaning final testing can only be simulated with software before the real thing is attempted in space.

Assuming final software checks pass, there will be no final FRR, and Dragon will be cleared to fly. SpaceX owns the last leg of testing responsibility, which includes a “hot fire” pad test. The Falcon will be fueled with propellant and have its nest of nine engines ignited while securely bolted to the launch pad. That test is expected to occur about a week before flight.

If the April 30 launch date slips, further attempts are set to be staggered every three days.  Traditionally, a vehicle like the space shuttle has a daily launch window when aiming for the ISS, but as Musk explained, the optimum trajectory for low fuel consumption comes only once every three days. SpaceX clearly wants to ensure they have every drop of hydrazine available in the Dragon’s Draco thrusters as it performs its shakedown tests in orbit.

So, how will this unprecedented partnership between NASA and SpaceX work during the flight? NASA flight director Holly Ridings explained that SpaceX will be responsible for launching the Dragon getting it to the imaginary two-by-four kilometer ellipsoid safety zone surrounding the station. The Dragon will cruise through that zone two and a half kilometers under the station, establishing communication with the outpost to say hello. The craft will continue onward out to a distance of 200 kilometers and raise its altitude, reverse course and cruise back past -- this time, above the station -- continuing another 200 kilometers to trace out a large box.

During this time, the technologies originally required for the second Commercial Orbital Transportation Services demonstration flight will be carried out. This includes showing the ability to abort, using absolute and relative GPS tracking, entering free drift, and communicating with and receiving commands from the ISS. 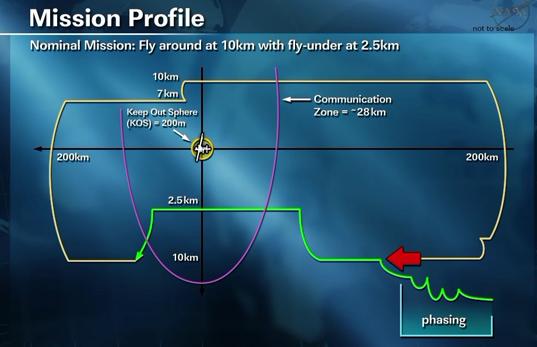 The Dragon will fly through the two by four-kilometer ellipsoid surrouding the International Space Station and make contact, prior to completing other demonstration milestones on flight day three.

Originally, demo flight two would have ended here, with the next objectives to be carried out during COTS flight three. SpaceX, however, convinced NASA to combine demo flights two and three, so on flight day four (May 3 as of now), Dragon will approach the station again.

This time, after a series of additional burns and checkpoints, the Dragon will close to within 250 meters of the station, directly below it, just 50 meters lower than the official “keep out zone.” Under the watchful eyes of astronauts Andre Kuipers and Don Petit, Dragon will use its Light Detection And Ranging (LIDAR) instruments to begin an approach to the station, respond to a retreat command, and enter a hold back where it started at 250 meters. It will then close to 220 meters and await a final ‘go/no-go’ call from NASA before entering the restricted zone.

Dragon will slowly close to a distance of 30 meters and hold again, and then finally -- meter by meter -- close to within 10 meters and hold. At this point, both the ISS and Dragon will enter free drift by deactivating their thrusters, allowing Kuipers and Petit to snag Dragon with the robotic Canadarm2. The two astronauts will haul the capsule over to the Harmony node for docking. 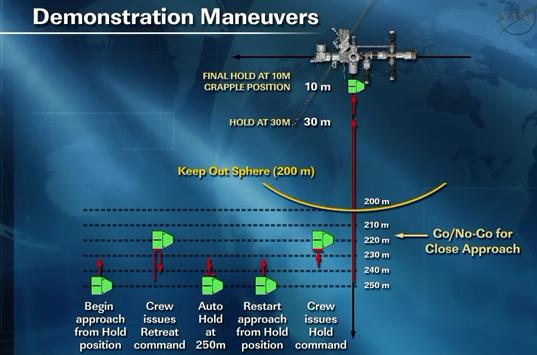 At this point, it will have been a relatively long day for the crew; Holly Ridings estimates it will take a total of eight and a half hours for the final approach, capture and docking. However, it should be worth it: 521 kilograms of cargo -- mostly food and other crew provisions -- will be waiting for them in Dragon. Kuipers and Petit will have to unload the craft with only the help of cosmonaut Oleg Kononenko; crew members Anton Shkaplerov, Anatoly Ivanishin and Dan Burbank are heading home in their Soyuz capsule April 27, well before the Dragon party starts.

Dragon will then be filled with 660 kilograms of cargo for its return trip to to Earth. Kuipers and Petit will undock it using Canadarm2, move it safely away from the station and release it, allowing Dragon to execute a series of burns to start its journey home.

NASA and SpaceX stress that the cargo being sent in Dragon is non-critical, along with the return cargo. After all, this officially remains a demonstration flight, and things can go wrong. Assuming that doesn’t happen, SpaceX will find their capsule bobbing gently in the Pacific Ocean, proudly badged as the first private spacecraft to visit the International Space Station and return safely to Earth.