I set out in search of this answer late Tuesday night. As far as I can tell, the answer is no -- although searching for the absence of a record is more challenging than finding one that exists. Enclyclopedia Astronautica has ten entries related to "docking" in its "manned firsts" article (although the vehicles in question are automated) -- none mention two linkups on the same day by unrelated spacecraft.

Whether a record or not, double dockings are certainly not a common occurrence. On Wednesday at 11:41 UTC, Russia's Progress M-13M resupply craft docked with the International Space Station, delivering three tons of supplies to the orbiting outpost. Hardly six hours later, at 17:28 UTC, China became the fourth nation to perform a spacecraft docking in orbit, as their Shenzhou-8 spacecraft approached and docked with Tiangong-1. Coincidentally, the Progress/ISS docking took place while the station was flying over northern China. 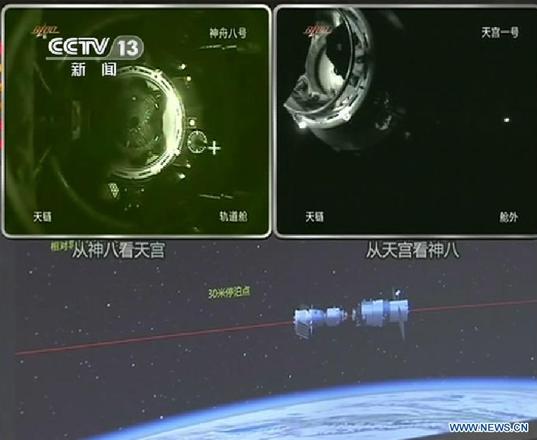 China became the fourth nation to perform a spacecraft docking in orbit, when Shenzhou-8 linked up with Tiangong-1 on Wednesday, November 2.

Let's start with the ISS -- when the Progress capsule pulled into Russia's Pirs docking module Wednesday morning, a collective sigh of relief could be heard by ISS partners around the globe. Progress M-13M's predecessor, M-12M, crashed in south central Russia on August 24 when the Soyuz-U rocket carrying it into orbit suffered a premature third-stage shutdown.

The failure couldn't have come at a worse time. Russia's Soyuz-FG rocket is currently the only means of ferrying humans to the ISS, and its third stage is nearly identical to that of the Soyuz-U. Expedition 28 ended on September 16, when the last three members of that crew returned to Kazakhstan in a Soyuz capsule, leaving the space station staffed with only three members. The current crew -- Mike Fossum from NASA, Satoshi Furukawa from JAXA, and Sergei Volkov from Roscosmos -- is scheduled to come home later this month. Without the prospect of sending up a fresh crew, ISS managers faced the very real possibility that the station would have to be left unoccupied until Soyuz rockets were ready to fly again.

That scenario is now unlikely. Russian engineers traced the Soyuz's problem to a clogged fuel line, and the successful launch of Progress M-13M clears the way for resumed human flights. The second half of Expedition 29 is scheduled to be launched on November 14, consisting of cosmonauts Anton Shkaplerov and Anatoly Ivanishin, along with astronaut Dan Burbank.

Now, back to the Chinese and their historic docking. Last month, a Long March 2F rocket sent China's first space station, Tiangong-1, into orbit. On Monday, Shenzhou-8 lifted off from the Jiuquan Satellite Launch Center, chasing down the prototype space station for two days before reaching it Wednesday. The docking success paves the way for human visits, which are scheduled to begin next year with Shenzhou-9.

If you haven't watched the highlights from Monday's Long March/Shenzhou-8 launch, it's worth checking out. The footage includes shots of the strap-on boosters tumbling away, along with a neat shot from inside of what looks like the second stage engine. You can actually see the engines gimballing during flight. Additionally, the Chinese have a camera rolling from Shenzhou-8 with the payload fairing separates -- pretty cool.

Even cooler is the video of the docking, which was broadcast live on Chinese state television and via the Internet to the rest of the world: