In rock ‘n' roll fashion, SpaceX has shown the world that they're serious about re-usable spacecraft.

On September 29, the company released a four-minute concept video showing flight highlights of a Falcon 9 rocket and Dragon capsule, modified to be fully reusable. Just days earlier, the Federal Aviation Administration issued the draft of an environmental assessment on SpaceX's plans to begin testing Grasshoper, a vehicle they will use to shakedown their reusable components before integrating them into the Falcon 9. The test will take place in McGregor, Texas; you can read the 65 page, 1.4MB PDF here.

Full disclosure reminder: Elon Musk is a current member of the Planetary Society board of directors.

The video is set to the song "Uprising" by the rock band Muse, which was in space news earlier this year when they mentioned an interest in teaming up with Virgin Galactic to play the first gig in space, aboard SpaceShipTwo.

If SpaceX can pull of the feat of a fully reusable launch system, it will almost certainly make the Falcon 9 rocket system the cheapest ride into space, creating a paradigm shift for the way spaceflight is approached. Speaking at the National Press Club, CEO Elon Musk predicted the cost of a Falcon 9 flight could fall to $50,000.

The video is packed with so much eye candy, it's easy to miss some of the details, so let's take a closer look. We start as the rocket stack lifts off from what looks to be Cape Canaveral Air Force Station Space Launch Complex 40, the home of SpaceX's Florida operations. The Falcon 9 blazes nine Merlin 1C engines from its base in a 3x3 pattern. Against the blackness of space, the first stage cuts off and separates, and the second stage deploys four landing legs and ignites a single, large engine. It's not clear from the angle if the engine bell was already in place, or it extended at separation time.

Next, the tumbling first stage fires several small maneuvering thrusters to orient itself parallel to the Earth, before performing its first trick: re-igniting three center engines to slow its forward momentum. The video transitions to the first stage descending gracefully towards the launch pad, perpendicular to the ground, engines blazing. Aerial renderings here are detailed; Launch Complex 39, the space shuttle's old stomping grounds, are visible below. Four landing legs are deployed, and the stage settles upright onto a concrete pad.

As we check back on the second stage, it cuts off its engine and separates from the Dragon capsule. The Dragon fires its thrusters to put some space between the two components. In the next shot, the second stage is beginning its slow free-fall back to Earth, and when we glimpse the underside, we notice that the bell has retracted back into the stage housing, and the four landing legs have closed back together. Similar to stage one, stage two uses thrusters to orient itself, with a twist: the engine bell and landing legs extend again before the engine ignites. 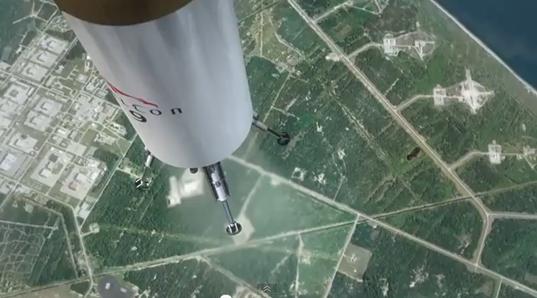 The second stage of the Falcon 9 descends toward Cape Canaveral for an upright landing.

A few questions arise here. Why did the engine bell and legs retract after the second stage cutoff? Why not just leave the bell and legs extended, since the next action was engine re-ignition? Aerodynamics shouldn't apply at this point, since the vehicle is outside of the Earth's atmosphere. Secondly, when the engine re-ignites, is it merely slowing its momentum to prepare for re-entry, or is it going to backtrack all the way to the launch pad? I'm guessing the former is true; it would take a lot of fuel double back at this point. If so, since we see the second stage land at Cape Canaveral, this implies it will have taken at minimum one lap around the Earth when it returns home.

For re-entry, the second stage has again retracted its legs and engine bell, leading with an ablative heat shield. Instead of using its large engine to slow its descent, the stage uses a smaller set of thrusters. The legs expand for the third and final time, cushioning the rocket section as it settles onto a concrete pad.

Will the second stage land at the same exact spot as stage one? It seems audacious to plan on moving the first stage from the pad in what would likely be a mere hour of time, but considering the other feats taking place in the video, this concept actually seems the least far-fetched.

The Dragon capsule approaches and docks with the International Space Station, nudging up next to.. another Dragon spacecraft! The ISS routinely hosts multiple docked spacecraft at the same time, so it isn't an impossibility to envision two Dragons simultaneously attached to the outpost. However, SpaceX may have added this detail simply for the ‘cool' factor. 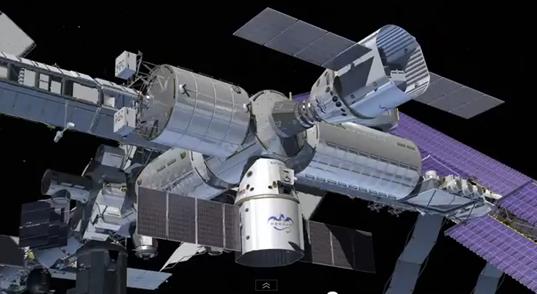 While the video doesn't show it, there's one part of the Falcon/Dragon rocket system that will probably remain disposable: the service module. As the Dragon leaves the ISS, notice that stumpy cylindrical module is still attached, along with the Dragon's unfurled solar panels. When the video switches to a shot of the capsule plummeting through the atmosphere, the module is no longer present.

SpaceX isn't content to parachute the Dragon into the ocean and pay for recovery costs. Instead, the capsule soft lands with the help of four side-mounted engines, deploying four landing legs that look like inverted Ts before touching down.

The big question is: can SpaceX pull this off? There's no denying that the video is impressive, but the company is likely years away from flying a reusable Falcon 9. Traditional spaceflight development models would dictate phasing in the reusable components over time; perhaps we'll see the first stage try a landing on a future flight, while the second stage remains disposable and the Dragon continues to land with parachutes. However, very little about SpaceX's approach to spaceflight is traditional, so we'll just have to wait and see.