The President of the United States invited to the White House winners of several different science, engineering, and math competitions from around the country -- and Me(!?)...

Those of us visiting yesterday's White House Science Fair saw a proposed cure for cancer, a system to discourage driving and texting at the same time, a beautifully planned efficient city, and a prosthetic chair to help a partially disabled classmate.

The young people I met at there have done amazing work. The "best rocketry students in the world," Jordan Franssen and Nathan Bernhardt, just kept winning and winning competition after competition with their outstanding attention to detail and cool use of materials. Speaking of our Planetary Society's Mission, Erika DeBenedictis has a new navigation system for interplanetary flight. Amy Chyao's cancer cure was so well presented that, as I sat next to Steven Chu for half an hour talking about energy policy, I could tell that he was turning her band-gap conduction diagram over in his mind. Unlike many of us, Steven Chu is the Secretary of Energy, and he has a Nobel Prize. This just but one...

On my other side were Adam Savage & Jamie Hyneman of the MythBusters. We all had a great time and were amazed at the quality of the work and the enthusiasm of the young people -- they strengthen our hope for the future. The President really believes in our science business. He pointed out that most top corporations are run by engineers rather than financiers or economists.

That made me proud of course; I am an engineer. We use science, and especially math, to solve problems and make things. In our world right now, there are plenty of problems to solve, and plenty of things that need to be made, and made well.

------------------See the video of President Obama speaking about the importance of science, technology, engineering and mathematics education to the country's economic future after viewing exhibits from science fair winners from across the country. 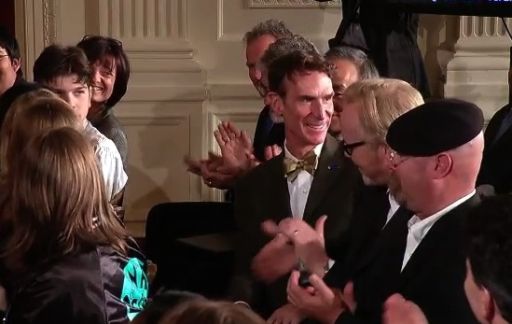 Bill Nye, with Jamie Hyneman and Adam Savage (the Mythbusters_, being introduced by President Obama at the White House Science Fair, October 2010.