I've spent all weekend following the progress (if you can call it that) of the Station fire via every available medium, posting regular updates on Twitter and Facebook. Those have proved invaluable resources for concerned people to share links to sites with up-to-date information. There was a big scare last night when Los Angeles County fire officials stated live on television that within a couple of hours, fire would reach the peak of Mount Wilson, home to Mount Wilson observatory (not just one telescope, but many) as well as 22 television, radio, and cell phone towers.

Well, the night has passed and the fire is not there yet. But the situation is still dire. Firefighter crews defending the mountain -- who were called up from Calaveras County, east of the Bay Area, to respond to the fire -- have spent days clearing brush, cutting firebreaks, setting backfires, and dumping flame retardant in an effort to defend the Mount Wilson towers and telescopes from the fire. Their efforts may yet prove successful. But as of 6:25 this morning, Mount Wilson Observatory director Hal McAlister reported that the U.S. Forest Service has instructed the fire crews to withdraw from the mountain. According to the Los Angeles Times, this is because the fire was on both sides of Mount Wilson Road, the only way up to the peak. The crews are standing by at the turnoff from Red Box Road, about five miles (eight kilometers) away.

In the meantime, the fire has spread to 85,000 acres. That's 133 square miles, or close to 350 square kilometers. Here are the obligatory Terra and Aqua MODIS images of Los Angeles County and the surrounding areas, taken yesterday, when the fire had only reached half that extent: 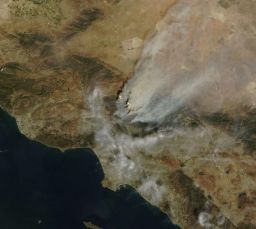 A detailed view of the Station fire burning in southern California at 18:45 UTC (11:45 local time) on August 30, 2009, from the MODIS instrument on the Terra satellite. Full image

The good news is that very few structures have burned, yet. There are lots of evacuations. Only one Society employee has been evacuated. The Jet Propulsion Laboratory is closed to all but mission-critical personnel today, but not because they're under any threat of fire -- it's just because the smoke has made air quality awful in the area around La Cañada Flintridge, Altadena, La Crescenta, and Pasadena.

I have lots of other work to do today but I will be following the news and keeping you updated on the status of Mount Wilson. I'll be Tweeting news as I find it.