Mike Malaska contributed this guest blog entry back in March, at the end of the Lunar and Planetary Science Conference meeting, just after Emily was ordered on bed rest. Emily apologizes profusely to Mike for the long delay in getting this posted.

Titan seems just like Earth, only totally different.Titan is a fascinating world that is incredibly difficult to decipher because of its thick atmosphere, obscuring haze layers, and mysterious surface materials. Titan is now thought to be one of the most Earth-like of planetary bodies, with dunes, lakes, channels, erosion, and volcanic flows. Yet Titan is made of completely different materials, at a different temperature, under a different atmosphere. Understanding Titan will shed light on how our own planet works, but Titan does not give up her secrets easily.

Like the story of the blind men examining an elephant, each Cassini instrument gives a different view of Titan, but no instrument by itself can reveal an unambiguous story. Many of the talks and posters presented at the Lunar and Planetary Science Conference in March attempted to tease out the details of Titan's surface and surface processes by using Cassini data in creative combinations.

In a visually beautiful and scientifically meaningful example of combining datasets, Randy Kirk and co-workers studied places where two Synthetic Aperture RADAR (SAR) swaths overlap. Radio waves can cut through the atmosphere to observe Titan's surface, but the instrument can be used in its SAR imaging mode only during Cassini's closest approaches to Titan's surface. Unlike photographic images, in which more reflective areas look brighter, SAR data provides information on terrain roughness. With SAR, areas rough at the wavelength of the RADAR wavelength (about 2.2 centimeters or 1 inch for Cassini) appear bright, while smoother areas appear dark. The RADAR instrument can also be used to gather altimetric information -- a profile of the topography of the ground under Cassini -- but when the RADAR dish is being used to acquire SAR , it can't be used to easily acquire altimetry data. So the altimetry data is usually acquired only at the very final tip of the RADAR Swath, just as the SAR RADAR swath resolution drops off.

There is more than one way to get at altimetry, however. As more and more of Titan's surface is covered by RADAR (25% so far), some of the RADAR swaths are beginning to overlap. 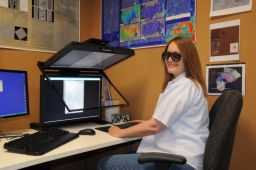 The 3-D elevation maps provide critical information for teasing out the surface geology of Titan. The RADAR instrument has acquired only a few short altimetry tracks to date, but with the new maps entire regions are now being topographically charted. One example is the northern polar lake region of Titan (see Emily's writeup here).

Topographic map of lakes on Titan

The image strip on the top of this map is the area of overlap between two SAR swaths across Titan's north polar lakes region that were acquired within weeks of each other: the February 22 and April 11, 2007 flybys (T25 and T28). Using a computer program that matches terrain features in the two images, workers at the United States Geologic Survey produced the topographic map of the region shown below it.

While the arguments supporting Ganesa Macula as a cryovolcanic dome became weaker after the acquisition of 3-D stereogrammetry, the evidence supporting another feature as a cryovolcanic province became stronger. On Titan's mysterious bright continent of Xanadu, a region named Hotei Arcus has been observed to change brightness over a period of days (a result presented at the LPSC meeting by Robert Nelson and his co-workers on the Cassini Visual and Infrared Mapping Spectrometer team). Recent SAR images revealed blobby structures inside Hotei that are thought to be "cryobasalt" flows -- lava flows on Titan made of molten ammonia-water ice. Could this be a massive cryocaldera, a cyrovolcanic province equivalent to Yellowstone or the Snake River plain? Stereogrammetry of two recently acquired SAR swaths helped define the relationships between the blobby flows and other terrain features seen in the SAR RADAR image. 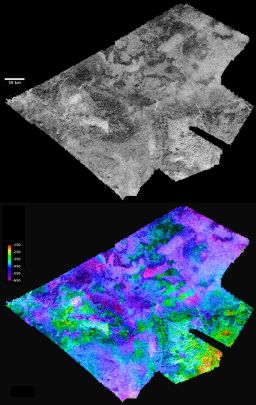 Top: SAR image of a portion of Hotei Arcus on Titan. In SAR images, bright regions have rough surfaces, while darker areas are smooth. Uniform lobate (blobby) shapes in the center of the feature are thought to be overlapping cryovolcanic flows.

Bottom: 3-D stereogrammetry of the same region, created through computer processing of two overlapping SAR swaths acquired during flybys on February 22, 2008, and May 12, 2008 (known as T41 and T43). Purple is lowest elevation and red is highest. In the upper right corner, there is a blue region whose boundaries match the lobate feature visible in the SAR image; its color indicates that it lies 100 to 200 meters above the lower-lying purple plains. Therefore the elevation information corroborates the notion that this lobate feature is a frozen flow of icy lava. The height difference from the flow to the floor of Hotei suggests that cryolava flow was very thick and viscous when it was fluid. Why its edge is RADAR-dark (hence, smooth) is mysterious.

The USGS team created a flyover movie of the Hotei Arcus stereogrammetric image that you can download here.

Combining many types of data from Cassini -- cameras, infrared spectrometers, and SAR, and stereogrammetry -- a picture begins to emerge of what Hotei Arcus would look like from the surface. The image below is an artist's view of what could be one of the largest active volcanic provinces in our solar system. 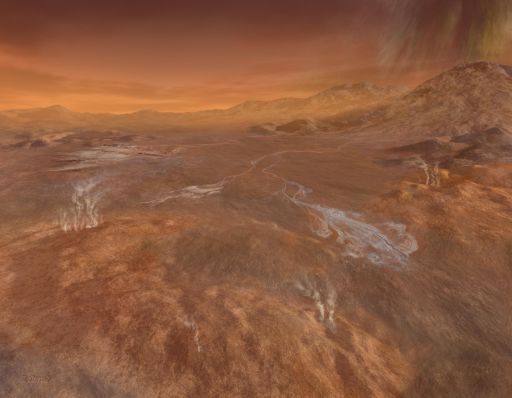 Artist's concept of methane rain falling over Hotei Arcus. "Cryolava" flows in the foreground partially cover the end of a channel that winds upstream to tectonic ridges at the rim of a feature named Hotei Arcus. The viewpoint is approximately from the southwest edge of the Hotei Arcus depression, looking northeast.