Another in my series of audio blog posts about the inauguration of the ALMA Observatory in Chile's Atacama Desert.

Sunday morning in Santiago.  The remaining journalists arrive today for our ALMA adventure.  I'm glad I came in a day earlier.  It allowed me to take a long, wonderful walk along the parkway facing our hotel.  It allowed me to spend a few minutes at Starbucks, just across that parkway.  (Don't act surprised.  You know they are everywhere.) And it allowed me to join four wonderful dinner companions from the National Radio Astronomy Observatory.

One of them was electrical engineer Skip Thacker.  As I understand it, Skip was in charge of developing the "front end" electronics for each of ALMA's 66 dish antennas. He has just retired, but he couldn't miss the inauguration ceremony.   It's hard to single out any one component of the array as critical, but the front ends are right up there.  They are the first system to "see" or hear an infinitesimal signal that has traveled for 10 billion or more years to get here.  So these are amplifiers beyond compare.  Skip and I had a fascinating conversation about the liquid helium circuits used to cool the front ends to nearly the ambient temperature of the universe, a handful of degrees above absolute zero.

We reached our destination, a delightful fish restaurant, a few minutes after 8pm.  That made us early birds in Chile.  Dinner doesn't really get rolling here till about 9.  And dinner was wonderful.  I refused the wine, but I couldn't resist trying a Pisco Sour.  This cocktail, I was told, is the national drink of Chile, though there are more than few Peruvians who would call those fighting words.  It was delicious...and very effective.

The conversation eventually turned to ALMA and radio astronomy in general, and to the relative poverty of many US science programs when compared to NASA.  I've heard the same from other agencies, including NOAA.  Everyone admires what NASA accomplishes.  They'd just like a bigger piece of the action.

For all of its accomplishments and facilities, the NRAO is a pretty thin operation--only about 400 staff members, many of whom wear several hats.  And yet, it builds and manages huge projects like New Mexico's Very Large Array that I visited in 2011, and is the US agent for the country's impressive involvement in ALMA.

Tania Burchell is the NRAO's science writer and media producer. (RadioAstroGal on Twitter.)  Think of her as an amalgam of what Emily Lakdawalla and I do for the Planetary Society.  She loves sharing her love of radio astronomy.  I think it was Tania, though it might have been John Stoke or Charles Blue, who told me that ALMA already has about ten times the resolving power of the Hubble Space Telescope, after taking a few caveats into consideration.  And Skip Thacker assured me that the best is yet to come, as electronics evolve, as new software code is implemented, and as the big dishes spread out further across the high plain.  Skip thinks this mighty tool will be at the forefront of astronomy, surprising scientists and laypeople alike for a couple of decades.

Tomorrow we fly to the Atacama and get our medical tests.  I've learned that those of us who go to the high site will be packing oxygen.  Should make for a great photo or two.  See more of my Santiago photos in Flickr.  Ciao for now. 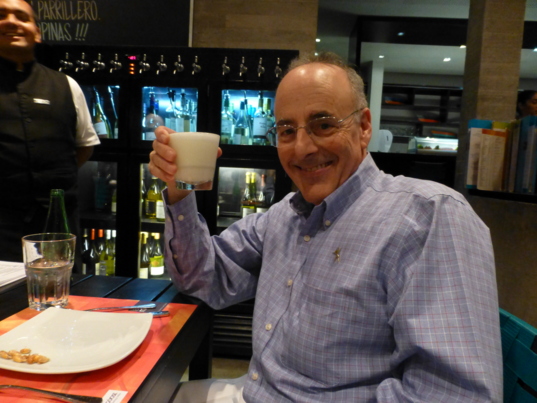