Some evening last winter I was idly looking out the window from our bedroom when something caught my attention -- a distant steady, bright green, light penetrating a screen of trees. Every so often it turned red. A traffic light, of course- no big deal. But I'd never noticed it before, and now it had finally registered on my consciousness, for some reason I became quite intrigued about where it might be. Hard to tell from direct observation -- I couldn't see anything but the trees during the day, and just the disembodied light at night. There was only one way to find out. One April evening, I set off by bike to my number one candidate traffic light, which I'd identified with the help of Google Earth. When I arrived, I phoned my wife Jane back at home -- she was ready in the bedroom with her binoculars. "It's turning red... now!" I reported, and she confirmed that the light she saw turned red too. Yes! But after that, the light I was standing under and the mystery light that she could see refused to synchronize -- clearly we were seeing different lights, and my hunch had been wrong. The next plausible candidate was a mile further away, and it was starting to rain. But I was hot on the trail, and wouldn't let a little precipitation put me off. Ten minutes later, and somewhat wetter, I called her again from the next candidate. Nope -- no correlation between that light and the one she could see. It was now raining in earnest and I figured it was time to admit defeat. But as I turned for home I noticed another light further up the hill. It was worth one more try, so I called Jane again. My light turned green, Jane's turned green. Mine turned red, Jane's did the same. Victory! By the time I got home I was soaked to the skin, but triumphant. Now (or at least until the trees leafed out), I could see that light from home and have the small satisfaction of knowing exactly where it was.

What does this have to do with exploring the planets? Maybe not much, except that it's human nature to be intrigued by the mysterious, and to take great satisfaction in solving those mysteries. It's so satisfying that sometimes we have to invent inconsequential mysteries, whether it's a whodunit or a stoplight, just for the fun of solving them. The Solar System teems with mysteries. Why are Venus and the Earth so different? Why are there massive canyons on Mars? What is the source of the plumes of Enceladus? Why are there brown and gray Kuiper Belt Objects in all sorts of orbits, except that every Kuiper Belt Object in a flat, circular, orbit is brown? We write funding proposals giving very good reasons why it's important to answer these questions -- to understand our place in the universe, to pave the way for future exploration, and so on. But much of the time, it really boils down to, "What's that mysterious light? Let's find out!"Plug of the Day
y first job in planetary research, as a summer intern at the Lunar and Planetary Institute in Houston in 1978, involved poring over some of the incredibly detailed images of the Moon taken by the automatic mapping cameras carried on the last three Apollo missions. I loaded fat rolls of transparency film into a huge viewing machine that projected a tiny portion of each image onto a screen, and I could turn a mechanical crank and watch the lunar landscape scroll by. The film I was allowed to touch was of course several generations of copies removed from the original negatives that the astronauts brought back, and suffered in quality as a result. In fact, the original negatives have never been available for public viewing or for scientific research. Now, thanks to the Apollo Image Archive project, the precious original film is being digitally scanned, and full-fidelity digital reproductions are gradually becoming available online as the work progresses. Now anyone can watch the lunar landscape scroll across their screen, and imagine they're looking out the window of the Apollo command module, as I did in 1978. Or, come to think of it, you can watch the modern equivalent in amazing HDTV from the Japanese Kayuga spacecraft, which is currently orbiting, and filming, the moon at very low altitude prior to impacting the surface in a couple of days, on June 11th. 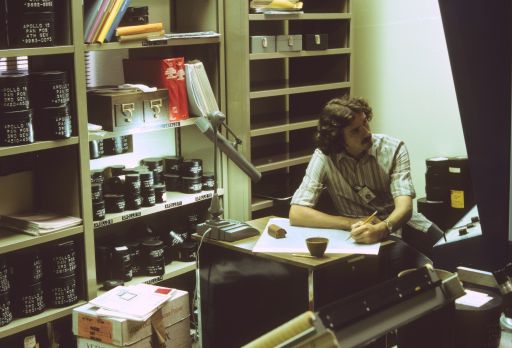 
hat's me, examining Apollo mapping camera images on a film projection system at the Lunar and Planetary Institute in June 1978. The film copies were stored in the black cylindrical boxes filling the shelves on the left.