Over the weekend, sharp-eyed Cassini-watchers on unmannedspaceflight.com noticed a series of way-cool photos on the mission's raw images website. Here's a full-frame view, captured some time on April 8. 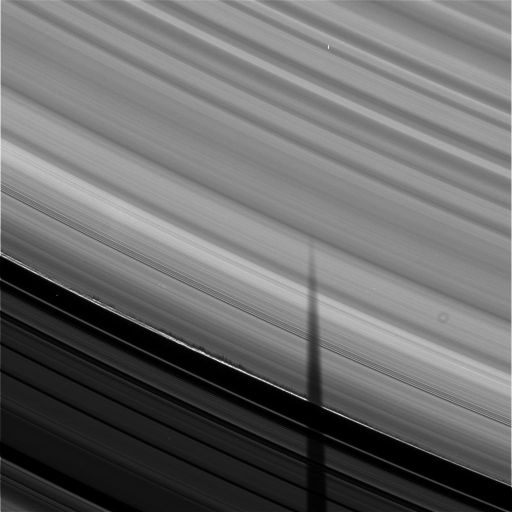 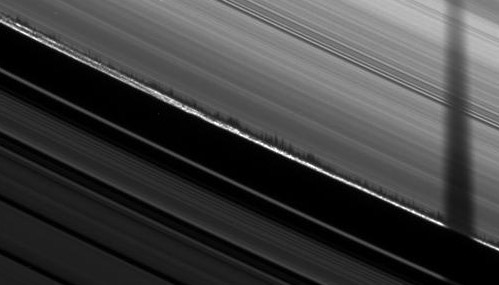 Once the first shock of amazement has worn off, questions start to arise. What's casting those shadows? Are those moons? Well, the first thing to ask is, how tall are the things that are casting the shadows? To know that, we need to know the scale of the image. The Cassini website says Cassini was 1,141,262 kilometers away from the rings when it took the photo, which would give you a scale of (1,141,262 kilometers x 0.000006 radians, which is the angular resolution of the narrow-angle camera) = 6.84 km/pixel, but I've never known what to make of the range given for Cassini to the rings, since the whole ring system stretches 280,000-plus kilometers in diameter. The range could be to the closest point on the rings, with Cassini looking at an angle, which would mess up the scale calculation a bit. Also, since Cassini's view on the rings is a foreshortened one, the longitudinal scale could be quite different to the radial scale.

Fortunately, Cassini is far enough from the rings that we can see enough of the ring system in the frame to know where we are in the rings. See how there's a bright section in one corner, then a dim one with rhythmic gaps? I recognize that dim, rhythmic-gap area -- it's the Cassini division, the dark, dusty region that separates the A and B rings. So all that interesting shadow-casting topography is at the outer edge of the B ring, where there are very strong effects from an orbital resonance with Mimas. Even more fortunately, the IAU just formally approved names for all those gaps in the Cassini division, identifying their locations in the process, so that gives me a good radial scale for the image. (I wrote a blog entry on that here.) Here's a segment of the ring image with a few of the gaps labeled with the Y positions of the gaps in pixels. 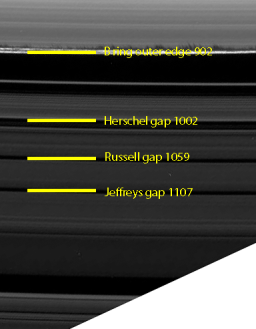 All right. So how big are the objects casting shadows? Well, the shadows are not quite perpendicular to the rings, but they're not far from perpendicular, so I'm going to assume the 7 km/pixel scale is pretty close to correct. The longest shadow I find in the image is 15 pixels, or 105 kilometers (let's just call it 100) long.

What does that mean about the height of what's casting the shadow? The reason we can see these shadows at all is because the angle that the Sun's rays makes with the rings is really low right now, so close to the equinox. Björn Jónsson tells me it's 1.9 degrees, in fact. I have to assume that the surface on which the shadows are being cast is perfectly horizontal (which it may not be, quite, but it's the only way I can proceed, so I'm going to go ahead and make that assumption). With a little trigonometry (let's see, tan 1.9 = object height over shadow length, so it's 100 km x tan 1.9 or) a little over 3 kilometers.

Wow! Is the edge of the B ring made of a pile of moons 3 kilometers across? Hold your horses. Three kilometers is the same as the diameter of some of the smaller moons of Saturn, like Methone, Anthe, and Pallene, and it's quite a bit bigger than the most recently discovered S/2008 S1. I believe that what we're actually seeing is clumpiness of particles at the outer edge of the densest B ring, where particles bunch together partially by self-gravity (which would make them more like moons) but also by the periodic gravitational shoves they get from Mimas. At least that's what the imaging team has said about past images of the outer edge of the B ring, like this one. These clumps would be transient, torn apart by the same forces that bring them together. The B ring is so dense that particles rub up against each other as they orbit Saturn. (We know that because it's opaque to light, and even to radio waves). So an astronaut would be able to travel easily from one particle to the next, clambering around the rings, though it'd be a long trip to circle Saturn! And, evidently, the astronaut would have some climbing to do, traveling up and down the clumps of big particles that form the B ring's outer edge.

That long shadow in the original image? It's cast by Mimas, which is cool, because even though Mimas is well out of the frame (it's roughly 70,000 kilometers away from the outer edge of the B ring, which would be 10,000 pixels, or roughly 10 Cassini narrow-angle camera images end-to-end, at this range), it's the one responsible for making this mountainous mess of Saturn's B ring.

The image I posted at the top of this blog entry is just one of many taken in a sequence of Mimas' shadow passing along the rings. The guys at unmannedspaceflight.com have animated some of the photos to see if they can detect any motion within the clumps at the edge of the B ring, but I can't convince myself I'm seeing anything real among the artifacts caused by the JPEG compression of the raw images. We'll have to wait for the release of the photos onto the Planetary Data System about a year from now to be able to see what Cassini's camera shows us at that level of detail. In the meantime, I'm quite sure we'll be seeing some nice versions of at least one of these images in a release from the imaging team -- stay tuned!

As a postscript, I have to mention that the entire time I've been writing this blog entry, Cat Stevens' Moon Shadow has been running through my head...when I was an infant, my parents owned an orange and white Volkswagen bus named Moon Shadow...