I'm practically the last space blogger in the world to get to this (and it was only released this morning! How can I compete with that?), but I think it's worth giving my take on it anyway: a beautiful photo captured by the Hubble Space Telescope in natural colors, showing Jupiter and its largest moon Ganymede. Ganymede was just setting behind Jupiter's limb when the photo was taken; the photo was actually part of a series taken through many filters, watching as Ganymede passed behind Jupiter. Most people are showing a version of the image that has been rotated to make Jupiter's cloud bands horizontal, so, just to be different, I'm posting the image in its original orientation, which reveals much more of Jupiter. 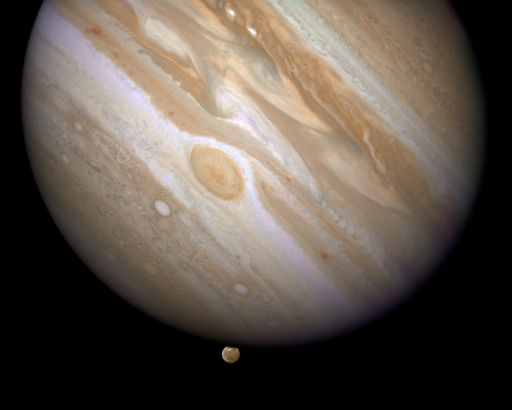 The image is neat, but why was it taken? Time on the world's most expensive optical telescope isn't just given to anybody to take pretty pictures with. Thankfully, the Hubble website does an unusually good job of documenting their press release photos. There's always a "Fast Facts" page giving lots of technical details on the photo, and they usually include the proposal number submitted by the scientist when he/she was seeking to be granted the time on the telescope in the first place. In this case, the scientist was Erich Karkoschka of the University of Arizona, and the proposal number was 10468. Plugging those details into Google quickly gets me to the page at the Space Telescope Science Institute website with all the details on the proposal, and from there I can follow some links to find a detailed explanation, written by Karkoschka, of the justification for the sequence of photos.

I propose to observe a disappearance of Ganymede behind the dark limb of Jupiter with five filters of the ACS/HRC camera. Two exposures in each filter can be taken during such an event. The images will provide the spectral variation of the altitude of the apparent limb of Jupiter. The altitude of the apparent limb is dependent on the presence of hazes in Jupiter's stratosphere. Hazes of vertical optical depths below 0.001 could be detected with these observations, providing an extremely sensitive probe of high hazes. The observations probe altitudes levels near the 1-mb pressure level, for which we have very limited data.

The creation of aerosols, their growth, and their transport by winds is currently a mostly theoretical study. It would significantly benefit from constraints derived from the proposed observations. ACS/HRC is the only instrument capable of the required spatial resolution in the ultraviolet. Furthermore, a favorable geometry of Ganymede's orbit occurs only once every six years. This proposal achieves unique results with a minimum of HST time.